“This view from NASA’s Cassini spacecraft looks toward Saturn’s icy moon Dione, with giant Saturn and its rings in the background, just prior to the mission’s final close approach to the moon on August 17, 2015.

At lower right is the large, multi-ringed impact basin named Evander, which is about 220 miles (350 kilometers) wide. The canyons of Padua Chasma, features that form part of Dione’s bright, wispy terrain, reach into the darkness at left.

Imaging scientists combined nine visible light (clear spectral filter) images to create this mosaic view: eight from the narrow-angle camera and one from the wide-angle camera, which fills in an area at lower left. The scene is an orthographic projection centered on terrain at 0.2 degrees north latitude, 179 degrees west longitude on Dione. An orthographic view is most like the view seen by a distant observer looking through a telescope. North on Dione is up. 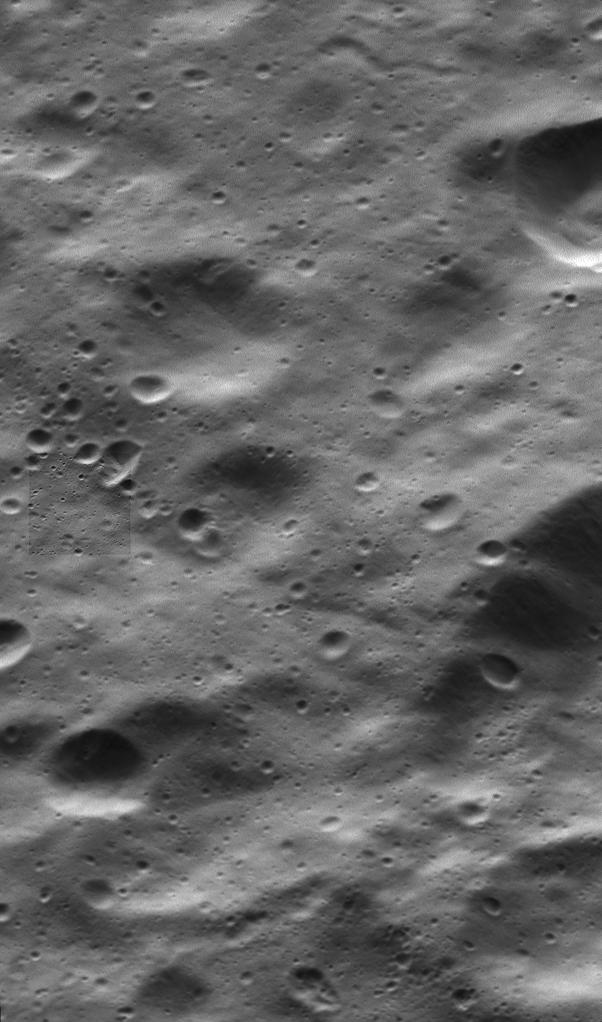 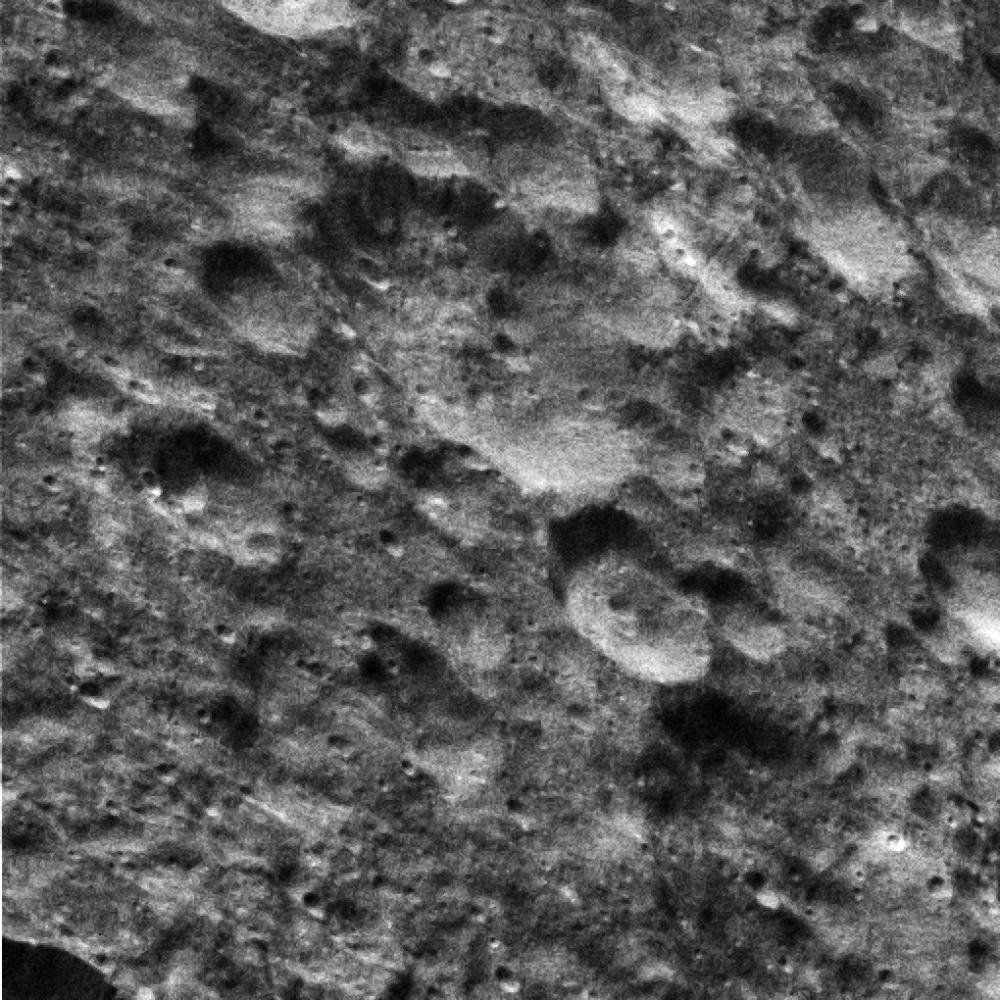 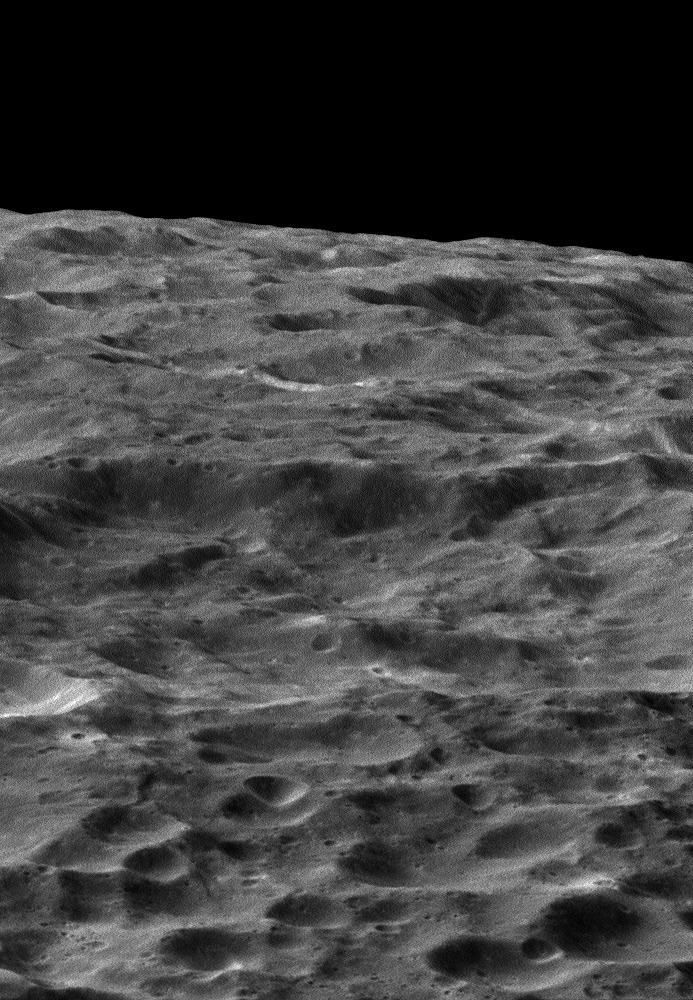 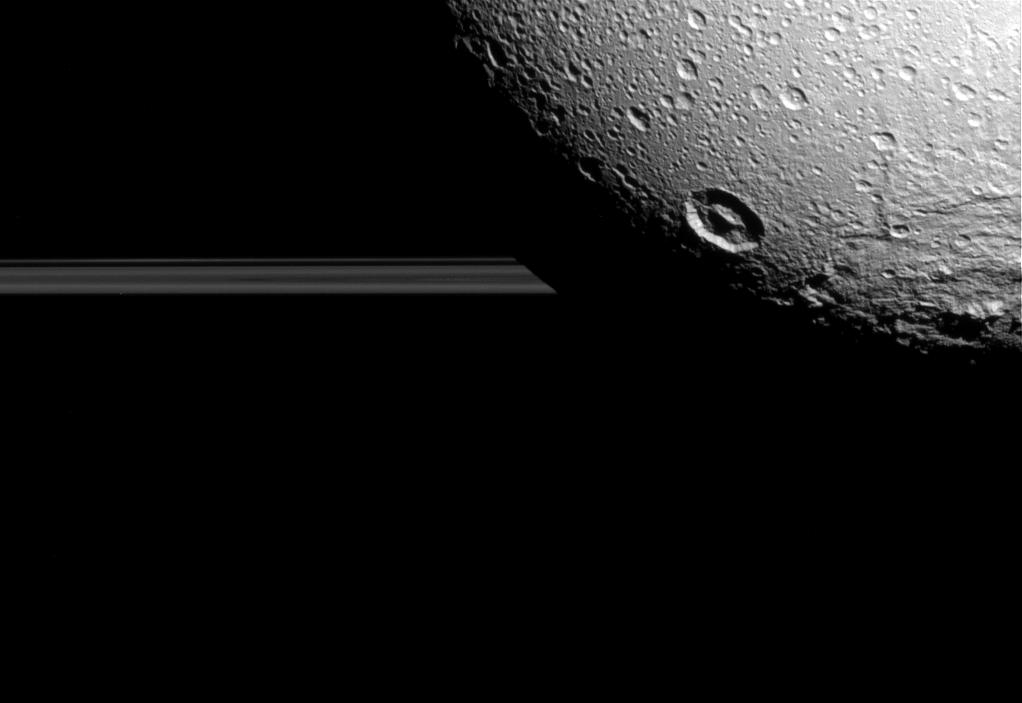 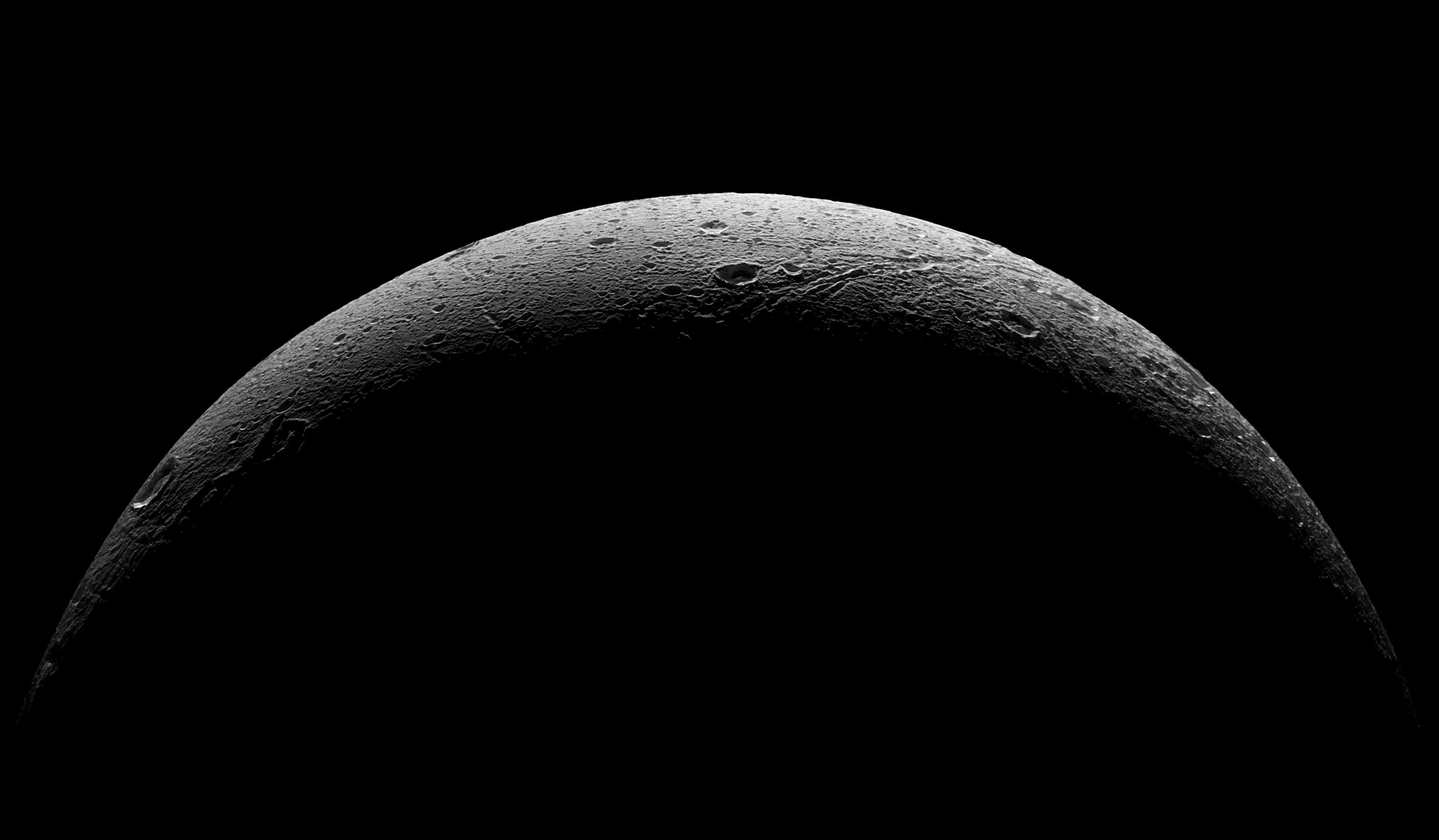 I wondered what the orbit of the Cassini spacecraft would look like during the Dione encounter, so I fired up NASA’s Eyes on the Solar System (a free downloadable app) and set the app date to that of the encounter: 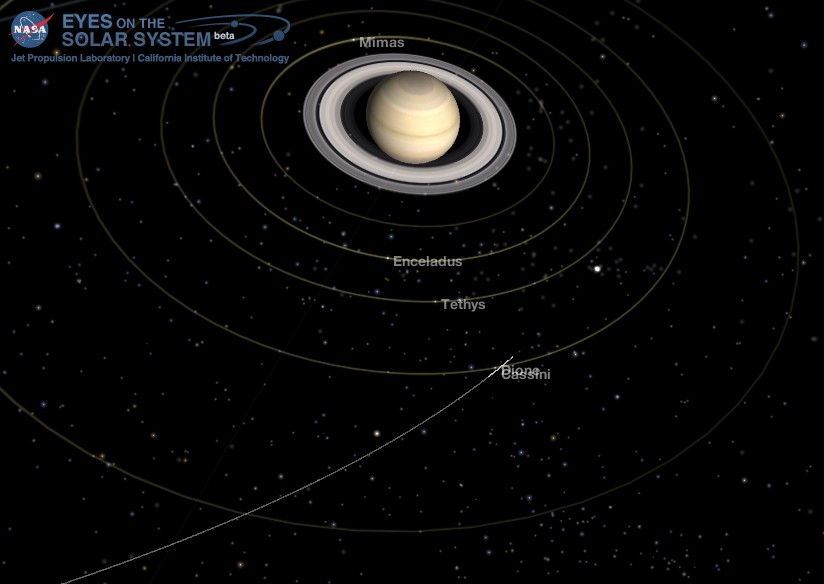 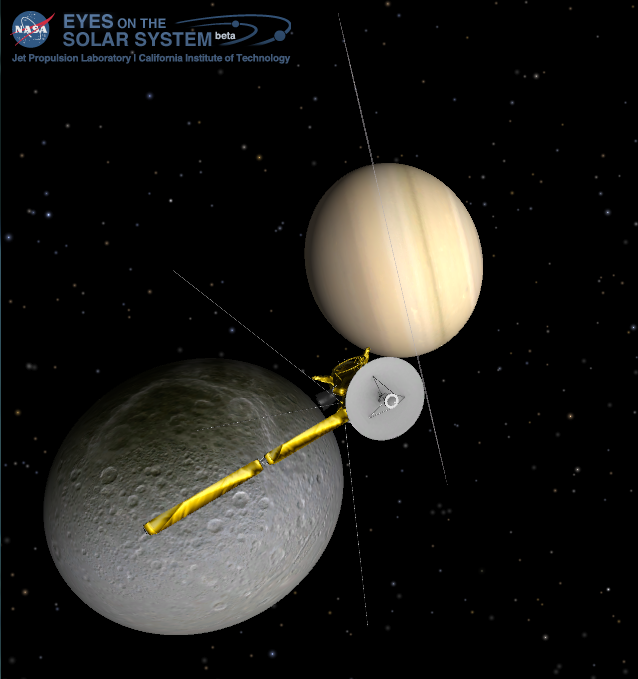 Cassini, Dione, and Saturn during the Dione encounter. Image credit: NASA Eyes on the Solar System

The Cassini mission is nearing its end; during April of 2017, Cassini will have an encounter with Titan, which will alter its trajectory into what is called a proximal orbit – bringing the spacecraft between Saturn’s innermost D-ring, and cloud tops (hopefully not impacting any unseen ring material at this altitude – mission specialists did look for it there). 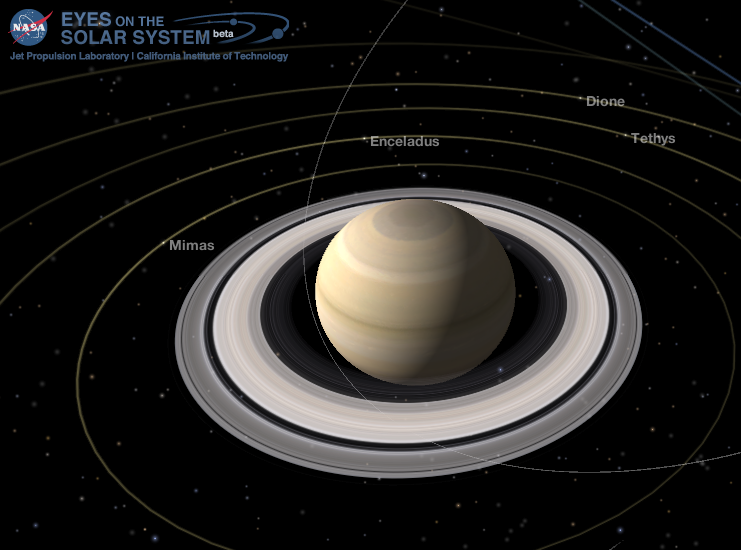 At this position, Cassini will be able to observe ring vistas that were formerly only the realm of Science Fiction artists. 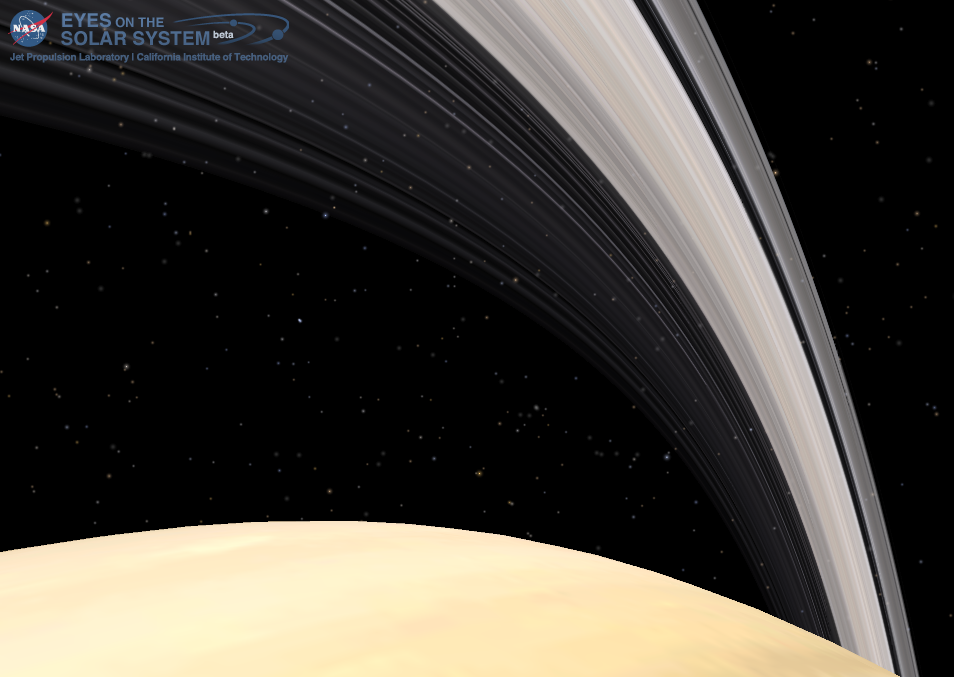 There are a proposed 22 of these proximal orbits planned, after which the Cassini spacecraft will dip into Saturn’s atmosphere and incinerate, leaving behind the legacy of a fantastically successful outer planet mission