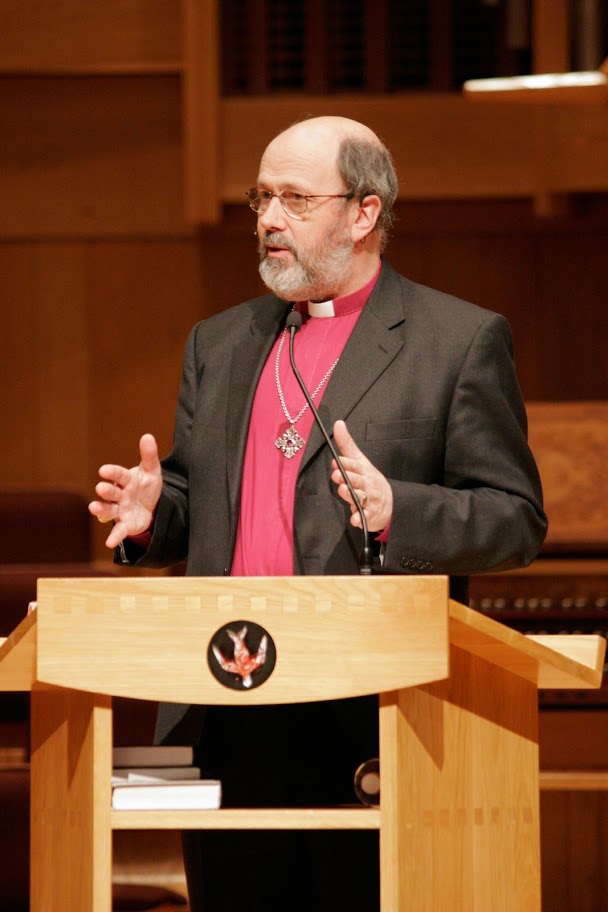 NT Wright lecturing on the Sacraments of Baptism and Eucharist at the Calvin Institute of Christian Worship.

One of my favorite Biblical Scholars is NT Wright. His fresh, engaging, and accessible reflections make studying Scripture delightful. Drawing upon his expansive study of Scripture and his pastoral experience as an Anglican Bishop, NT Wright’s understanding of Scripture always strikes me as intellectually deep while being profoundly accessible and pastoral.

One of the main Scriptural insights of NT Wright is what can be call a “New Creation” theology. This theology seeks to weed out a soft Gnosticism that sees life on earth as a temporary annoyance as we wait for the beginning of eternity. Instead, New Creation theology affirms the coming together of creation in its current state (broken, yet beautiful) with God’s redemptive love and grace that breaks into creation, restores creation, and brings about a New Creation.

A simple way to explain NT Wright’s understanding of New Creation theology is that God comes to set humanity right so that, through humanity, God can set creation right. Therefore, NT Wright’s New Creation theology not only impacts the human person, but extends to all of creation. This theology does not see creation as God (pantheism), but rather creation is “flooded with God’s grace,” to borrow a poetic image from Dr. Wright, affirming the omnipresence of God.

The social implications of this theology of New Creation are profound and practical. Amid a world that knows poverty, brokenness, loneliness, war, and division, God seeks to break in and, through those who have been touched by God’s grace, heal the brokenness of creation and restore it as the place of God’s dwelling among the human race. This theology is not a theocratic vision in which God imposes an oppressive, deductive social structure that demands blind obedience. Rather, this theology is a move of inductive liberation, rediscovering the person God calls us to be individually, the people God calls us to be as a community, and how we are to act in relation to the world as “Citizens of the New Creation.”

As I read and listen to NT Wright talk about New Creation theology, I can’t help but think of the Eschatological Reality. This principle of kingdom theology affirms that, through the life, death, and resurrection of Jesus Christ, the Kingdom of God has been established. However, the full realization of the Kingdom will not be fully known until the final judgement. Therefore, the Kingdom of God is slowly revealed to us, analogous to a table cloth being slowly pulled off revealing the wood of the table, making the Kingdom of God something that is simultaneously revealed in the moment, but whose full manifestation is forthcoming.

One of the important applications of this theology of a New Creation is the understanding of Sacrament. As part of a series of lectures he gave at the Calvin Institute of Christian Worship, Dr. Wright affirmed the Eastern Christian theology of the sacramentality of creation. With passionate oratory, Dr. Wright spoke of a world which was once and still is “charged with the grandeur of God” and will once again be the world that “thrills and throbs with the life of God.” To emphasize this unique vision, Dr. Wright quotes the poem of Gerard Manley Hopkins entitled, “God’s Grandeur.”*

The world is charged with the grandeur of God.
It will flame out, like shining from shook foil;
It gathers to a greatness, like the ooze of oil
Crushed. Why do men then now not reck his rod?
Generations have trod, have trod, have trod;
And all is seared with trade; bleared, smeared with toil;
And wears man’s smudge and shares man’s smell: the soil
Is bare now, nor can foot feel, being shod.

And for all this, nature is never spent;
There lives the dearest freshness deep down things;
And though the last lights off the black West went
Oh, morning, at the brown brink eastward, springs —
Because the Holy Ghost over the bent
World broods with warm breast and with ah! bright wings.
(~ Hopkins, The Grandeur of God)

From a Catholic perspective, there are obvious differences between the sacramental theology we hold in comparison with Anglicanism and other denominations. Presuming these differences, what so strikes me about NT Wright’s view of sacramentality is how God transforms creation to transform us. Dr. Wright explains that when the community of faith comes together in prayer, invoking the words of Institution (this is my body, this is my blood) over gifts of bread and wine, the gifts we present are transforms (bread and wine into the Body and Blood of Christ) so that we, in turn, can be transformed, becoming that which we receive – an expression of God’s love to the world. Through this transformation, we begin to see the world through sacramental eyes, discovering a new creation emerging before us.

To borrow an idea from Pope Francis and his new Works of Mercy for the care of our common home, New Creation theology unmasks the selfishness, exploitation, and anthropocentric mentality that comes when we see our world and the people on it as nothing more than things to be used and discarded. Instead, the sacramental life of the Church intuits what New Creation theology teaches: Just as the Eucharist transforms creation into Christ’s Body and Blood, so, too, does God’s grace bring about a New Creation, transforming what was broken into the very holiness of God. These reflections remind me of the thought of Pope Emeritus Benedict XVI and his application of Teilhard De Chardin to sacramental theology.

“Let Your Church offer herself to You as a living and holy sacrifice”. This request, addressed to God, is made also to ourselves. It is a reference to two passages from the Letter to the Romans. We ourselves, with our whole being, must be adoration and sacrifice, and by transforming our world, give it back to God. The role of the priesthood is to consecrate the world so that it may become a living host, a liturgy: so that the liturgy may not be something alongside the reality of the world, but that the world itself shall become a living host, a liturgy. This is also the great vision of Teilhard de Chardin: in the end we shall achieve a true cosmic liturgy, where the cosmos becomes a living host. And let us pray the Lord to help us become priests in this sense, to aid in the transformation of the world, in adoration of God, beginning with ourselves. That our lives may speak of God, that our lives may be a true liturgy, an announcement of God, a door through which the distant God may become the present God, and a true giving of ourselves to God. (Pope Emeritus Benedict XVI, Homily at Vespers, July 24, 2009)

These reflections make me think of how the practical effect of God’s grace is simultaneously profound and subtle. When looking at someone whose life knew no love of God and then, through God’s grace, experienced a profound conversion of heart, the profundity of a “New Creation” is self-evident. At the same time, this person still looks the same, talks the same, and doesn’t display an physical change whatsoever, pointing to the subtlety of God’s grace. On the level of the profound, a change is self-evident. On the level of subtlety, an untrained mind and heart may never perceive any change at all.

The same can be said of our theology of the Eucharist. When looking at the Eucharist as the Real Presence of Christ, our Source and Summit, and our food for the journey (viaticum), we are taken with profound awe and wonder at how God allows an intimate exchange between Christ and humanity through the Sacrament. Yet, on the level of subtlety, no perceivable change has occurred to the appearance or “accidents” of the Eucharist (save a Eucharistic miracle which is something distinct from our theology of Transubstantiation).

For those whose life is centered upon the Eucharist, the Real Presence of Christ is so transformative that removing one’s self from this Sacrament creates a palpable void in one’s spiritual life, calling them back to this sacred meal. Yet, to the heart that has yet to be touched by grace, the Eucharist seems an odd mystery as the lack of a measurable, observable change closes the heart to the profound transformation that has occurred at the level of essence.

I can’t help but think that this is part of what NT Wright means when he speaks of God’s world and our world meeting in a New Creation. It isn’t two worlds crashing into each other like colliding galaxies. Rather, it is one world that yearns to be renewed by grace, preparing us for a reality at the final judgement that we cannot begin to fathom apart from the climax of the Paschal Mystery: The Resurrection.

Spiritual Exercise: Profundity and Subtlety – What are the profound and subtle movements of God’s grace in your life? How has God revealed his love to you through creation? Pray with these questions and, together, may we be a new creation through the grace offered to us through the Sacraments. Sacraments that remind us of how God seeks to bring about a new creation in our midst, transforming a broken world of sin into a world of love, compassion, hope, and peace.