Later this week, I will have the honor of being one of the presenters at Vision 20/20 in Davenport, Iowa. This event is three days and has as its theme “From Pentecost to Pentecost.” The heart of this event is to explore the New Evangelization through the eyes of Pope Francis’ Apostolic Exhortation, The Joy of the Gospel. When looking at the list of speakers, it becomes clear that this will be a wonderful event for the people of Davenport! 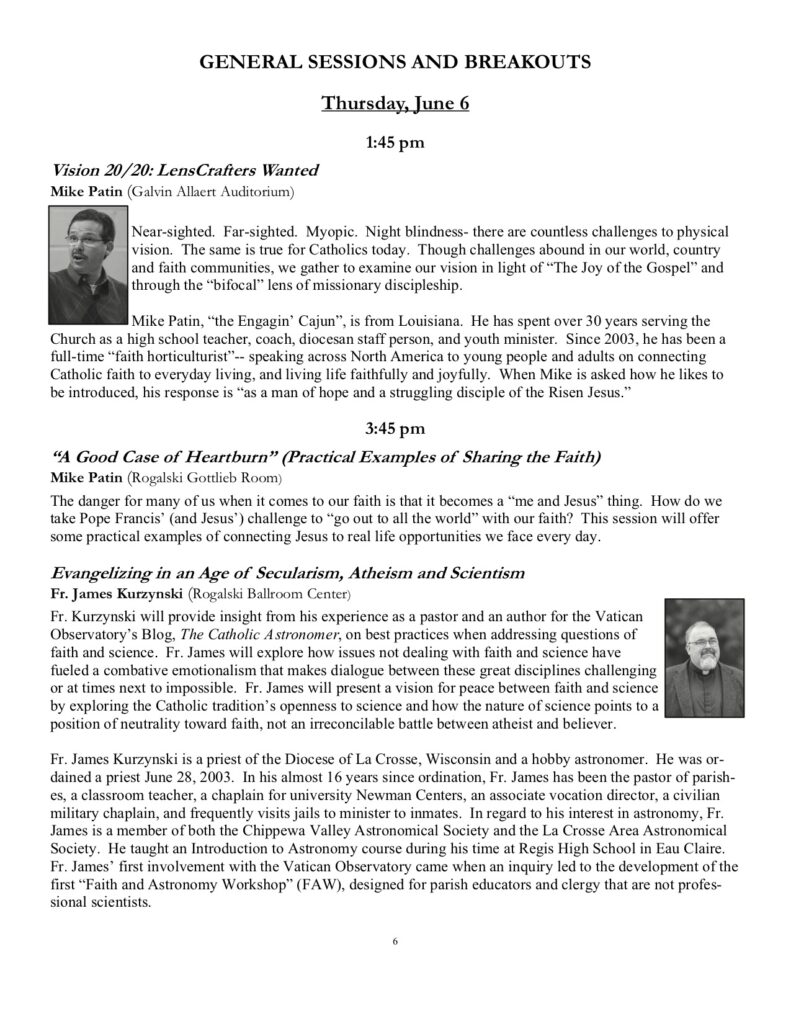 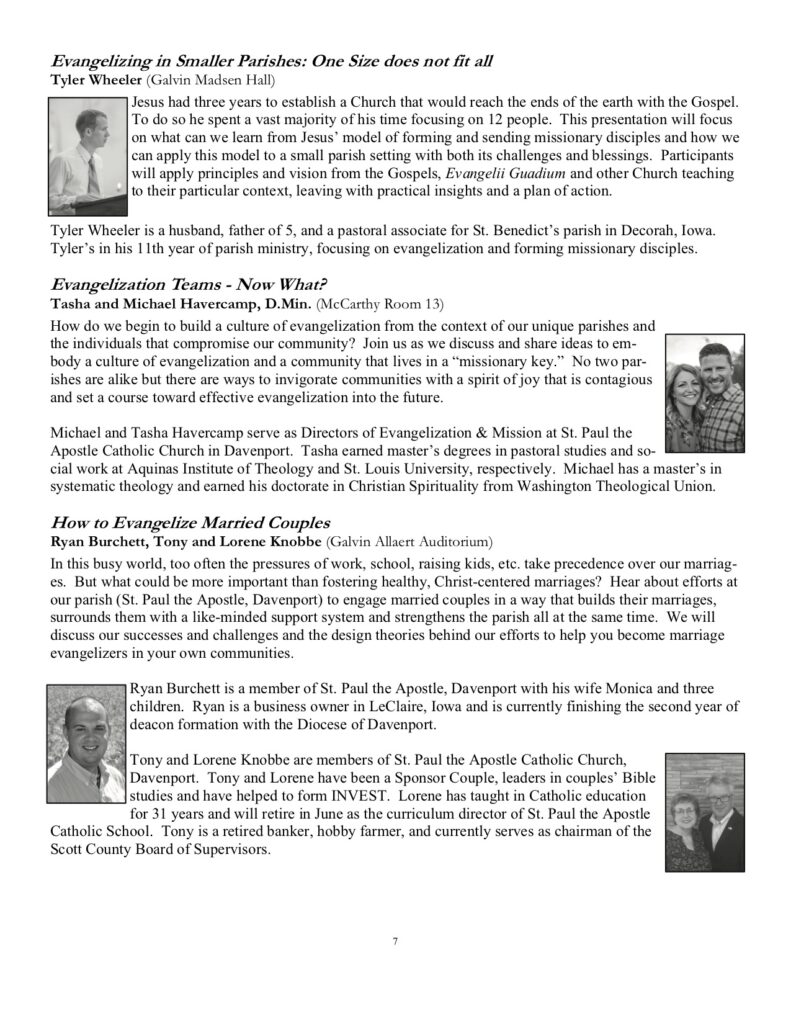 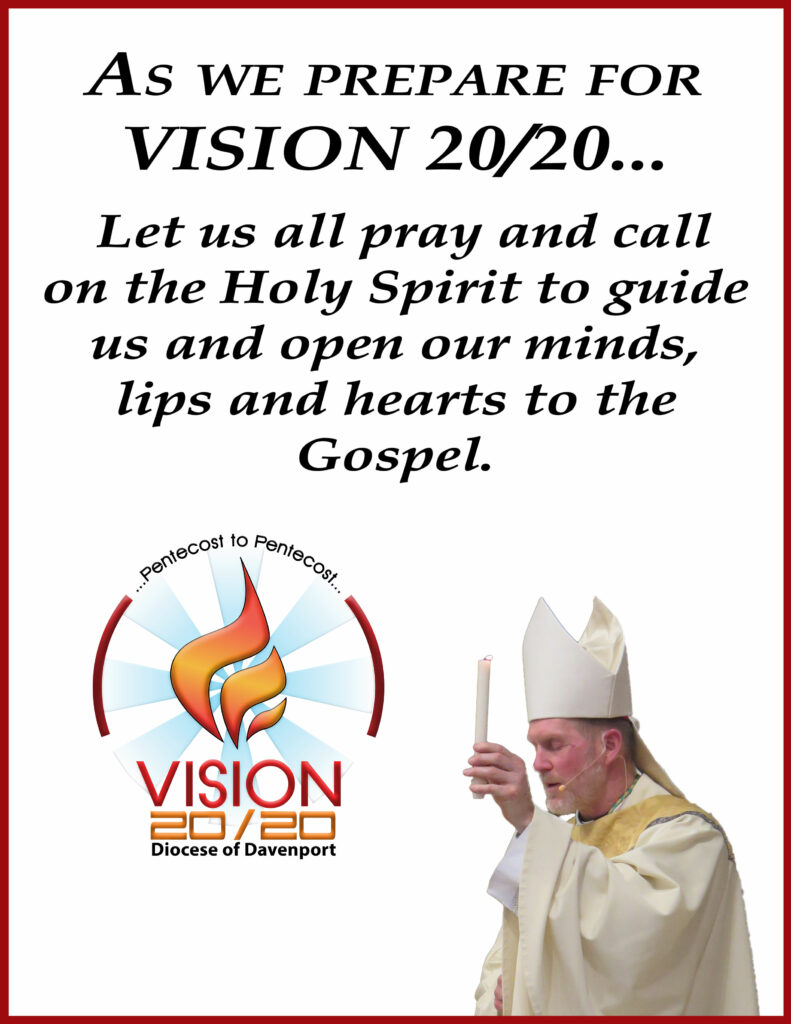 As you can see in the summary notes, my presentation will be offering an image of peace between faith and science, especially with our youth. The starting point of my presentation will be a recent pastoral experience that is not only fueling this upcoming presentation, but has made me take to prayer the possibility of writing an open letter to any science teacher who will read it.

One of the youth from Saint Olaf Parish, the parish I serve as Pastor, asked if I would be willing to be interviewed for a project in her middle school science class. The project was on how Christians view evolution. The teacher asked the middle school students to write a paper on the question, “Why does Christianity reject evolution?” As part of the project, the teacher asked the students to interview someone other than their parents to get their opinion on the matter.

The school has a very good reputation, as does the education culture in Eau Claire, Wisconsin as a whole. Many of the teachers and administrators at this school are some of the most dedicated and active parishioners at St. Olaf. Therefore, I see no need to “declare war” on this school or out the teacher by creating an emotionally driven caricature of them that would undoubtedly misrepresent and dehumanize them. It is a good school, with good teachers, and I have no reason to think that this project was given in any other spirit than as a means to get the students to think about faith and science.

Sadly, as those of you who follow my writing can guess, the very premise of the assignment reminds me of St. Thomas Aquinas’ famous quote, “An error in the beginning is an error indeed!” Are there Christian denominations that reject evolution? Absolutely! And for those denominations, this is a valid question to be asked and explored. However, to stereotype all Christians as rejecting evolution is a misrepresentation of the diverse tapestry that is Christianity.  Instead, it would have been far more fruitful for the teacher to ask:

“How do you understand evolution in light of the faith tradition you belong to? As part of your answer, interview someone from your Church/Synagogue/Temple/Mosque or place of worship who can give you an educated answer to this question. If you are not a part of a faith tradition, how do you view the question of religion and evolution?”

Why did I frame the question as I did? For one, the school I speak of is a public school. In my sixteen years of priesthood, I have seen two models emerge on how the separation of Church and state in United States is observed in public schools. One is that faith is not to be discussed in any way as part of classroom projects. The other is that faith can be mentioned, but must allow for the full expanse of faith traditions represented in the school to have a voice. My reworking of the project question obviously seeks to embrace approach two.

The second reason I re-framed the question as I did was to display the inadequacy of the original question. Some may argue from the outset that a faith question should never be asked in a science class whether it’s a public or private school. I think there is foundation, at least in a narrowly focused course, for such an approach. I don’t mind that faith questions are asked in a science class, but if they are, I beg any science teacher who is reading my blog post to take seriously my main point – Present a question of faith with the same level of clarity, intellectual integrity, and fidelity to the truth as you do your science lessons!

Sadly, as a priest who has been blessed with intentional ministry to middle school, high school, and university students, I see a growing trend of class projects on faith and science in education environments that are laced with false presumptions, grossly misrepresenting people of faith, and, unlike the situation I mentioned above that was presented respectfully, can be downright insulting to Christians.

At the university level, I have counseled students who have been called Monkey Haters (presuming they deny evolution from apes since they are Catholic), Flat Earthers, Woman Haters (used against those who oppose abortion on genetic grounds), and a plethora of other spiteful labels that do nothing but fuel hate. Now, I also need to share that I have counseled an equal number students (at times the same ones I referenced in the previous sentence) who have used, as Christians, derogatory, spiteful, and hateful misrepresentations of people who reject Christianity. This ministerial background leads me to two conclusions: 1. Anyone who thinks that a parish priest doesn’t know what parents go through might be rushing to a false presumption; and, 2. We all need to take a deep breath, step away from the emotional fire of cultural spitefulness, and let the healing flames of the Holy Spirit assist us to embrace a sober respect and intellectual honesty for questions of faith and science.

So, what answer did I give to my middle school student? As a Catholic Priest, I shared our belief on evolution based on Scripture and Tradition.

Scripture – Genesis 2:7 …then the LORD God formed the man out of the dust of the ground and blew into his nostrils the breath of life, and the man became a living being.

Point being – The notion that humans came from preexisting matter is not contrary to Scripture.

Tradition: Papal teachings on matters of evolution have clearly displayed not only an openness to the subject, but a call to embrace the best science of the day.

Pope Pius XII: ..the Teaching Authority of the Church does not forbid that, in conformity with the present state of human sciences and sacred theology, research and discussions, on the part of men experienced in both fields, take place with regard to the doctrine of evolution, in as far as it inquires into the origin of the human body as coming from pre-existent and living matter—for the Catholic faith obliges us to hold that souls are immediately created by God. (Humani Generis. 36)

Saint John Paul II: Today, more than a half-century after the appearance of that encyclical, some new findings lead us toward the recognition of evolution as more than an hypothesis.
In fact it is remarkable that this theory has had progressively greater influence on the spirit of researchers, following a series of discoveries in different scholarly disciplines. The convergence in the results of these independent studies—which was neither planned nor sought—constitutes in itself a significant argument in favor of the theory. (Message to the Pontifical Academy of Sciences: On Evolution. 4)

Pope Benedict XVI: Currently, I see in Germany, but also in the United States, a somewhat fierce debate raging between so-called “creationism” and evolutionism, presented as though they were mutually exclusive alternatives: those who believe in the Creator would not be able to conceive of evolution, and those who instead support evolution would have to exclude God. This antithesis is absurd because, on the one hand, there are so many scientific proofs in favour of evolution which appears to be a reality we can see and which enriches our knowledge of life and being as such.(Question and Answer with Clergy on July 24, 2007. Response to Question 6)

Pope Francis: When we read the account of Creation in Genesis we risk imagining that God was a magician, complete with an all powerful magic wand. But that was not so. He created beings and he let them develop according to the internal laws with which He endowed each one, that they might develop, and reach their fullness. He gave autonomy to the beings of the universe at the same time in which He assured them of his continual presence, giving life to every reality. And thus Creation has been progressing for centuries and centuries, millennia and millennia, until becoming as we know it today, precisely because God is not a demiurge or a magician, but the Creator who gives life to all beings. The beginning of the world was not a work of chaos that owes its origin to another, but derives directly from a supreme Principle who creates out of love. The Big Bang theory, which is proposed today as the origin of the world, does not contradict the intervention of a divine creator but depends on it. Evolution in nature does not conflict with the notion of Creation, because evolution presupposes the creation of beings who evolve. (Address to the pontifical Academy of Sciences. October 27, 2014)

Intellectual overkill for a middle school thought project? Absolutely! Speaking as a former teacher, kids know how to feel – let’s teach them how to use the gray matter between their ears a little more!

There is more that I could say, but, for now, these are the initial musings I’m playing with for my presentation in Davenport. What are your thoughts? Share your reflections below. Who knows? I might just quote you in Davenport, Iowa later this week!