I wanted to become a theologian; for a long time I was restless:  Now, however, observe how through my effort God is being celebrated through astronomy.

—Johannes Kepler in a letter to his former teacher.

Will the mysterious shadow planet Nibiru obliterate Earth in October?

—from a Washington Post “Morning Mix” headline, January 5, 2017.
The question was answered with “No”.

You might not think that Johannes Kepler, one of the most influential astronomers in history, and “Nibiru”, the supposed Earth-destroying planet, would share any point of connection.  But they do.

Nibiru is a supposed planet that purportedly passes through the solar system periodically, wreaking havoc of one sort or another.  There are various versions of the Nibiru idea.  If you Google Nibiru (something I do not recommend, unless you have a great tolerance for the worst in internet misinformation) you will find there are many Nibiru enthusiasts, but they are not all in agreement on what is supposed to happen.  But the general idea is that Nibiru is on some sort of orbit that brings it into the inner solar system every 3,600 years or so.

It is unclear how many Nibiru enthusiasts believe it actually exists, and how many are just fascinated by the idea.  I first learned about it from a neighbor—a very intelligent musician, director of music at one of the more prominent Catholic churches in my area (Louisville, Kentucky), who holds a doctorate from one of the best music schools in the USA.  It is not that he truly believes in Nibiru, but he clearly finds the idea fascinating, and always asks me about it (in part to provoke an eye roll).  But the fact is, he does not have a scientific education; he seems to feel that he is stuck with either believing or not believing what scientific authority tells him on the subject, and so he likes to play up the conspiracy theory aspect of it (“why are all these people going to the South Pole, huh?  They’re tracking Nibiru, aren’t they?”).  One of the janitors at my college is a little more serious in his inquiries.  He just wants to know.  “I hear about this stuff, but I have a grade-school education,” he said.  “How do I know what to believe and what not to believe?”

How indeed.  The answer to that brings us to Johannes Kepler.

As discussed in the last post, Kepler was convinced that God designed a mathematical universe, and that in studying the universe he was discovering God’s design.  One of the universe-governing mathematical rules that Kepler discovered was what we now call Kepler’s Third Law of Planetary Motion.  This rule says that when one body orbits another, the time required to complete one orbit (that is, the period of the orbit) is related to the distance between the two bodies.  The relationship is this: the period squared is proportional to the distance cubed.

At first glance, we see that a smaller distance means a shorter period.  This sort of makes sense.  The gravitational pull of the sun is stronger at closer distances.  If we think of an orbit as a balance between, on one hand, the sun’s gravity that would pull the planet toward the sun, and, on the other hand, the planet’s momentum that would cause it to fly off in a straight line, then a planet closer to the sun necessarily will have more speed so as to have the momentum required to balance the stronger solar gravity.  Also, being closer to the sun, the circumference of its orbit is smaller.  So, with more speed, and a smaller orbit, the period will be shorter.  But as Kepler discovered, there is more to all this than just “closer means shorter period”.

Let’s take each period value from the table above and square it:

Now let’s take each distance value and cube it:

These values are plotted in the graph below.  Note the nice, straight line that results.  This is Kepler’s Third Law, in visual form. 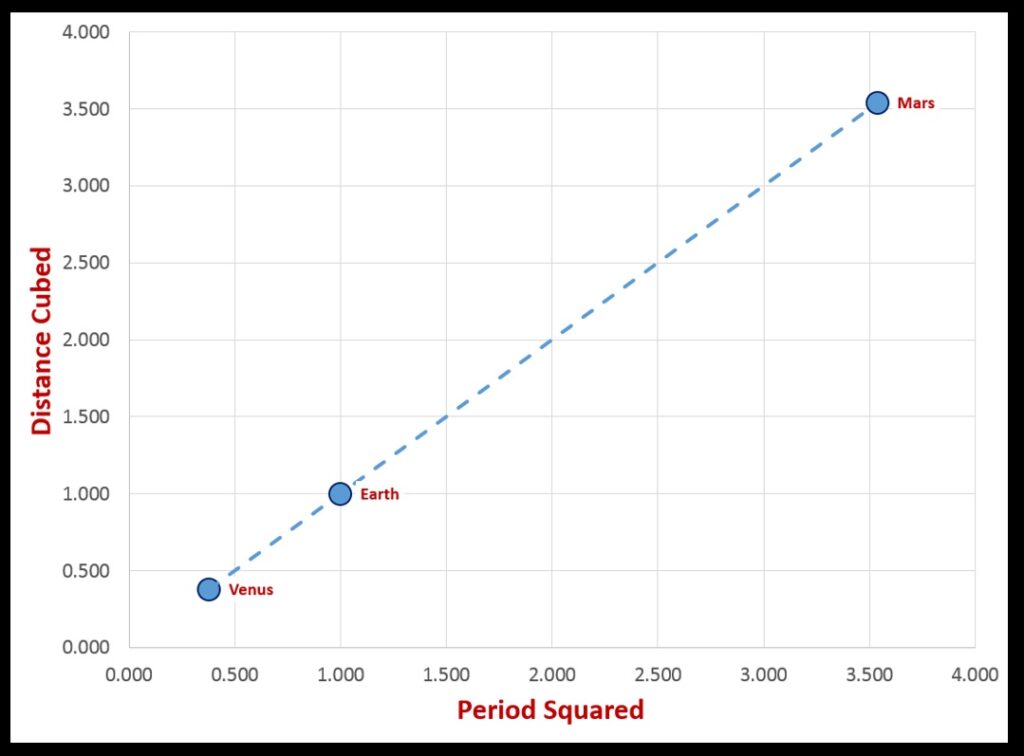 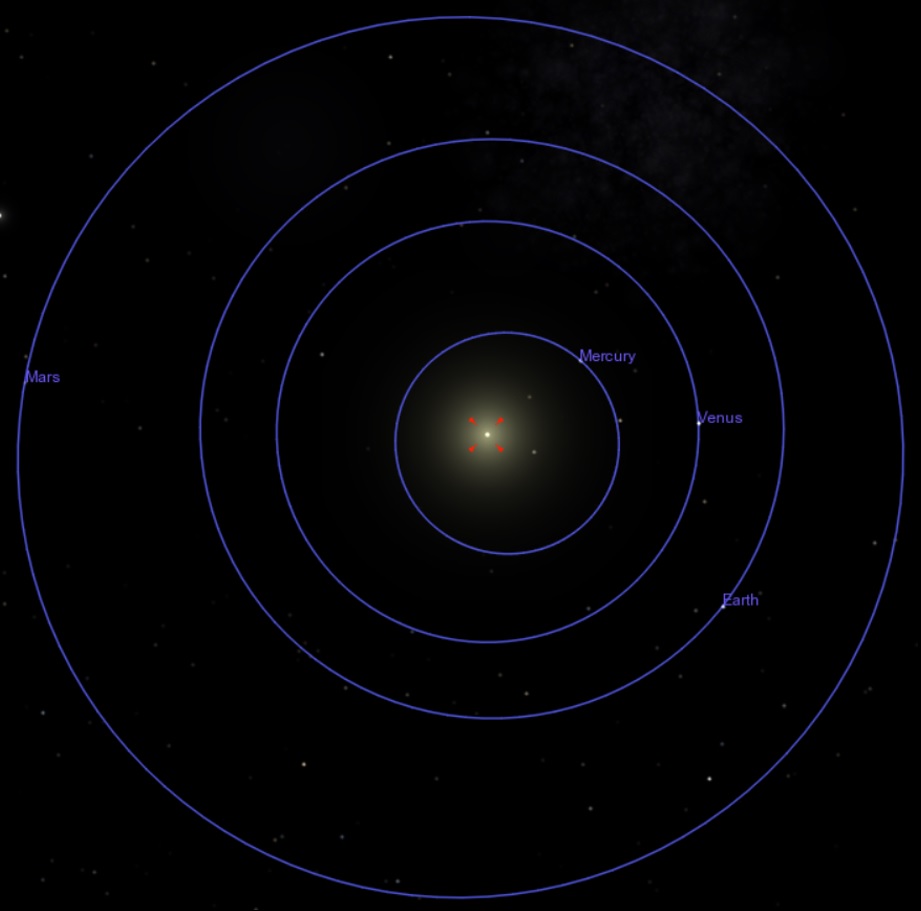 Planetary orbits (out through Mars) around the sun.  Kepler’s Third Law says that there is a precise mathematical relationship between the time required for a planet to orbit the sun (that is, the period) and the distance from the planet to the sun.  The orbits themselves have a mathematical shape—the shape of an ‘ellipse’ (a circle is a special case of an ellipse).  The sun is located at a mathematically defined point in the ellipse called a ‘focus’.

The law that Kepler discovered in fact holds true for any orbit, and not just for orbits around the sun.  Here is the same information, the same sort of plot, and the layout for Jupiter’s larger moons: 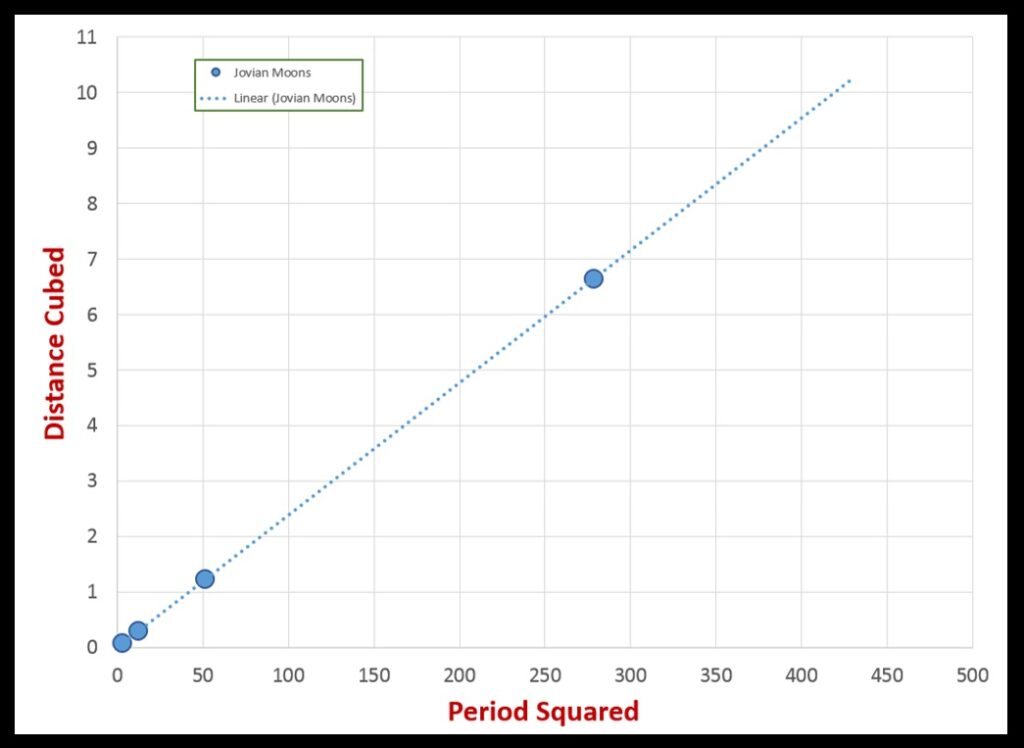 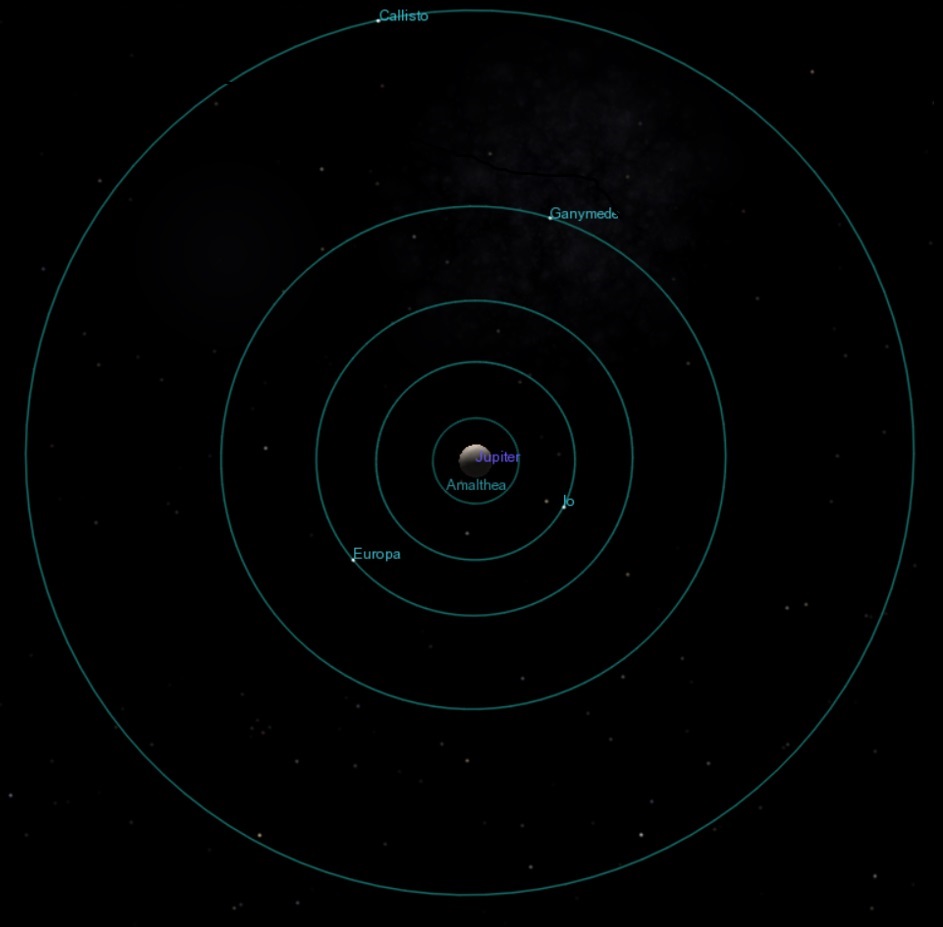 The orbits of Jupiter’s larger moons. Kepler’s Third Law and the elliptical shape rule both hold for the Jovian system, too.

Now, here’s the same for some of Saturn’s moons—and I’ll put them on the same plot as the Jovian system: 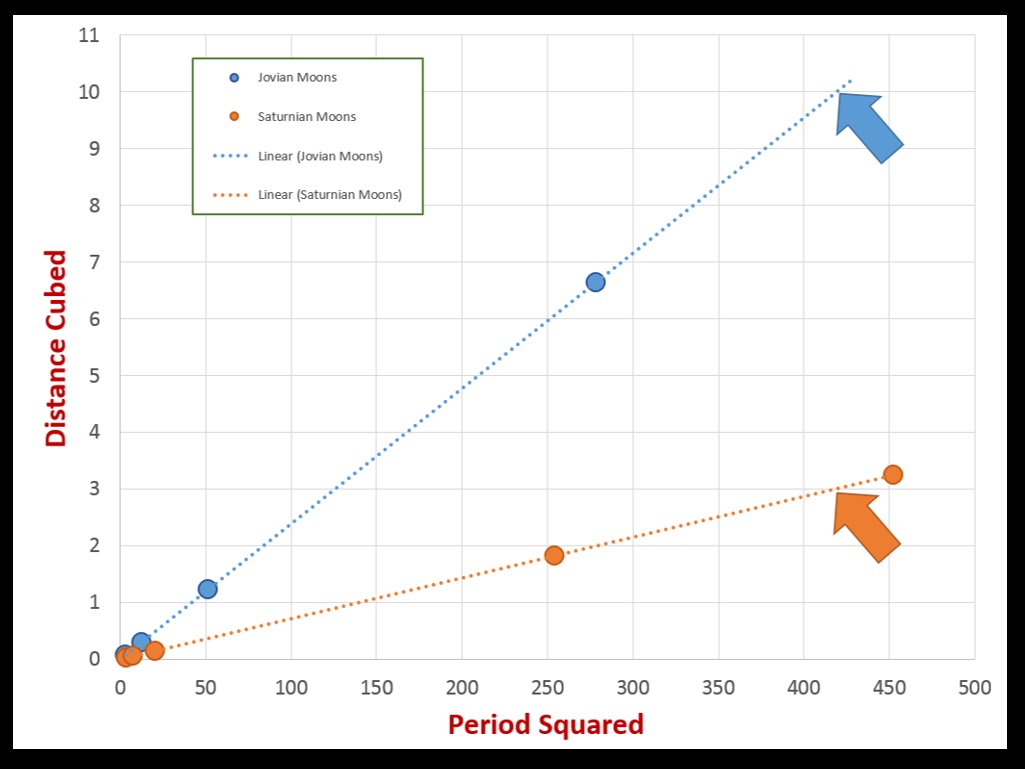 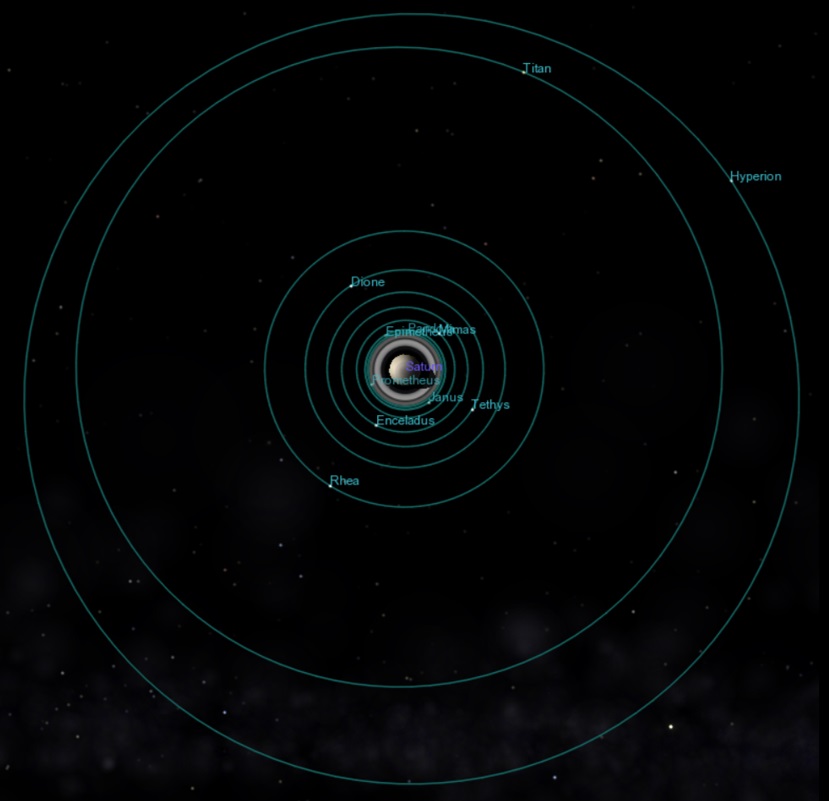 The orbits of some of Saturn’s moons.  Again Kepler’s Third Law and the elliptical shape rule both hold.

It turns out that the mass of the body being orbited affects the graph.  Note the arrows in the graph.  Note where the “Distance Cubed” value is 10 for the Jovian moons.  See how, at that Period, it is only 3 for the Saturnian moons?  This tells us that the mass of Saturn is only 3/10 or 30% of the mass of Jupiter.*  Saturn’s moon Hyperion takes more days to orbit Saturn than Jupiter’s Ganymede takes to orbit Jupiter, even though Hyperion is closer to Saturn than Ganymede is to Jupiter.  Jupiter’s larger mass and stronger gravity are behind this.

The movements of the heavens are nothing except a certain everlasting polyphony (intelligible, not audible)… which marks out and distinguishes the immensity of time with those notes.

“Marks out time”—like clockwork.  You don’t get clockwork if a wrecking ball comes plowing through every once in a while.

“But wait!” you may be saying.  “Didn’t an asteroid impact wipe out the dinosaurs?  Didn’t a comet hit Jupiter?  Are there not impact craters on the moon?”

Yes.  We think an asteroid wiped out the dinosaurs.  We saw a comet hit Jupiter in the 1990’s.  There are impact craters on the moon.  But our understanding that such things occur is fairly recent, whereas Kepler worked out the mathematics of orbits four centuries ago.  The harmony of the universe is what astronomers first noticed, because it is what stands out.

In fact, for a very long time we astronomers thought the universe ran exactly like clockwork.  Our units of time-keeping—days, months, years—are based on the cycles of the sun, moon, and stars.  They are based on those cycles for the very reason that the universe we generally see does in fact run like clockwork, and for most of human history the universe we could observe was far more regular and unchanging than any clock we could build.  The universe appears so unchanging that, for a very, very long time, we astronomers thought the celestial objects like the moon, sun, planets, and stars were made of an unchanging material called the Fifth Element (as opposed to four changeable elements found on Earth).  After all, the stars, planets, and constellations that you can see with your own two eyes today are the very same ones you could see thousands of years ago—the very same ones described in some detail in a 2300-year-old poem called The Phenomena by the ancient Greek poet Aratus: 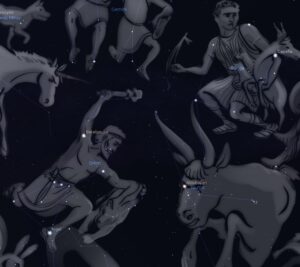 The constellations described in the portion of Aratus’s poem quoted here. The Pleiades are visible in the center of the Bull.

Beneath Auriga, turning to the east,
The Tyrian Bull, Europa’s treacherous beast,
His golden horns and snowy neck displays:
Rivals his splendid head Apollo’s rays.
Glows his red eye with Aldebaran’s fire—
With sparkling gems his brow the Hyads tire.
Auriga and the Bull together meet—
Touches his star-tipp’d horn the hero’s feet.
The beast before him to the west descends—
Together with him from the east ascends….
[Behind the Bull] the Pleiads next are roll’d,
Like seven pure brilliants set in ring of gold.
Though each one small, their splendour all combine
To form one gem, and gloriously they shine.
Their number seven, though some men fondly say,
And Poets feign, that one has pass’d away.
Alcyone—Celoeno—Merope—
Electra—Taygeta—and Sterope—
With Maia—honour’d sisterhood—by Jove
To rule the seasons plac’d in heaven above.
Men mark them, rising with the solar ray,
The harbingers of summer’s brighter day—
Men mark them, rising with Sol’s setting light,
Forerunners of the winter’s gloomy night.
They guide the ploughman to the mellow land—
The sower casts his seed at their command….
Athwart the Bull first rise—majestic sight!
Orion’s giant limbs and shoulders bright.
Who but admires him stalking through the sky,
With diamond-studded belt, and glittering thigh? 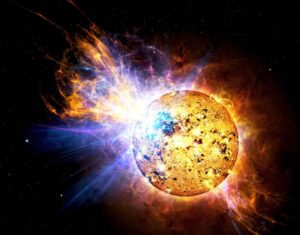 This is so cool! And much less boring than mathematics and Kepler’s Laws of Planetary Motion.

We astronomers might have to accept some blame for nonsense like Nibiru.  We want to tell people about exciting, dynamic stuff—stars being born! stars dying! worlds and galaxies in collision! change! chaos! excitement! THINGS BLOWING UP!!!  Science should be fun, right?  Thus fun, exciting things get lots of emphasis in popular science.  After all, are not thousands upon thousands of years of orbital stability the very definition of boring?  And how boring are Kepler’s Third Law graphs?  How boring is lack of change?  How boring is reading some ancient Greek poet describing the very sky we see today?  Perhaps it is at our own peril that we astronomers talk up the exciting stuff, and gloss over Kepler and stability and clockwork.  And, of course, what is a media outlet like the Washington Post going to be more likely to talk about?  Mysterious planets obliterating things?  Or math and graphs and hymn-singing seventeenth-century astronomers?

Perhaps Nibiru is the logical product of imaginations fertilized by too much emphasis on not being boring.  But it is absolutely the product of imagination.  These harmonious systems with their nice, roundish orbits illustrate quite clearly that there is no cosmic wrecking ball sailing through them.  It would be as reasonable to assert that some evil wizard like Voldemort is going to obliterate Earth in October 2017 (or at any other time) as it is to assert that some planet called Nibiru will.  Johannes Kepler could have told you this—four hundred years ago.

*You could add to this plot the system of any planet that has moons, and use the result to determine the planet’s mass.