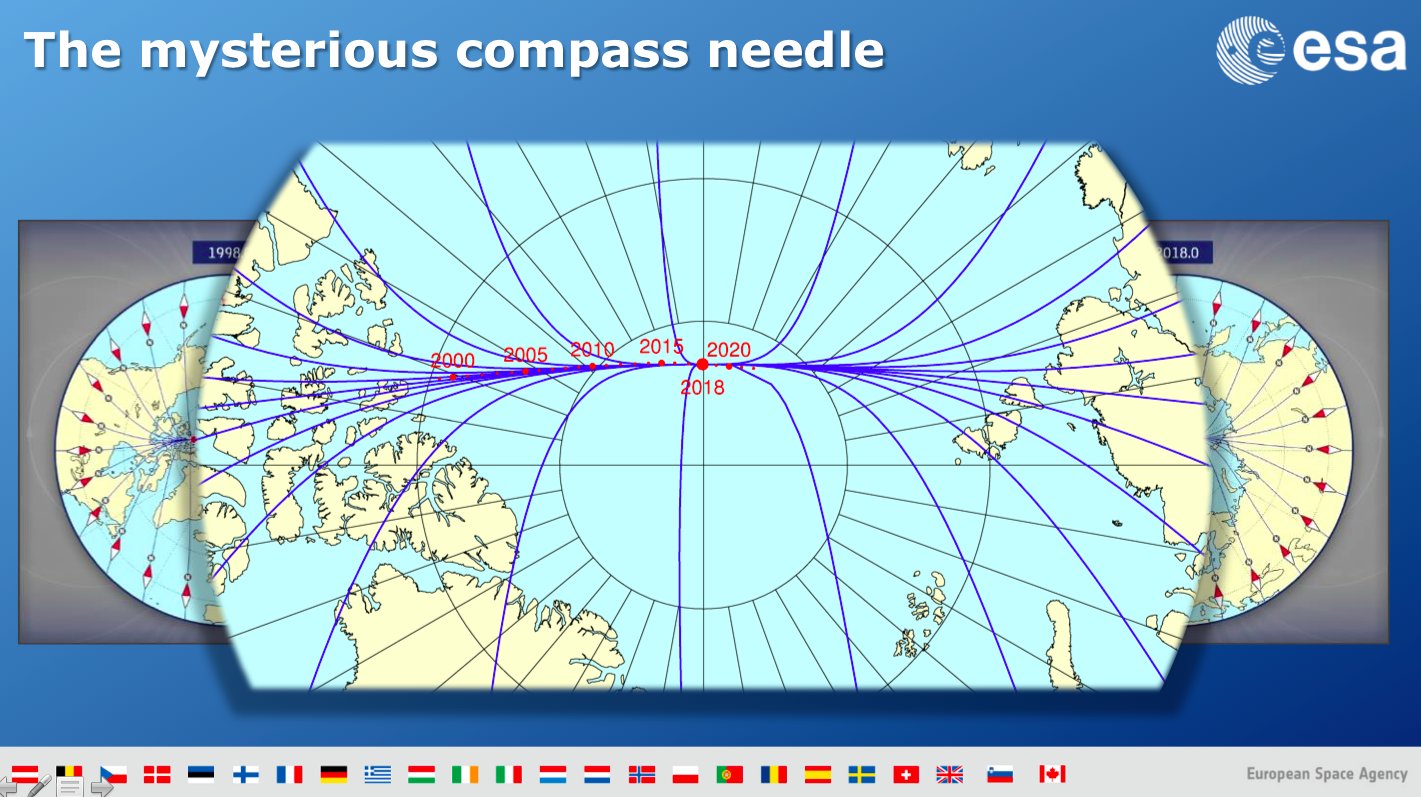 Most people know that the magnetic north pole is not at the geographic north pole. It’s drifting away from Canada towards Russia at a rate of 55km/yr. BUT, this year, the magnetic pole is closest to the geo pole. A separation of just 390km. @ESA_EO #Swarm #EGU18 pic.twitter.com/lxM1PXW1Jf

I didn’t recognize the hash-tags at the end of Jonathan’s tweet, so I looked them up – which sent me down an hour-long rabbit hole:

@ESA_EO refers to the ESA EarthObservation twitter account. They seem to be doing a lot of education and outreach… I followed them.

#EGU18 refers to the European Geosciences Union General Assembly 2018 being held in Vienna Austria April 8-13, 2018. There are a LOT of interesting tweets coming from this conference – I wish I was there. 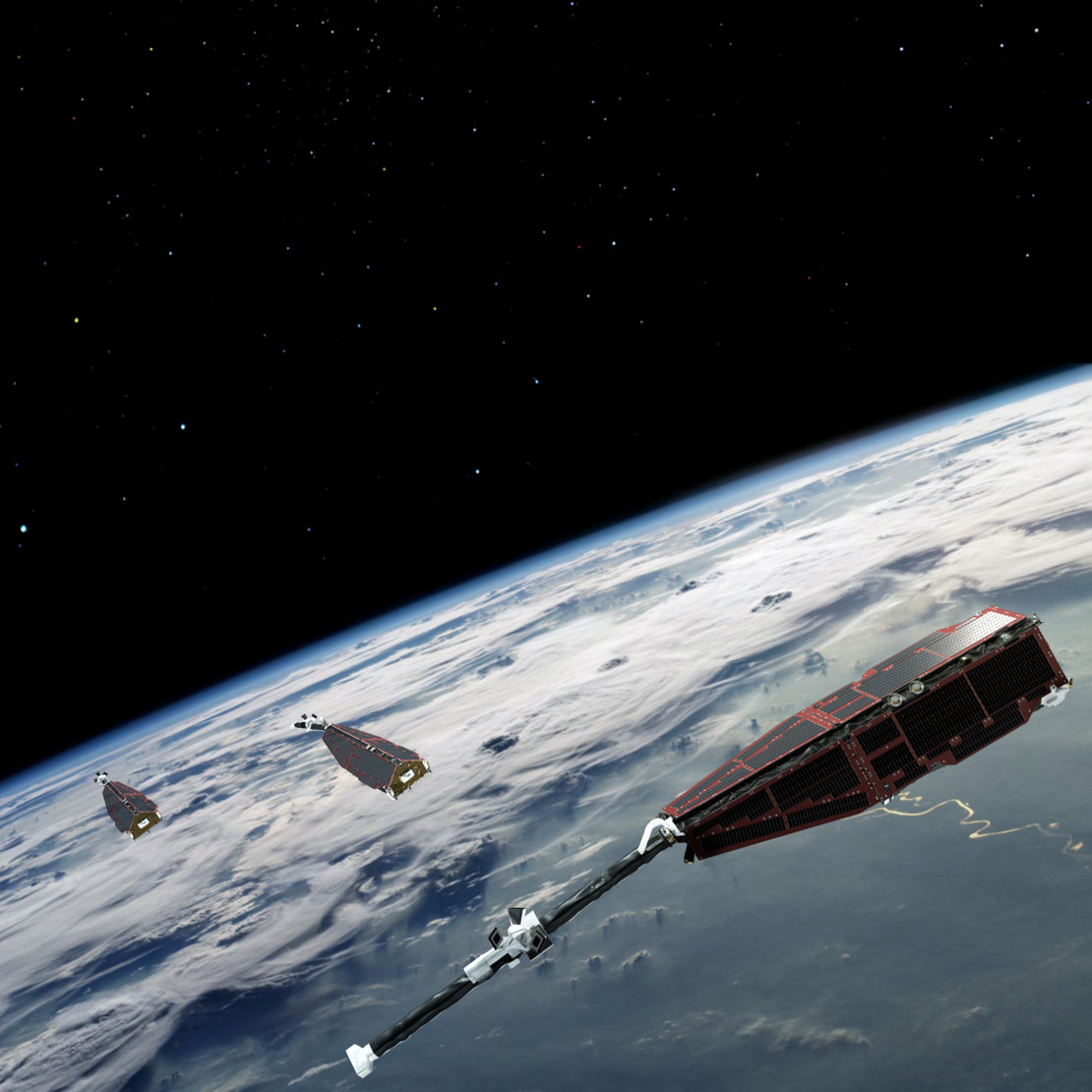 Swarm is ESA’s first Earth observation constellation of satellites. The three identical satellites are launched together on one rocket. Two satellites orbit almost side-by-side at the same altitude – initially at about 460 km, descending to around 300 km over the lifetime of the mission. The third satellite is in a higher orbit of 530 km and at a slightly different inclination. The satellites’ orbits drift, resulting in the upper satellite crossing the path of the lower two at an angle of 90° in the third year of operations. The different orbits along with satellites’ various instruments optimise the sampling in space and time, distinguishing between the effects of different sources and strengths of magnetism. Credit: ESA/AOES Medialab

This is the most detailed map ever of the tiny magnetic signals generated by Earth’s lithosphere. The map, which is being used to understand more about Earth’s geological history, is thanks to four years’ of measurements from ESA’s trio of Swarm satellites, historical data from the German CHAMP satellite and observations from ships and aircraft.

Erwan Thebault from the University of Nantes in France said, “This is the highest resolution model of the lithospheric magnetic field ever produced.

“With a scale of 250 km, we can see structures in the crust like never before. And, we have gained even finer detail in some parts of the crust, such as beneath Australia, where measurements from aircraft have mapped at resolution of 50 km.

“This combined use of satellite and near-surface measurements gives us a new understanding of the crust beneath our feet, and will be of enormous value to science.”

Most of Earth’s magnetic field is generated deep within the outer core by an ocean of superheated, swirling liquid iron, but there are also much weaker sources of magnetism. The Swarm constellation has been used to yield some discoveries about these more elusive signals, such as that from Earth’s lithosphere. A small fraction of the magnetic field comes from magnetised rocks in the upper lithosphere, which includes Earth’s rigid crust and upper mantle. This lithospheric magnetic field is very weak and therefore difficult to detect from space. As new oceanic crust is created through volcanic activity, iron-rich minerals in the upwelling magma are oriented to magnetic north at the time and solidified as the magma cools. Since magnetic poles flip back and forth over time, the solidified magma due to mantle upwelling at mid-oceanic ridges forms magnetic ‘stripes’ on the seafloor which provide a record of Earth’s magnetic history. These magnetic imprints on the ocean floor can be used as a sort of time machine, allowing past field changes to be reconstructed and showing the movement of tectonic plates from hundreds of million years ago until the present day.”