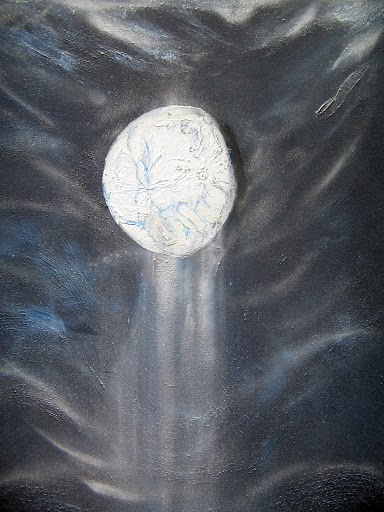 A painting of Enceladus with its exploding ocean. By Deirdre Kelleghan – Acrylic, pastels on canvas 20X30 inches

Last night I joined a zoom lecture hosted by the Science and Entertainment Exchange. The speaker was Kevin Peter Hand who is an astrobiologist. His talk was about Alien Oceans of Earth and Beyond. I have enjoyed several  educational online presentations in recent weeks, some on the subjet of astrobiology. It can be very stimulating to have something to lift one’s spirits during this difficult time.

I have had a thing about Enceladus for years now.  I once made a model of this icy moon out of a football, paint and some clay. So kids could hold it when you could not go to a shop and buy such a thing. A few years later I painted Enceladus  inspired by Cassini’s images. It is a very textured painting as was the model made from a football. Several of my workshops include Enceladus and it has been drawn many times by children attending over the past years. So I  just had to pay attention to what he had to say.

He reminded the audience that Enceladus has organics in its exploding plumes. As well as salt and hydrogen emanating from its deep interior ocean.Last night I was particularly intrigued by Kevin Hands experience in the field of exploring Earths poles for life under the ice. He spoke about the use of the latest technology in Earth science.

This research will directly feed its developments into future space robots. One of these is called BRUIE, a two-wheeled robot explorer. This actually moves around directly under the ice checking for life as it goes along.

Some sort of buoyancy system keeps it attached to the ice as it moves under it. This JPL robot or something similar is targeted to explore icy moons in our solar system in the future. Here is an article about this fascinating technology.

The entire talk brought me back a few years to when I did an online course in Astrobiology. It was with the University of Edinburgh with Coursera. Professor Charles Cockell gave that course and I looked forward to it every week. It was an interesting mix of science, biology and solar system exploration with the story of life blended in so neatly. Astrobiology and the search for Extraterrestrial Life

Recently I have rediscovered Professor Cockell online. He is producing a talk a week on YouTube. All astrobiology related all obviously recorded in his home. They are short, all with interesting titles and thought-provoking. The style is a fireside chat, just him talking and you listening.

Here is the link to all of them all, he calls it a pandemic series. The first one is called Are Viruses Alive and it is at the end of the page. It looks like he is up to video 42 this week but within this page listing, you will see all the video titles so one might take your interest.

As far as I know, the Science Entertainment and Exchange people put their videos up later for all to see them. So I hope some of this is of interest to you. We all need some stimulation and enjoyment during this pandemic.

The recording for Alien Oceans on Earth and Beyond will be here soon!  check in to see if it is up yet