Click here for other posts about “Google Doodle Scientists”.

Did you use Google yesterday?  If you did, you probably saw the “Google Doodle” in honor of Elena Cornaro Piscopia.  Piscopia was the first woman to receive a doctoral degree (PhD) from a university (the University of Padua in Italy, in 1678).  And, she is yet another Google Doodle scientist who was a person of faith.

With a little digging (not an exhaustive search by any means) I found the following articles that seem to provide some details about Piscopia for a broad audience:

Various sources report that Piscopia was an oblate of the Benedictine order.  She wanted to join the order as a nun, but her father objected (she is featured on the web page of the International Benedictine Oblates).  Over one hundred years ago a Benedictine abbess found her neglected tomb, took an interest in her story, and generally brought Piscopia back into the public view.

Various news sources reporting on the Piscopia Google Doodle state that “the Roman Catholic Church” would not allow her to receive a doctorate in theology because she was a woman.

From the web page of The Independent in the UK (arrow added).

Apparently the local cardinal would not allow the theology degree because that would qualify her to teach theology and that was not acceptable.  However, he was OK with a philosophy degree.  That cardinal might not be “the Roman Catholic Church”, but fair enough.  However, what might be overlooked here is the fact that a lot of people would not allow a lot of things in Piscopia’s case.  The government would not allow her to be recognized as her father’s legitimate child, because he was a rich man who had apparently fallen in love with, and definitely had many children by, someone who was very poor (eventually he married her mother and had their children “made legitimate” by paying out a lot of money to the government of Venice).  Piscopia was educated through private tutoring because no one allowed women to go to school.  Her father would not allow her be a nun.  And what she really wanted to do was serve the poor.

This makes her accomplishments—ending up knowing seven languages and being well-versed in geometry, astronomy, and medicine, with the first doctorate ever awarded to a woman—and still serving the poor—all that more remarkable.  It seems that in the end, she won everyone over and became a celebrated figure, this devout woman who did so many things that she really wasn’t supposed to be allowed to do. 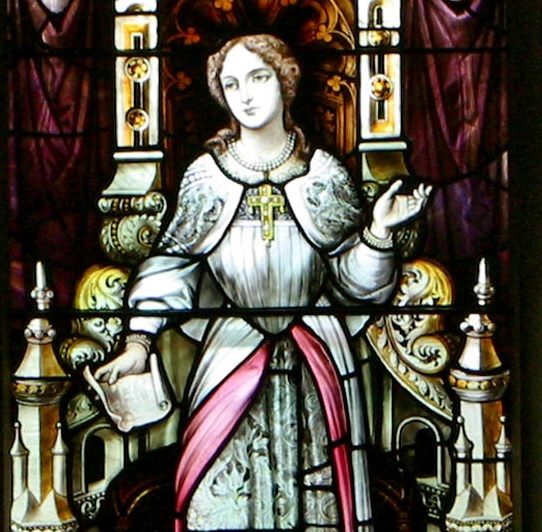 Piscopia as portrayed in the Vassar College library.