We spent Tuesday, the 14th of July, in suspense, not knowing whether the Pluto flyby had been a success. Just as planned, the spacecraft had not transmitted any signal since Monday.  I was among the visitors at the home base of the New Horizons spacecraft, the Johns Hopkins University’s Applied Physics Laboratory (APL) in Laurel, Maryland. Late in the afternoon, the spacecraft antenna pointed briefly back at Earth. The plan was to send a squirt of status data for a few minutes.

Moving at the speed of light, this signal would not reach Earth until four and a half hours later, at 8:52 PM Laurel time. Around 8:00, the conference center was filling up with people. The crowd watched a NASA TV feed. Had the spacecraft functioned correctly?

The feed switched to the New Horizons operations center in another building. “Carrier lock” had been achieved. This brought relieved applause!

Bowman made a formal report to the Principal Investigator: “PI, MOM on Pluto One, we have a healthy spacecraft. We’ve recorded data of the Pluto system. And we’re outbound from Pluto.”

Transmission of the scientific data would have to wait. New Horizons had resumed its busy series of measurements, requiring frequent changes in its orientation so as to point instruments at various targets. The high-gain antenna dish would not point toward Earth again for several hours. 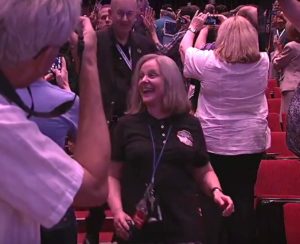 Time for another media briefing in the auditorium. Black-shirted New Horizons team members, having walked over en masse from Building 200, were cheered like champion athletes. As they descended the steps in the aisles and assembled on the stage, visitors cheered, journalists grinned, and NASA’s Public Affairs Officer Dwayne Brown did his best to emulate a sports announcer, mustering superlatives. It took a while to settle down. 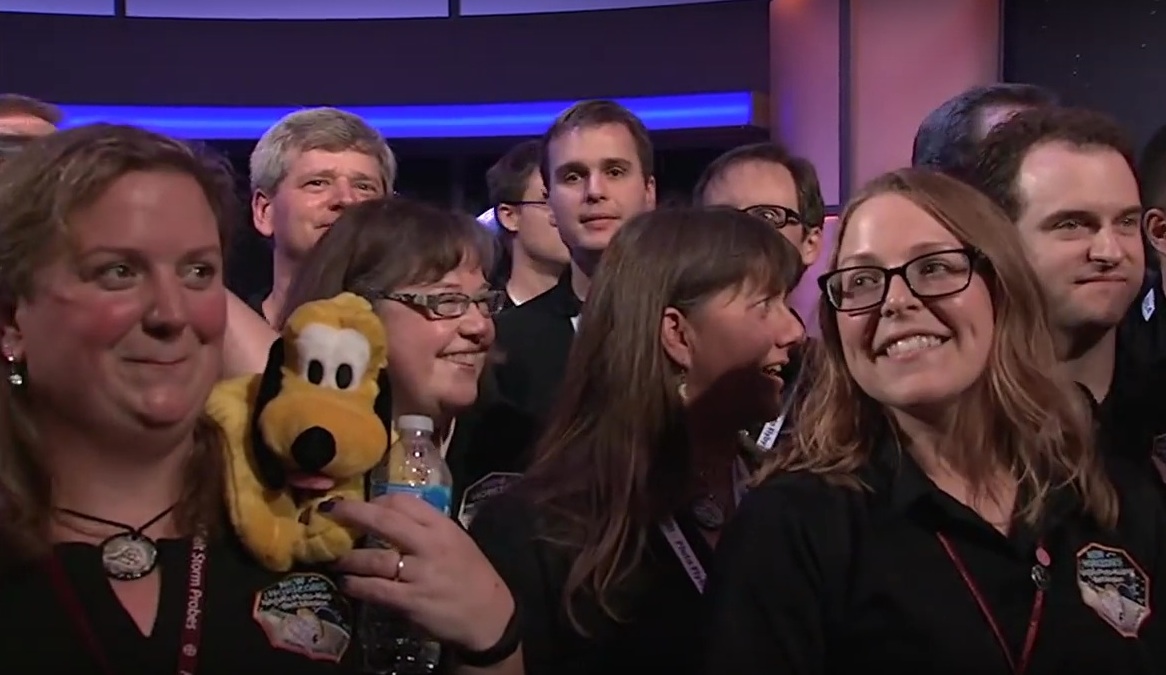 New Horizons team members, wearing black shirts sporting the mission logo, on stage to celebrate successful contact with the spacecraft after its closest approach to Pluto and Charon. Photo: NASA.

A panel of team leaders told what had been learned. “We didn’t have any ‘autonomy rule firings,’ and what that means in layman’s terms,” said Alice Bowman, “is that the spacecraft—was happy.” The crowd laughed.

She continued, “And it was very happy to go on and collect more science. And the main computer system has the data recorder and our C&DH [Command and Data Handling] engineer had reported that ‘the expected number of segments’ on that recorder had been used. So that tells us that that data has been collected on the spacecraft.” Which was another reason for applause. 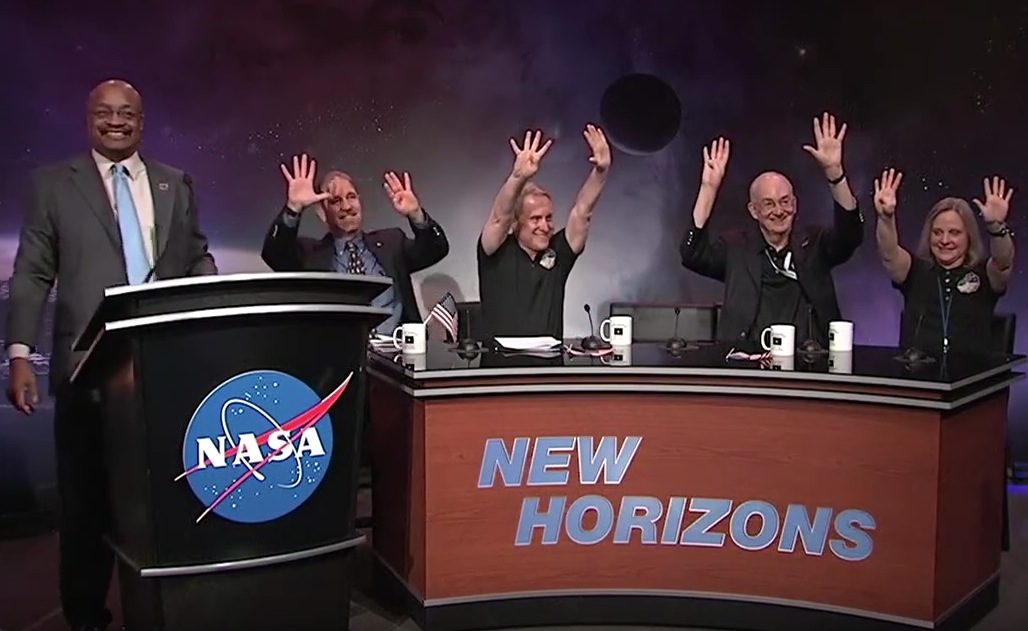 At the end of the briefing, the panelists gave to the cameras what I had learned was the special New Horizons salute: Holding up nine fingers.

Nine is an important number to these people. There are those who say that the Solar System has only eight planets. Nobody in Laurel, Maryland that week would mention the eight-planet idea, except to ridicule it. To them, Pluto was a long-sought goal, and after decades of work, it had blossomed into a complex world with intriguing landscapes and a flock of moons. As far as they’re concerned, Pluto is a planet.

As it receded from Pluto and Charon, of course, New Horizons was still observing, still writing fresh data into its recorders. For us on Earth, Encounter Day was ending.