As I left the Applied Physics Laboratory on the evening of Monday, 13 July—a day I wrote about in “Land of the Plutophiles“—I knew the New Horizons spacecraft would fall silent that night.

Across the gulf between here and Pluto, the slow transmission of images and other data takes a lot of time. Pointing instruments this way and that, as the spacecraft covered Pluto, Charon, the smaller moons, and the space between, left no time to pause and point the high-gain dish antenna at Earth—especially during the crucial hours near closest approach. Instead the plan was to record all data in New Horizons’ onboard memory. There would be plenty of time, if all went well, to transmit the data in the months following the flyby.

During Monday, nevertheless, a few key “insurance” observations had been transmitted. The chance of collision with a destructive grain of dust, or disruption by a cosmic ray, was remote, but not zero. In case of failure during or just after the flyby, we’d have a few precious pictures and spectra to tell us something about Pluto and its neighborhood.

I dressed for the occasion. I’d brought my skinny Sixties tie, a gift from a friend who huaunts thrift stores. On it a tiny embroidered Mercury capsule orbits a pale silver planet. I wore a suit and a shirt that I hoped would do the tie justice. Because if you don’t wear your vintage space tie on a day when history is being made, when else are you going to wear your vintage space tie? 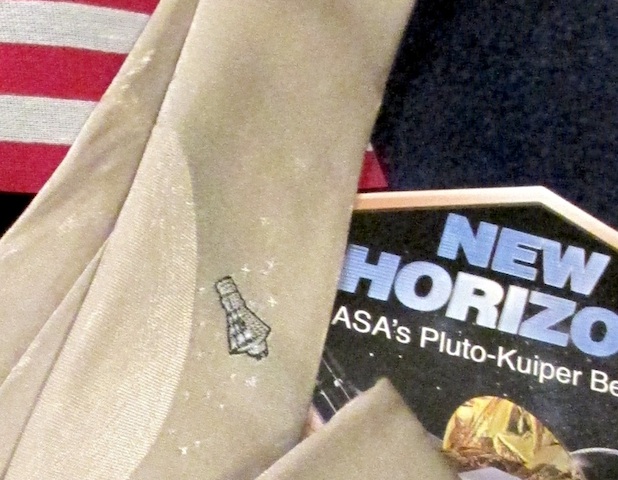 I arrived at APL just after 7. Small American flags were passed out. It seemed a bit odd to gather people for the instant of closest approach, 7:50 AM. In one sense, nothing was about to happen. There would be no signal from the spacecraft for many hours. We would have no way to know this morning what was happening in Pluto’s vicinity.

From another point of view, the moment was potent. The 14th of July was the day the people of the New Horizons project had been anticipating for more than a decade. Nine and a half years since launch; more years since the task of building New Horizons began; over 25 years of dreaming and planning and proposing. Celebrate the precise second when the spacecraft passed nearest to Pluto? Why not?

I think of this mission as a triumph of humankind, a dash to distant worlds that would, if successful, make global history. The flag in my hand, though, was a reminder that the government of one nation had sponsored, built, and launched New Horizons, albeit with many international collaborators. For the people of the United States to take pride in this accomplishment seemed entirely appropriate.

The conference center was jam-packed with APL employees, and visitors. Alan Stern, the Principal Investigator, assembled members of the New Horizons team at the center of the room. Above their heads, video screens displayed the NASA TV feed.  At one point, we saw the Mission Operations Center in another building, deserted except for stuffed toys left in the flight controllers’ seats. The flight controllers were here with us… 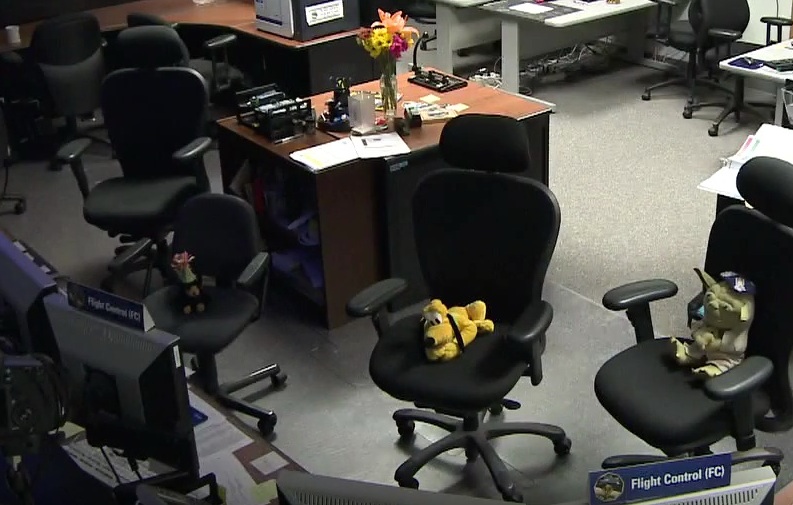 In the Mission Operations Center, deserted by humans, Pluto, Yoda, and a bear in a party hat monitor the Flight Control stations. Photo: NASA.

As the moment drew near. Stern led the crowd in a countdown. We cheered. We waved our little flags. We didn’t know whether the spacecraft had functioned properly, but we were sure it had passed Pluto, and was now receding into deep space. Newton’s laws of motion assured us of that.

Shortly afterward, the morning’s media briefing began. On a screen was spectacular “insurance” image, gathered on Monday, that would become iconic: The sunlit hemisphere of Pluto, in detail. The surface was far from uniform: Rugged terrain in the dark belt around the equator. Cliffs, perhaps signs of erosion, running across the northern hemisphere. Smooth plains in the vast, pale heart-shaped region. Craters were few, suggesting that the surface has changed in geologically-recent time. Imaging scientists had worked far into the night to prepare this superb mosaic for immediate release. 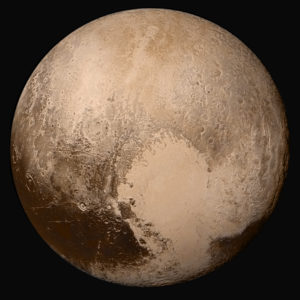 It was too soon to draw many conclusions, but the varied landscape made one thing abundantly clear: Pluto is not boring. Which made everyone even more glad that the United States had sent a probe to visit.

Had the spacecraft succeeded? Had the instruments worked? We didn’t know. We would all have to wait until Tuesday evening to find out.