For our first after-school club meeting of 2019, Mrs. Trembley introduced us both as volunteer NASA/JPL Solar System Ambassadors; I told the students I was the outreach officer for the Warren Astronomical Society, and about the WAS’ free open house and star party – every 4th Saturday of the month at Stargate Observatory – which happens THIS Saturday! 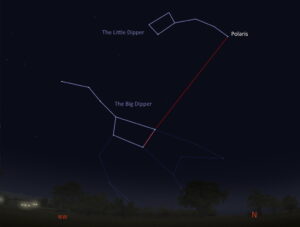 I told the students I work for the Vatican Observatory Foundation, and that I write a weekly “In the Sky” post… and that they should read it. 🙂

We told the students our goal this year was to get them observing the nighttime sky – we’re starting them off with the constellation Ursa Major (and the Big Dipper) – which I wrote about in my latest “In the Sky” post. I was truly surprised by how many of the students had never noticed the Big Dipper in the northwestern sky, or if they had, were unaware of what it was! 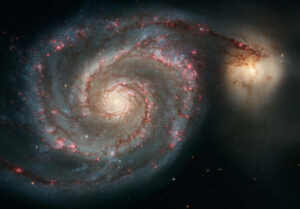 M51 or the Whirlpool Galaxy. Found just above the end of the “handle” of the big dipper (Ursa Major).

I had the students use NASA’s Solar System Exploration Website and its orrery – and they DIVED into it! They brought up planets, moons and space probes; they were all over the place and it was wonderful to watch!

I used Stellarium-Web on a projector, and showed the students how to find Ursa Major in the northwestern sky after sunset. I then zoomed in to Mizar / Alcor and showed it was a multiple star system, and M51, the Whirlpool Galaxy – which some of the students recognized. I gave the students a few minutes to use Stellarium-Web for themselves, and learn the controls.

We gave the students handouts with directions on how to find Ursa Major, and tasked them with finding the constellation this week, and look for Mizar to see if they could see the double star with their own eyes. The handout included a slightly modified version of the Astronomical League’s observing log, which we’ll be using this year.

I showed the video: “The Life Cycle of Stars” on Youtube.

For the last 20 minutes of the club, we let the students explore the two websites they’d used, or run Kerbal Space Program – which several students choose to do!

Next week, my wife wants the students to construct and learn how to use a planisphere – we’ll be using the one from the Cranbrook Institute of Science website.