Look to the top of your screen.  There it says Vatican Observatory—The Catholic Astronomer—Sacred Space Astronomy.  You are looking at one pretty cool science site.  But there is a sister site here, too: Vatican Observatory—Faith and Science.  I edit that site, meaning I get to do cool stuff like read interesting books for the purpose of finding good content for the site, and I have to do tedious stuff like periodically plow through all 500 entries in the site, looking for errors and broken links.

Recently that plowing brought me to, and refreshed my memory of, a really great Vatican Observatory—Faith and Science (VOF&S) entry, on Enrico Fermi (1901-1954).  Fermi was one of the 20th century’s great physicists.  He was awarded the Nobel Prize in 1938.  His contributions to science are too numerous to list here, and the VOF&S entry is not about those contributions; it is about his recollection of the thoughts of an Italian farmer regarding the night sky and God.  It is worth a read.

Much has been said on the subject of Faith and Science.  But the best material on this subject is not discussions of philosophy, or history, or whatnot.  The best material comes from scientists who are men and women of faith, bearing witness to that faith.  This is not to put anyone on a pedestal—not to set Fermi up as a model of faith, or a saint of some sort.  Fermi’s work, for example, advanced our understanding of physics of very small particles in important ways; it also helped to develop nuclear weapons.  Nevertheless, the question of whether faith and science are compatible is never answered so affirmatively* and well as when a scientist, and especially a scientist of Fermi’s caliber, writes on faith.  So CLICK RIGHT HERE for a cool VOF&S entry on Enrico Fermi and an Italian farmer and the night sky.  I think you’ll love it. 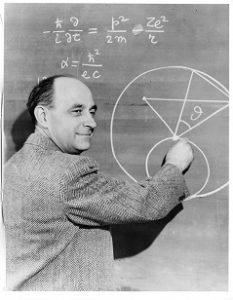 Click on Fermi to go to the VOF&S entry discussed here.

*That the answer is affirmative is important to everyone who is involved in science.  There are students in my classes from a wide variety of cultures who see science as incompatible with their faith, and therefore they will not take science seriously.  Their faith is far more important to them than some science course that is required for a degree that they want.  I need Enrico Fermi (and others) in order to help me engage a diverse student population and convince them that science is for them, too.  All of science needs him (click here for more on that).