One of the newest fields of theology and philosophy is Environmental Ethics. In addition to being new, this field is also one of the more challenging subjects to keep current. The reason for this difficulty is that the rapid growth of technology often outpaces our ability to reflect on a given technology’s moral implications. This lag between the advancement of technology and the moral implications of technology have, at times, allowed for great damage to be done to our environment.

The Adriatic Sea has a rich history, bordering the five countries of Italy, Slovenia, Croatia, Montenegro, and Albania. The waterways were central to the rise and fall of the Roman Empire, involving clashes with the Vandals, Huns, Visigoths, Ostrogoths, the Slavs, and the Ottoman Turks. In many ways, the Adriatic Sea can be seen as a symbolic backdrop for some of the most crucial moments in the history of Europe. (For a more detailed summary of this history, click here.)

In regard to the environment of the Adriatic Sea, the tension between human development and the natural environment is ongoing. One of the main areas of tension is in and around the city of Venice. Most think of Venice as the city of river streets with gondoliers who serenade their passengers on their journey. The same waters that provide for a romantic backdrop have also been the flash point for major environmental struggles.

One of the key struggles in the region of Venice that illustrates the lag between human development and ethics to govern that development is the destruction of wetlands and estuarine (transitional areas where rivers and sea water meet, providing rich ecological habitats). For example, to combat the outbreak of malaria in Venice, it was decided that the watery homes of the insects that carried this disease would be destroyed, removing the fertile grounds for this disease to spread. The plan worked and the malaria outbreak was curbed, but the destruction of these wetlands and estuarine also devastated other local species and disrupted the migration paths of birds between Europe and North Africa. In hindsight, the question lingers: Would there have been a way to eradicate malaria without devastating crucial wetlands and estuarine? These environmental concerns, along with questions about fishing and navigational rights, were central, local concerns for the RSE Symposium.

From the local concerns of the Adriatic came principles that were applied universally. One of the groundbreaking moments of the Adriatic Symposium was a common declaration between Patriarch Bartholomew and St. John Paul II. St. John Paul II called this declaration the most important act of his papacy for that year. At the end of this declaration are six ethical goals that have become foundational for the ongoing development of Environmental Ethics.

1. To think of the world’s children when we reflect on and evaluate our options for action.

2. To be open to study the true values based on the natural law that sustain every human culture.

3. To use science and technology in a full and constructive way, while recognizing that the findings of science have always to be evaluated in the light of the centrality of the human person, of the common good and of the inner purpose of creation. Science may help us to correct the mistakes of the past, in order to enhance the spiritual and material well-being of the present and future generations. It is love for our children that will show us the path that we must follow into the future.

4. To be humble regarding the idea of ownership and to be open to the demands of solidarity. Our mortality and our weakness of judgement together warn us not to take irreversible actions with what we choose to regard as our property during our brief stay on this earth. We have not been entrusted with unlimited power over creation, we are only stewards of the common heritage.

5. To acknowledge the diversity of situations and responsibilities in the work for a better world environment. We do not expect every person and every institution to assume the same burden. Everyone has a part to play, but for the demands of justice and charity to be respected the most affluent societies must carry the greater burden, and from them is demanded a sacrifice greater than can be offered by the poor. Religions, governments and institutions are faced by many different situations; but on the basis of the principle of subsidiarity all of them can take on some tasks, some part of the shared effort.

6. To promote a peaceful approach to disagreement about how to live on this earth, about how to share it and use it, about what to change and what to leave unchanged. It is not our desire to evade controversy about the environment, for we trust in the capacity of human reason and the path of dialogue to reach agreement. We commit ourselves to respect the views of all who disagree with us, seeking solutions through open exchange, without resorting to oppression and domination. (Common Declaration signed by Patriarch Bartholomew and St. John Paul II) 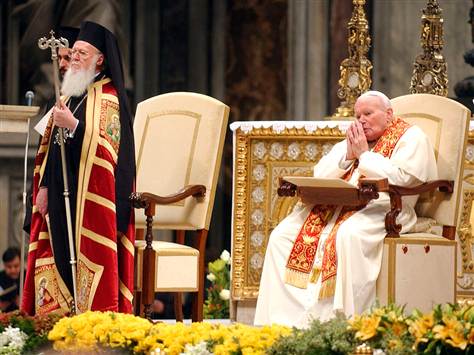 When reading these six ethical goals, one can easily hear some of the core themes of Pope Emeritus Benedict XVI’s writings on Human Ecology and Pope Francis’ emphasis on Integral Ecology in Laudato Si’. Though the agreement by Bartholomew and St. John Paul II may lack specificity about “does and don’ts,” the principles represent broad, commonly agreed upon themes that have been foundational for recent developments in Environmental Ethics. (For a full recap of the 2002 symposium, I have provided this 46 minute video for your enjoyment – I would suggest you read the entire blog first and then return to the video.) 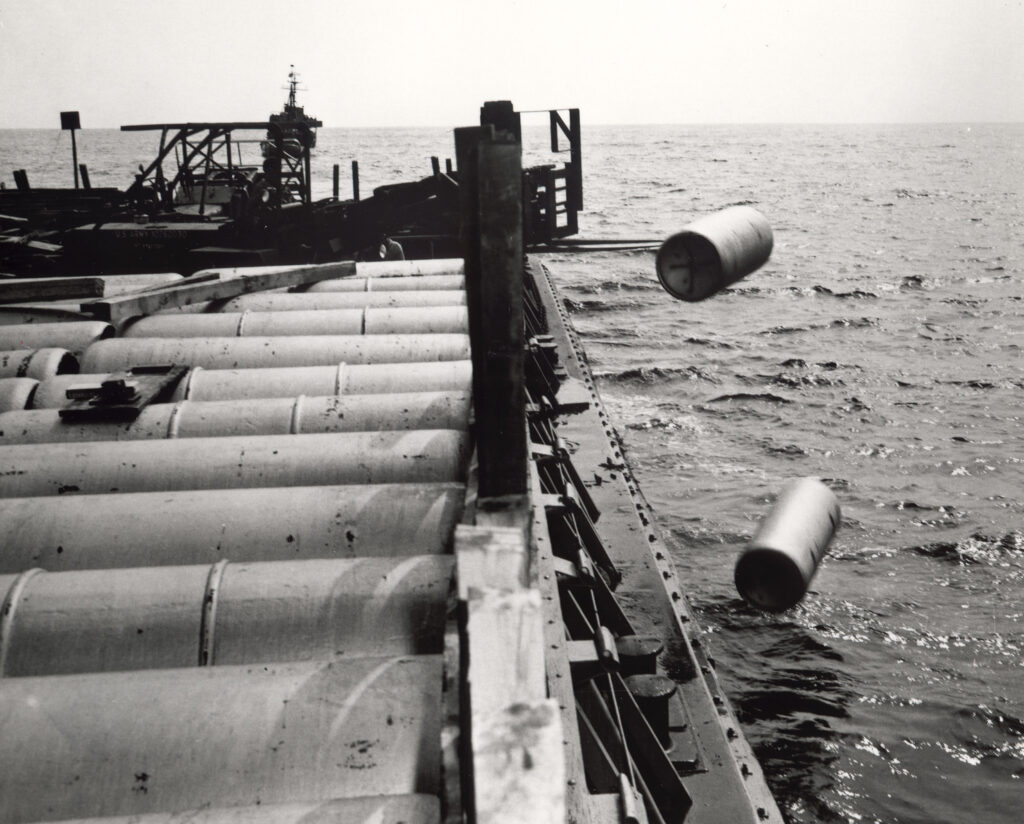 The dumping of chemical agents into the Baltic Sea. Image Credit: AP Photo/ courtesy of the U.S. Army via The Daily Press

If the primary fruit of the 2002 Symposium on the Adriatic Sea was to establish an environmental ethic, the 2003 Symposium on the Baltic Sea hoped to tap into an environmental ethos. Of all the bodies of water visited, the Baltic Sea was the perfect place to try and develop a passion based ethos of change. After World War II, Britain, France, the United States, and Russia dumped the stockpiles of chemical weapons confiscated from Germany into the Baltic Sea. Three-hundred tons of chemical agents, including sarin gas and mustard gas, were cast to the bottom of the sea with their containers slowly corroding ever since. Again, we see the lag between human development and an ethical structure to govern that development. After World War II, it was rightly determined that Hitler’s stockpiles had to be neutralized. However, the longterm ramifications of these toxins on the Baltic Sea were not taken into account, essentially leaving an ecological time bomb at the bottom of these waters that is a threat to this day. (For more insight, read these articles from The Economist and the Smithsonian Magazine).

In light of these and other ecological issues in the Baltic, the symposium establishing key goals to protect these vital waters.

• Limit the discharges into the sea of excess nutrients that cause eutrophication and are harmful to the marine biosphere.

• Stop the discharge of toxic chemicals into the sea.

• Stop the careless introduction of non-native species of fish and other organisms that threaten marine ecosystems and existing species.

• Stop the over-fishing, habitat destruction and other factors that threaten fisheries, and establish a network of marine protected areas in the Baltic.

• Reduce the risks associated with the transportation of hazardous substances across the Baltic Sea; double-hull and clean-ship technologies are urgently needed to avoid oil-spill

• Enhance the capacity of the Baltic Sea states in transition to monitor, assess and manage their marine ecosystems.

• Increase awareness of the sea’s problems and engage in education and actions to eliminate them.

One of the themes from both the 2002 and 2003 Symposia was to focus upon the impact our environmental choices have upon children. The idea was that when our environmental choices are shown to adversely impact the innocent, then a deep passion can be formed in the human heart to change our ecological choices. In other words, the establishment of an environmental ethos is to also spark an ecological movement, creating social momentum to enact substantial change of behavior toward the environment. In a presentation offered by Stefan Edman, a passionate plea was made for people of faith and people of science to embrace a “wonder-revolution” to spark new energy to transform our global attitudes toward the environment.

Dear friends, there is an acute need for such a “wonder-revolution” in our hectic, economistic culture. A lot of people today live far away from nature – smells, birdsong, silence, starry skies – not understanding their deep old roots in the natural eco-cycle systems. Many of them are decision makers, in politics and economy, belonging to the dominant middle-class putting the standard of values in our societies. Science, art and theology – in good synergy – should promote a renewed culture of wondering. Giving inspiration to our struggle for the environment. Promoting a deeper existential base for our lives. Turning us from the ideology of consumerism to contentedness, being more satisfied with what we have, as a holy gift. Such a new attitude and reformed lifestyle will strengthen the health not only of the planet Earth, for example the Baltic Sea – but also our own somatic and mental ecosystems. Wel-fare has today often become bad-fare; people give themselves too little time to rest, to love, only to “live” without being profitable and productive; and so many of us will be exhausted or even burned out. Thus: Inner and outer environment are interdependent. The more harmonic we are, the more energy we are able to deliver in saving the external ecosystems – and vice versa. (Stefan Edman, Presentation: From wonder to action and hope – a new alliance between science and religion? )

This language of “wonder-revolution” serves as a powerful image to create ecological ethos. I also find this plea speaks to the fundamental tension in all of morality and ethics: It is one thing to know what we ought to do, but a different matter all together to do what we ought to do.

This idea of a “wonder-revolution” speaks to what I see as a core issue when exploring Environmental Ethics and Ethos: Given the grave risk science shows us can happen when we abuse the environment, why isn’t the passion to change this reality stronger in our world (or at least in the United States)? The Symposia from the Adriatic Sea and the Baltic Sea show that much progress has been made in establishing Environmental Ethics and Ethos. However, there is also much that needs to be done.

Personally, one of my fears is that human nature tends to embrace a passion based ethos only in the face of crisis. When we see a crisis before us, regardless of what that crisis is, we are more prone to act than when there is no crisis in front of us. Part of the solution of moving people from a crisis based “wonder-revolution” to a proactive, conservation “wonder-revolution” must be found through a spiritual worldview of solidarity and future-looking solidarity, seeking to share the wonder of our world with all peoples, now and in the future. I find this proactive approach necessary because if we wait until crisis to embrace an environmental ethos, it may be too late to reverse damage to our common home and the human family.

This week, let us pray that our world will embrace the lessons learned from both symposia held on the Adriatic Sea and the Baltic Sea. May we embrace a “wonder-revolution” to spark an environmental ethos to move the human heart away from apathy and toward a desire to be good stewards of creation. And may we see in Pope Francis’ call to Integral Ecology, the ongoing development of the themes established by the RSE Symposium and Patriarch Bartholomew.

To view a full summary of the Baltic Sea symposium, I have provided the video below. Enjoy!