It is now the Epiphany (almost).  In my last post (click here for it), just before Christmas, I discussed how the Star of Bethlehem as described in the second chapter of Matthew was no big, blazing beacon like is seen on Christmas cards.  Rather, it was something only astro-nerds—that is, magi—would notice.  The question next is, what was The Star?

In the Vatican Observatory Faith and Science pages you will find an entry for The Star of Bethlehem: The Legacy of the Magi, an interesting 1999 book written by Michael R. Molnar of Rutgers University, and published by Rutgers University Press (click here).  Molnar presents an interesting argument for the Star of Bethlehem being the planet Jupiter.

Molnar studied the astrology of the Greco-Roman world during the time of the Caesars.  He argues that a particular celestial event—namely Jupiter being eclipsed by the moon while in the constellation of Aries the Ram, with the sun just to the east of Jupiter nearby and high in the sky as seen from Jerusalem—would have been seen by astrologers as a great portent relating to a king in the region of Herod’s kingdom.  Molnar’s idea is no a simple thing to envision.  Indeed, Molnar notes, in response to a passage of astrological material from Ptolemy regarding planets and regal births:

Such opaque and arcane writing could very well be a reason that people have advocated much simpler explanations for the Star of Bethlehem.

Interestingly, this “Star of Bethlehem” event could not be seen, because it occurred against a noonday sky as seen from Jerusalem.  But astrologers would have known that the event was occurring, thanks to their calculations of the motions of the celestial bodies.  Molnar argues that we have to think of the sky the way astrologers—magi—at the time would have thought of it.  And those magi would have been excited about Jupiter rising out of the eastern sun, in a constellation connected with the region around Jerusalem, attended by moon, sun, and in fact all the other planets—even if none of it could be seen by a human observer. 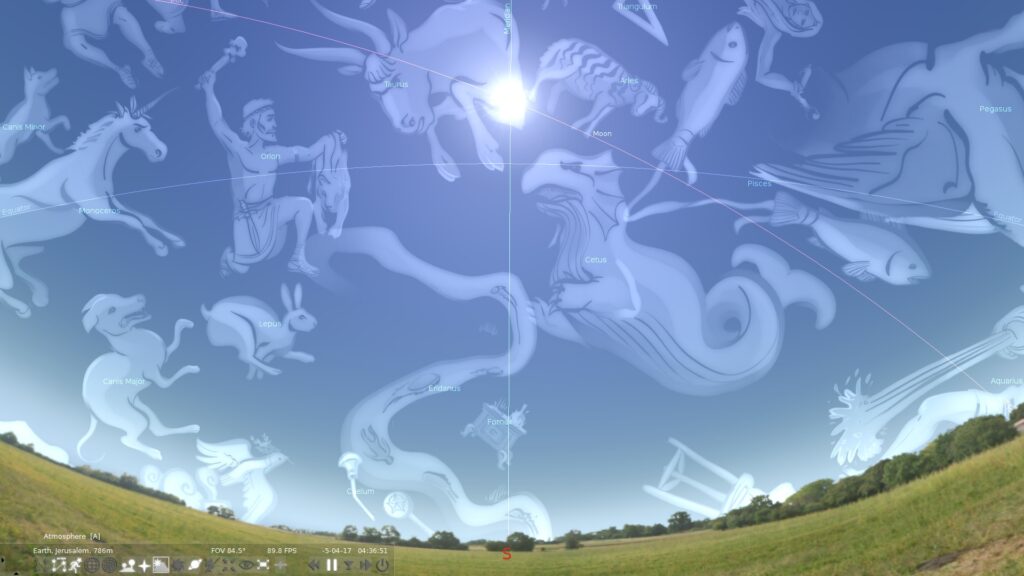 The moon, Jupiter, and the sun as seen from Jerusalem at noon on April 17, 6 B.C., as the moon is eclipsing Jupiter—an event that would have meant a lot to astrologers of the time, even if it seems meaningless to us, and even if it was invisible to them, as seen here. 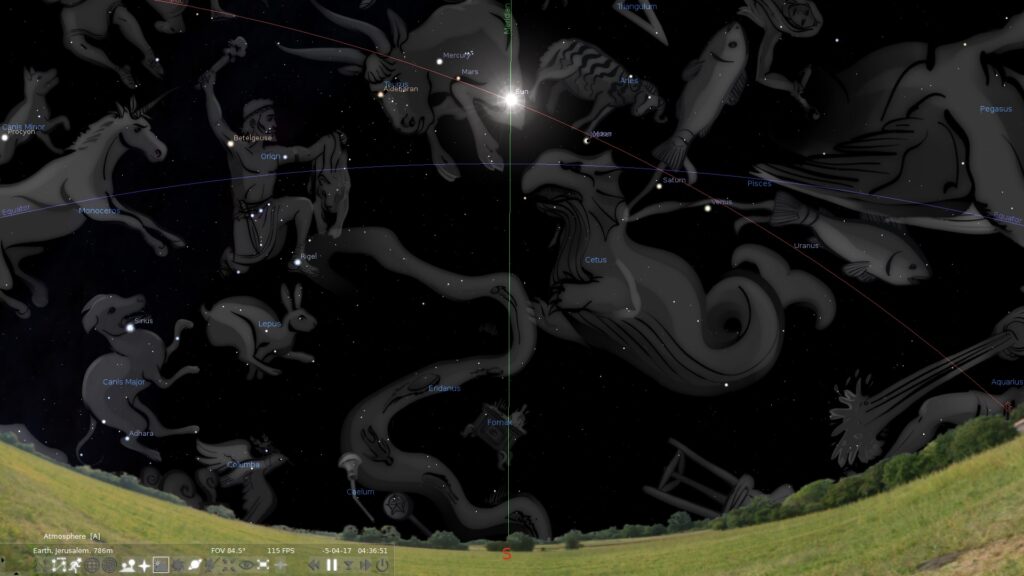 The previous picture, but with the atmosphere “turned off” so as to make the starry sky visible.  Note all the planets. 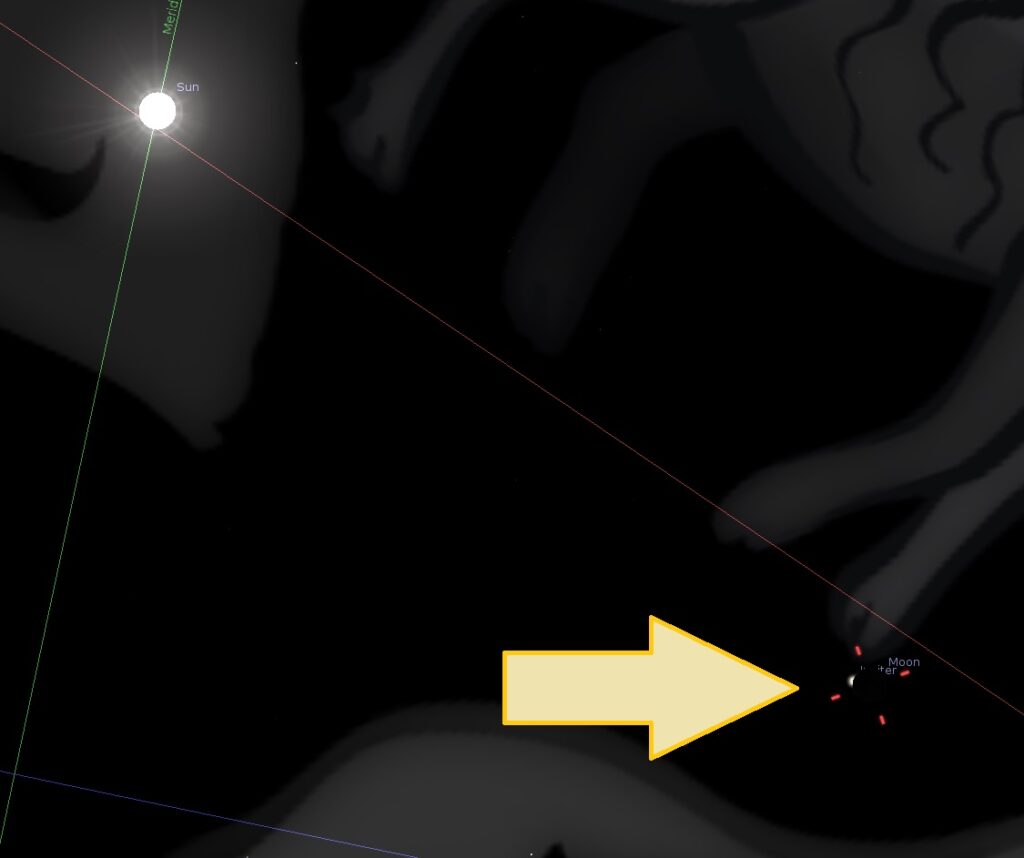 The previous picture, “zoomed in” to show the moon eclipsing Jupiter (arrowed), together with the sun.

Molnar also argues that Jupiter fits the language of the second chapter of Matthew:

After their audience with the king they set out.  And behold, the star that they had seen at its rising preceded them, until it came and stopped over the place where the child was.

Jupiter, like all planets, moves among the other stars.  Thanks to the motion of both Earth and Jupiter around the sun, we can see Jupiter move one way through the stars, then another.  It can “go behind”, and can “go ahead”, of the other stars; it can “stop” among them.

Thus Molnar puts the date of the Star of Bethlehem at April 17, 6 B.C., when Jupiter was eclipsed by the moon in Aries, a constellation that astrologers associated with the region around Jerusalem, on the day when Jupiter was first rising out of the eastern sun.  Thus the magi saw the star “in the east” or “at its rising”.  By the time the magi had found Herod, Molnar supposes, Jupiter was visible in the evening sky.  If we imagine that Jupiter was at one of its stopping points among the stars on the Epiphany, and if we imagine the magi leaving Jerusalem for Bethlehem in the evening (if travel around Jerusalem at night was safe, which seems questionable) then we can imagine the magi seeing Jupiter, stopped among the stars, gleaming in the southern sky, working its way toward Bethlehem (which is south of Jerusalem, but a little to the west) just as they were working their way toward Bethlehem, so that by the time they approached the town it was “stopped” and over the place, as seen from the Jerusalem road.  That puts the Epiphany in late December of 6 B.C. 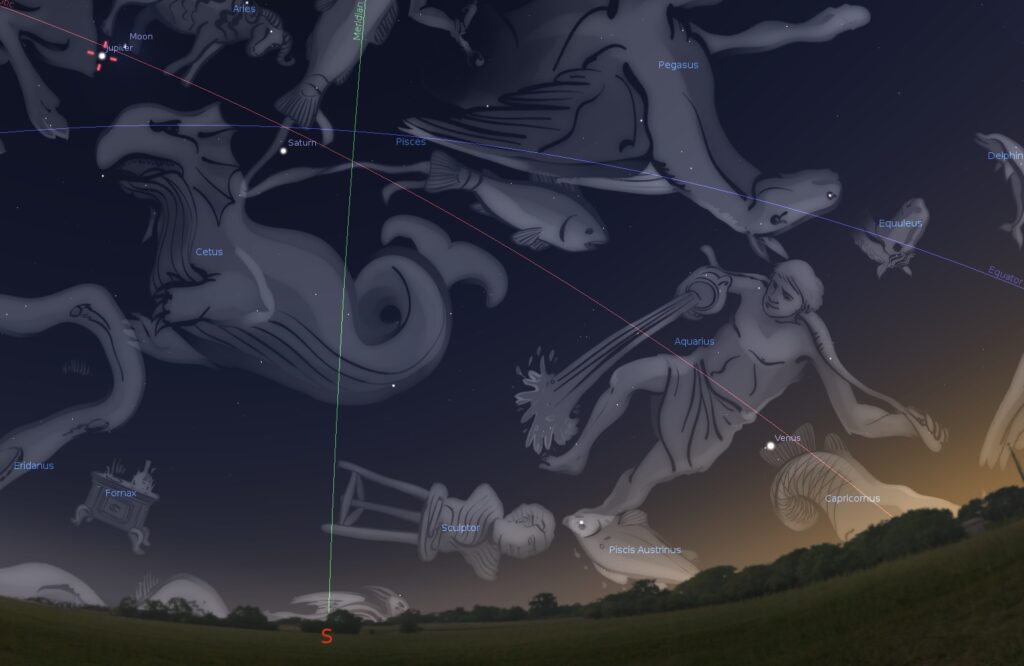 The sky as seen from Jerusalem on the evening of December 21, 6 B.C., with Jupiter standing still in Aries, to the south, in the direction the magi were heading.

Dear Reader of The Catholic Astronomer: do not consider Molnar’s discussion, or any of what I have written here, as being in any way the definitive word on the Star of Bethlehem and the Epiphany.  Molnar has proposed an interesting and plausible hypothesis that can be made to generally fit what is found in the Bible, that is all.  No one is going to know if he “found The Star”.  And other, better, ideas may yet be found.  But, Molnar has shown that it is possible to identify, in a cool-headed, scientifically plausible manner that has generally been well received by scholars, an astronomical phenomenon that fits the description of the Star provided by Matthew.  That’s a pretty fun thing, even if only from a cool-headed, scientifically detached point of view.