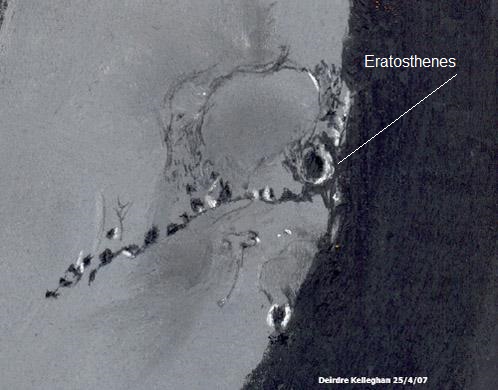 On that cold evening back in 2007 Eratosthenes looked powerful in its position emerging into the suns warm rays. Rupes Recta was also inviting and Plato almost called me again. Even drenched in sunlight Plato’s steel grey floor carried those unmistakable flame shaped shadows. Eratosthenes is a truly dramatic crater, a sweeping mountain chain whips away from it in a visual series, of broken, deep shadows. Montes Appeninus is cut and chopped first by Mons Wolf, and then by Mons Ampere.

Next in line, Christian Huygens name is lent to Mons Huygens named in honour of the discoverer of Saturn’s largest moon Titan . This high mountain (164,000ft) is a billion miles away from those primal methane or ethane seas discovered by the Cassini Huygens mission on one of its routine flybys.

Mons Bradley and Mons Hadley cradle the Apollo 15 lunar landing area from 1971. A mission that put wheels on the moon for the first time. This wonderfully complex mountain highland system is a challenge to sketch.

Sinus Aestuum (Bay of Billows) appeared to have some ray’s barely visible on the undulating floor of the bay. These are most likely issued from Copernicus hiding in the dark night.

I attempted to sketch the seemingly different heights on the southern edge of this bay; differing grey tones gave up ethereal views which never quite came into focus. The elusive rays appeared to hug the lunar surface rising and falling with the land.

The black edge guided my hand to sketch the neat Timocharis and the lunar surface markings visible now to my eye. I was using a lovely jet black Mungyo soft pastel. Just a little pressure on it caused the whole stick to shatter into a million bits and they went all over the drawing like shrapnel exploding everywhere wow!! gently does it with those sticks, nice black though. The corners of these rectangular sticks make clear defined shapes , the black is a perfect black for use directly or on fingers when blending surface areas.

These days I make an effort to bring key craters like Eratosthenes to the attention of children who attend my workshops. It’s good to give moon features context in relation to the historical importance of lunar nomenclature. You can also get really into the spirit of Eratosthenes by taking part in the Eratosthenes Experiment . This is an effort to reproduce his very clever experiment to measure the circumference of the Earth. This year it takes place on March 21st 2017 so you have a short time to get involved but there is a link for doing it on another date and of course there is always next year . You can read all about Eratosthenes the man and his experiment here – You can also register to take part –  http://eratosthenes.ea.gr/