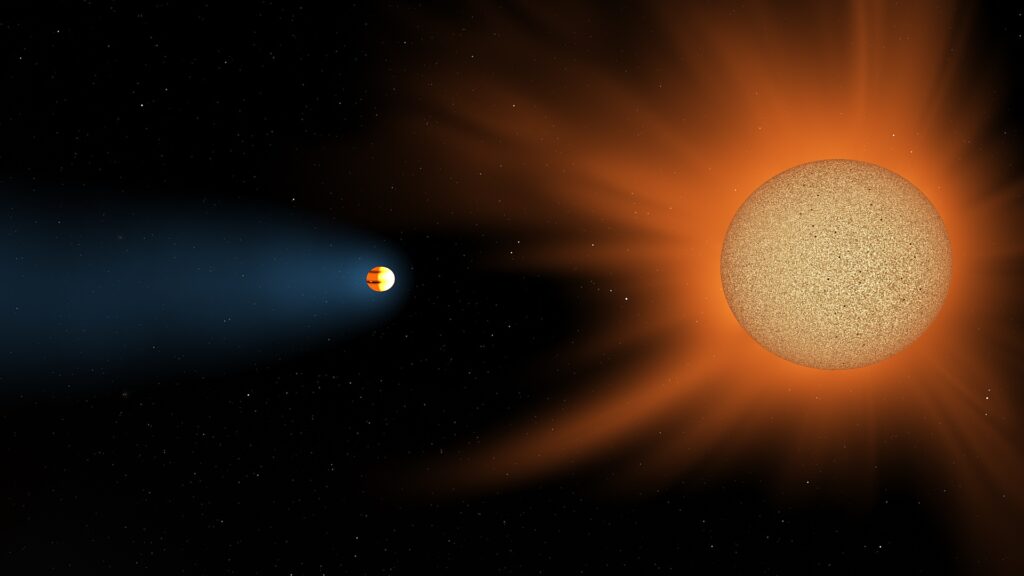 Astronomers have found an exoplanet that orbits its host star every 18 hours – a new record!

Exoplanet NGTS-10 b has twice the mass of Jupiter, and orbits so close to its class K6V orange dwarf host star that the star’s gravity will flatten the planet into an oblate spheroid. The planet is classified as a “Hot Jupiter” – with the star-facing side of the planet being incandescently bright! 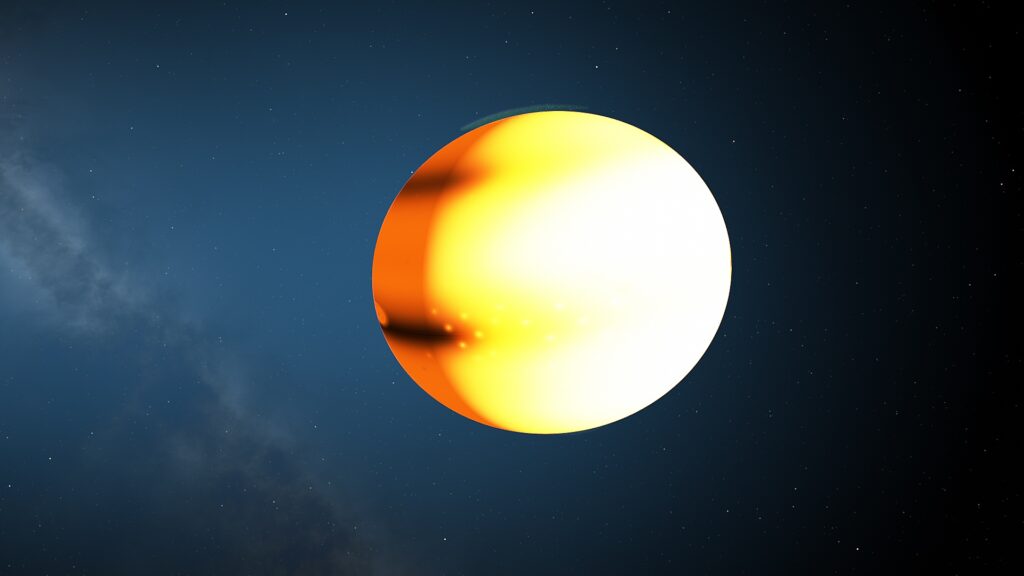 Using data from the announcement paper on arXiv.org and The Extrasolar Planet Encyclopaedia, I added the star and exoplanet into SpaceEngine and took some screenshots; I actually spent quite a bit of time fooling around in this system… I took some artistic liberty with the comet-like tail and wide auroras, but I figured being cooked by the star’s heat, and blasted by the star’s stellar wind will cause the planet’s atmosphere to expand WAY out and be blown away, so why not?!

Over 4000 exoplanets have been confirmed as of this writing, and there are thousands more awaiting confirmation. In my weekly “In the Sky” posts, I include exoplanet artwork – I really want to give the impression that these planets orbiting other stars are actual PLACES. 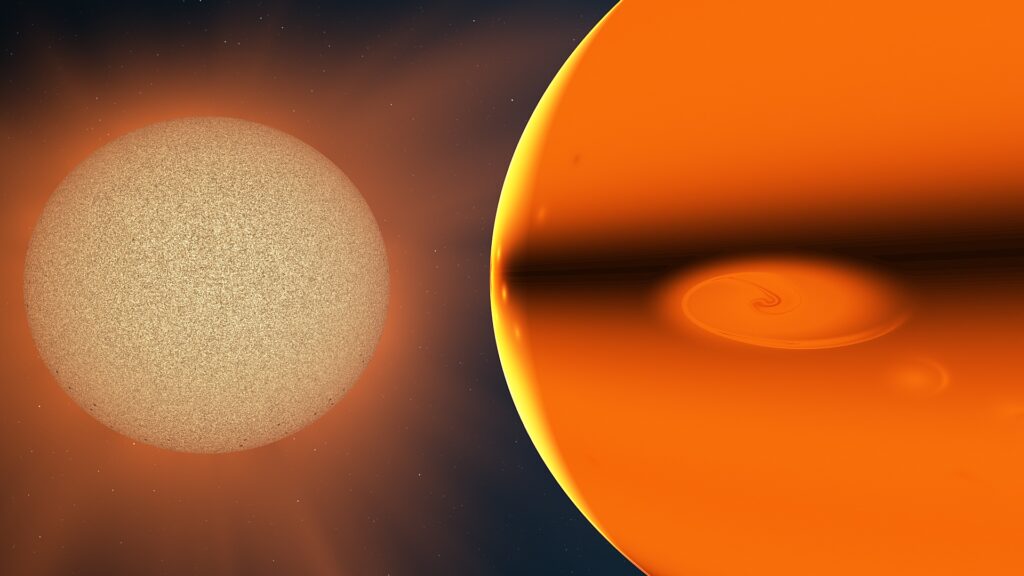 Artist’s concept of a cyclone in the atmosphere of exoplanet NGTS-10 b. Credit: SpaceEngine/Bob Trembley

NGTS-10 b orbits it’s host star at 1.46 times the Roche radius, beyond which gravitational forces will rip the planet apart – a fate likely to occur to this planet in an estimated 38 million years.

Animation of a moon being torn apart by gravitational forces after having crossed the Roche limit. Credit: BBC – The Planets.

The primary goal of the NGTS is to search for transiting exoplanets around bright, nearby stars using a technique called transit photometry, which precisely measures the slight dimming of a star’s light when a planet passes in front of it. Recent discoveries of Neptune-sized planets and super-Earths in other planetary systems have revealed that low-mass planets around solar-type stars are very common, but their composition and structure are extraordinarily diverse and remain open areas of study. The NGTS is designed to fill this observation gap between Earth-sized planets and gas giants, by searching for planets with diameters between two and eight times that of Earth. – ESO

Not being satisfied with playing with NGTS-10 in only one simulator, I created the NGTS-10 system in Universe Sandbox too: 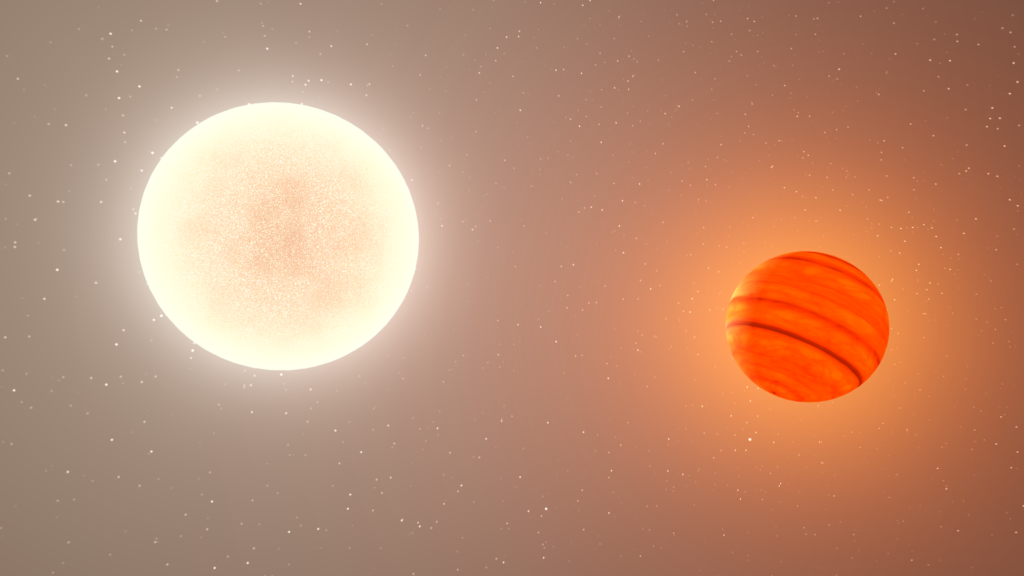 Simulation of exoplanet NGTS-10 b and its host star. Credit: Universe Sandbox/Bob Trembley

I’ve shared this Universe Sandbox simulation of the NGTS-10 system on Steam: [LINK]

Universe Sandbox can simulate the break-up of bodies that have crossed the Roche limit, so I tweaked the orbit of exoplanet NGTS-10 b in Universe Sandbox until it was just at the point where it started to break-up:

I’ve shared the break-up simulation of exoplanet NGTS-10 b on Steam: [LINK]