In my last post we discussed why astronomers say “The universe is expanding.” But there is something important that we did not discuss in the last post. And that is this:

We do not actually see the universe expanding.

Or so we think.

The problem is, galaxies move so slowly, compared to their size. A galaxy can measure 100,000 light years across—in other words, a galaxy can be so large that a beam of light would require roughly 100,000 years to travel from one side of it to the other. But this also means that a galaxy is so large that, even if it were travelling at the speed of light, it would require 100,000 years just to vacate the space it currently occupies. See the picture below? That is a “magical real-time animation” of a galaxy moving to the right at the speed of light. Truly! Just watch the screen for a few hundred thousand years, and you will see the galaxy move right out of the picture. And you only have to watch for a few thousand years before you might maybe notice some change. Galaxies don’t actually move at the speed of light, so the bottom line is this: we do not actually see galaxies move.

Magic real-time animation of a galaxy moving to the right at the speed of light. Keep watching. By the year 7018 maybe you will notice some change. 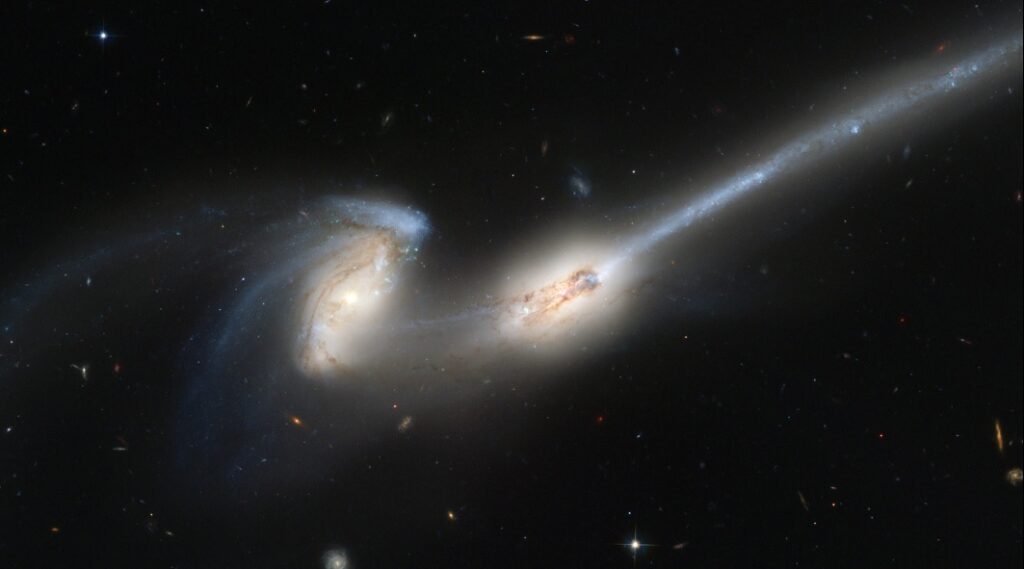 Two galaxies colliding. This is truly a “slow-motion train wreck”—it will take a very, very long time before we see any change in this picture.

Then what about all the stuff discussed in the last post? What about Edwin Hubble’s discovery in the late 1920’s that those galaxies that are more distant are moving away from us faster? What about the Hubble Plot? 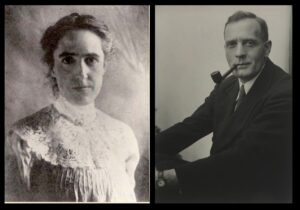 Hubble made his discovery because Henrietta Leavitt figured out how to measure vast distances in space using certain kinds of stars as standards of measurement. A decade or so prior to Hubble, Leavitt discovered that the brightnesses of certain stars (stars with a certain peculiar pattern of fluctuations in light output) could be predicted, and then the predicted brightness could be compared to the observed brightness to estimate distance (the dimmer the star appeared vs. what was predicted, the farther away the star must be). Leavitt achieved what was arguably one of the biggest breakthroughs in the history of astronomy—and Hubble used Leavitt’s stars to measure the distance to galaxies, and without Leavitt’s stars he would have not made his discovery.

So if Hubble used Leavitt’s stars to measure the distance to galaxies, how did he measure movement of the galaxies? Obviously he could not see them moving. He measured their movement using the “Red Shift”—a reddening of the light emitted by each galaxy, caused by the Doppler Effect. The Doppler Effect is the same effect used in Doppler radar used by police to clock the speeds of cars on a highway. More Red Shift means more movement away.

So here is the key point: Hubble did not actually measure galaxy distances and galaxy movements. He measured brightnesses (of Leavitt stars in the galaxies) and Red Shifts (of galaxy light). From these, he used Leavitt’s method and the Doppler Effect to calculate distance and movement. Astronomers since Hubble have accepted all this. 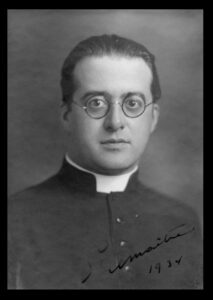 You see, around the same time that Hubble was doing his work, Fr. Georges Lemaître, a physicist and a priest, used Albert Einstein’s theory of relativity to calculate that the universe must be expanding—and that at one time the universe had been much smaller than it now is, and that in fact Einstein’s theory implied that the universe and even time itself all began on a “day without yesterday.” This was the Big Bang theory, and within the scientific community there were those who considered this priest’s theory to be nothing more than an effort to use science to bolster religious ideas—a new spin on the story of Creation from the first chapter of Genesis. (The usual scientific view at that time was that the universe is eternal and unchanging, and thus with no beginning.) Certain figures in the scientific establishment of the Soviet Union in particular dismissed Lemaître’s theory of a universe with a beginning as being just religion in disguise (more on that in the next post).

Edwin Hubble also did not care for the idea of a beginning to the universe. Whereas in the 1920’s Hubble had announced that he had found that the more distant galaxies were moving away from the Milky Way faster, in 1942 he wrote an article entitled “The Problem of the Expanding Universe”* in which he argued that the Doppler effect measurements of velocity that he had given earlier were probably erroneous, and that the changes in light from distant galaxies that he had earlier interpreted as Doppler Effect were instead due to some unknown phenomenon. Hubble wrote:

Red shifts are due either to recession of the nebulae [i.e. galaxies] or to some hitherto unrecognized principle operating in internebular space. The latter interpretation leads to the simple conception of a sensibly infinite homogeneous universe of which the observable region is an insignificant fraction. The alternative interpretation of red shifts as velocity shifts leads to a particular type of an expanding universe which is disconcertingly young, small and dense.

Hubble went on to argue that the evidence did not favor the interpretation of red shifts as being due to the velocities of galaxies, and concluded—

…on the basis of the evidence now available, a choice seems to be presented, as once before in the days of Copernicus, between a small, finite universe, and a sensibly infinite universe plus a new principle of nature. And, as before, the choice may be determined by the attribute of simplicity.

Astronomers today do not agree with Hubble on this. For many reasons, they overwhelmingly accept the idea that the Red Shifts do indicate motion, and that the universe is indeed expanding, and that Fr. Lemaître’s Big Bang theory is valid. But it is not impossible that Hubble could be right. At some point in the future, we could find out that something else causes the Red Shift. That would not be good news for the Big Bang theory, and it would really stir things in science generally. I would not bet on that happening, but if you read my recent post on Kepler and giant stars, you know that sometimes we scientists can be smart and can do things right and get the measurements right, but still come to the wrong conclusions because we do not understand what we are measuring. But right now, to the best of our knowledge, the galaxies are moving away from us and, “The universe is expanding.”