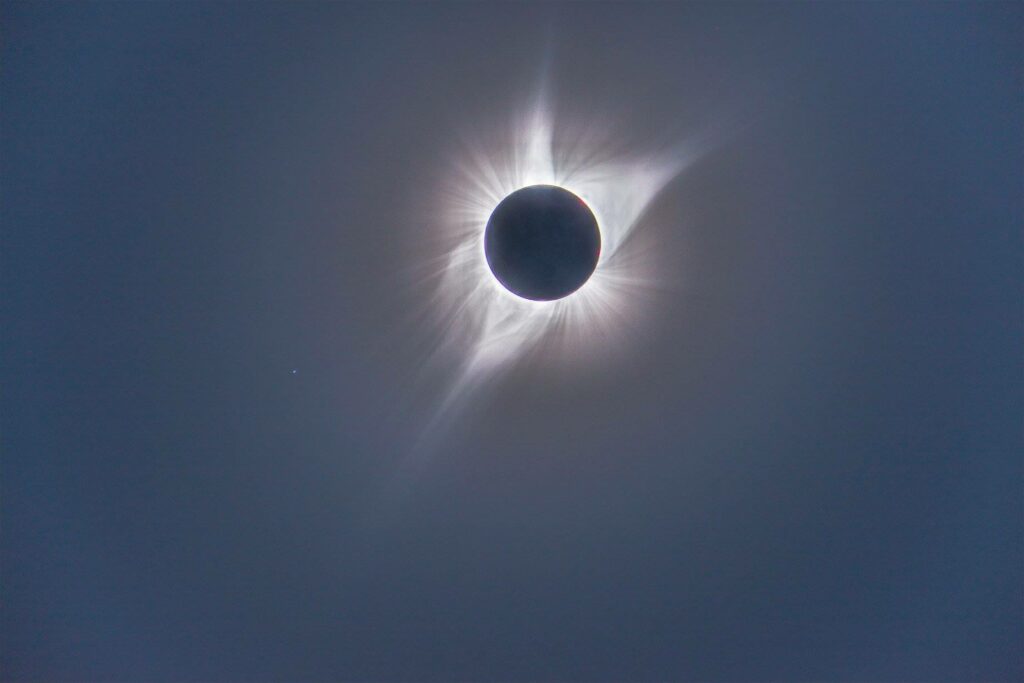 This stunning image of totality was taken by Michael Cain form the Chippewa Valley Astronomical Society (CVAS). I want to thank him for allowing me to use his images.

The other day, I called a good friend of mine with some “priest business.” The call had nothing to do with astronomy or the eclipse, but the first words out of Brian’s mouth were, “James! I was in totality!!” The statement surprised me on two levels. One, I didn’t know he was going on a road trip, and, two, he really isn’t into astronomy.

It turns out that Brian had a “happy accident,” to quote Bob Ross, having planned a trip to Lincoln, Nebraska earlier this year to visit some of his classmates from seminary. When he began to get things ready to leave on his trip, it dawned on him that the dates of his visit coincided with the solar eclipse.

As he recounted the details of his experience, both of us naturally started to gravitate toward faith language to talk about the event. I shared with him that I have heard people say that totality is almost an “other-worldly” experience, feeling like they are momentarily taken to a difference place and allowed to see our solar system from a completely different perspective. 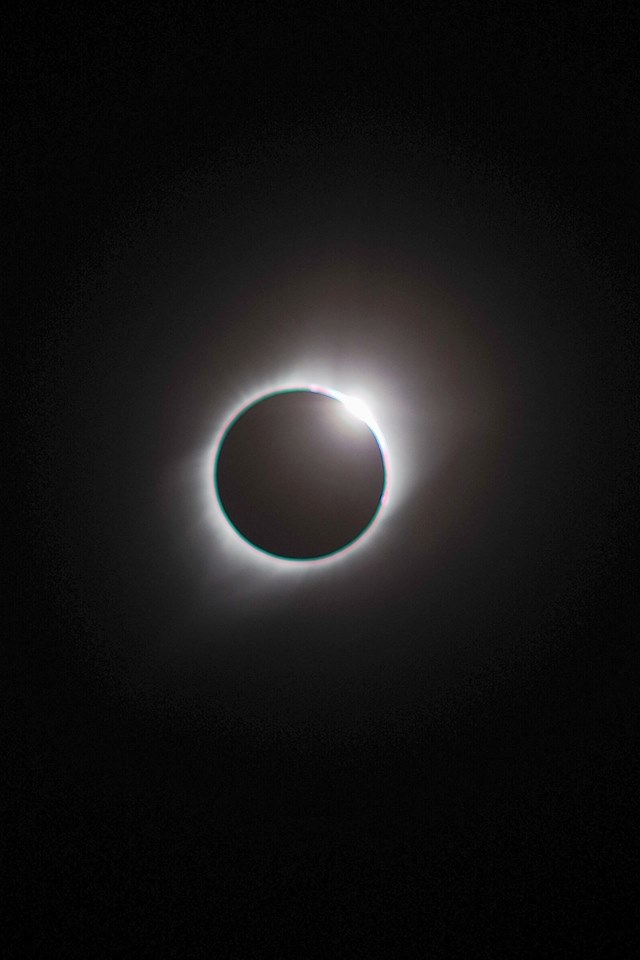 The beginnings of the “Diamond Ring.” Image Credit: Michael Cain

Brian’s most impactful moment was during the end of totality when the second “Diamond Ring” appeared. With strikingly vivid language, Brian said he felt like he was at the tomb of Jesus. At first, he was simply trying to be attentive to the shimmering light of the sun through the moon’s valleys, accentuated by the solar prominences. Then, it happened, the light of the sun turned a stunning white, allowing the diamond ring to appear. Brian said it was an experience so powerful that it made him wonder if this is what the Roman soldiers experienced when the stone was being rolled away from the tomb after the resurrection. I could tell that the experience left a deep impact on him.

We then talked about our small stature in the universe and how Brian experienced deep awe and wonder during totality, realizing how tiny we are in God’s creation. As I have reflected on with you before, awe and wonder is associated with the Biblical understanding of Fear of the Lord – the beginning of wisdom. I then shared with him that the more I understand science, the more I am comfortable with who I am in my smallness, seeing it as affirming my significance, not hindering it.

Does size really matter in the universe when it comes to God? Depending on how we understand size, yes, it does. The goal of the spiritual life is not to increase, but decrease, voluntarily placing ourselves in the lowest place. I shared with my friend, “The larger the universe becomes, the more my spiritual life is affirmed.” Put another way, the smaller I become not only physically, but spiritually, the more I am comforted that God loves me in humility, not when I am proud and haughty.

“James, you HAVE to go and see totality sometime in your life!” These words hit a chord, realizing that it would have been nice to see totality. Nevertheless, I was so happy for Brian, enjoying his passionate recollection of the eclipse. “Brian, events like this help people understand why I like to ‘geek out’ about this so much!” He began to laugh, affirming not only his positive experience with totality, but acknowledging that this experience also gave him new insight into me, adding a new dimension to our friendship.

As we concluded our conversation, Brian simply said, “James, a thought hit me while I was watching totality: When was the last time people really looked to the heavens?” I knew, intuitively, that his statement was both literal and metaphorical. In the literal sense, we discussed how astronomy was once the science of priests, constructing calendars and establishing feast days. In the metaphorical sense, he also implied that we need to gaze in awe and wonder not only at the beauty of creation, but also to fix our gaze upon God who brought all things into existence.

Another friend of mine, a Doctor of Biology by the name of Anne, also experienced totality and was eager to share her experience over a cup of coffee. Anne’s trip was a bit more colorful and comical than my brother priest’s recollection of totality. After recounting the troubles she faced actually getting to a place where she could camp out to view totality, ending up on a farm with the “guest bathroom” in an underground bomb shelter, Anne began to share her totality experience.

Predictably, Anne’s explanation as a scientist was less religious and more attentive to the particulars of the unfolding of totality. Anne is a birder, having catalogued an impressive life list of bird observations in addition to participating in bird count research with numerous organizations. She shared two articles with me from eBird, a citizens’ science program out of Cornell University, that asked its participants to track bird behavior during totality. She explained that certain song birds will start their morning calls shortly after totality is completed and night hawks will begin their evening routine during totality. Though her description was more scientific than spiritual, what came to mind was how this experience impacted more than just its human observers, but all of creation was both impacted and participated in this event. 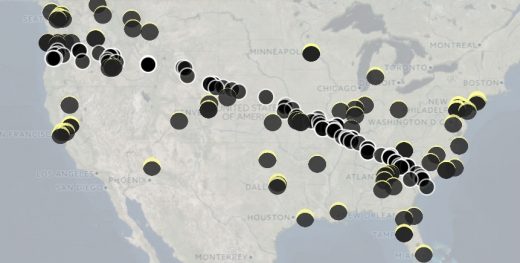 Click here or on the image to look up bird behavior data from totality. 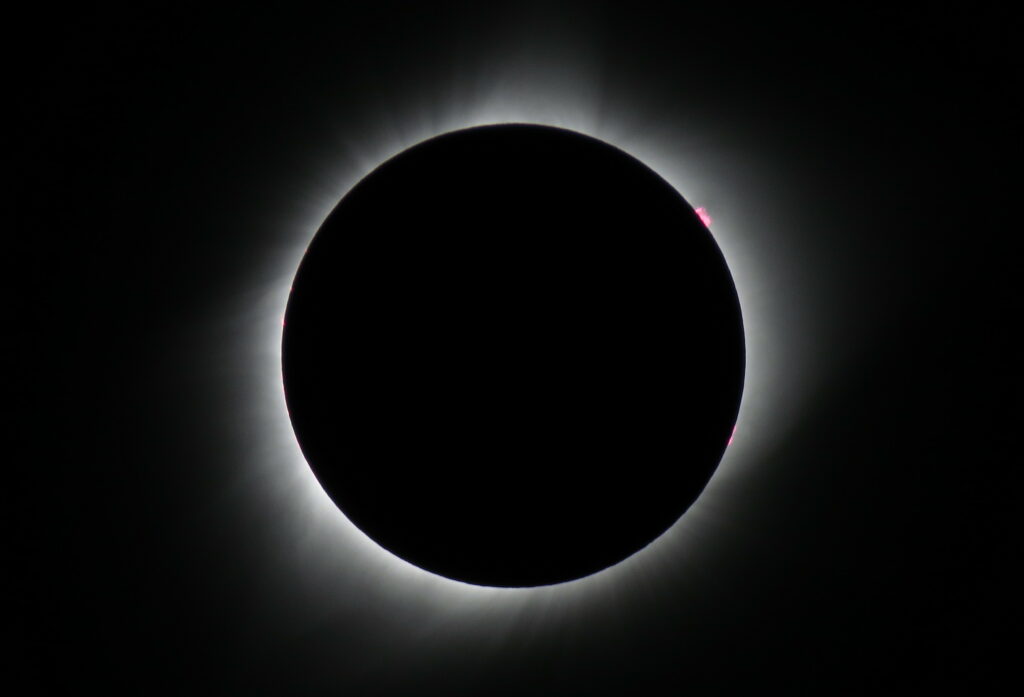 One of Anne’s first attempts at solar photography. Beautiful prominence at 2:00!

From there, Anne shared with me her pictures, stunned that her simple, store bought camera you can find at any “big box” store took such stunning images of the sun. It led to a discussion on how solar observation is somewhat the reverse of observing deep sky objects: Instead of a light bucket, viewing the sun is about light reduction and filtration. In addition to the spectacular image she took of solar prominences, I found great humor in her picture of the land owner on top of his homemade, underground bomb shelter, watching the eclipse through a welder’s mask.

The main theme of Anne’s experience was how quickly everything happened, but how long-lasting the impact has been upon her since the event. When I asked Anne if she had a religious experience during the eclipse, she struggled to find the right words. She explained how her spirituality as a biologist is deeply connected with the outdoors. She has been to most of the major national parks and sought out rare and pristine regions of our planet’s environment. Anne explained that of all the experiences she has had in her travels to some of the most beautiful places on Earth, totality was more impactful than all of them. She also affirmed that the spiritual meaning for her was still being unpacked, trying to digest the brief moments of totality. Similar to my priest friend, Anne said to me, “You HAVE to experience totality at some point of your life! You of all people!”

It has been such a blessing to watch so many of my friends post images on social media of their experience of totality. I have greatly enjoyed Christopher Graney and Bob Trembly’s posts about their experiences of the eclipse for The Catholic Astronomer. I was watching the evening news one night, and the host stated that, “We needed this event.” I agree. Amid the fears and stresses that have been emerging globally, the eclipse was a moment when the vast majority of people gazed in wonder at something that is a true rarity in the universe. This moment gave many a sense of joy, celebration, and optimism. Dare I say, God used this moment to infuse our hearts with a moment of unifying love and peace. 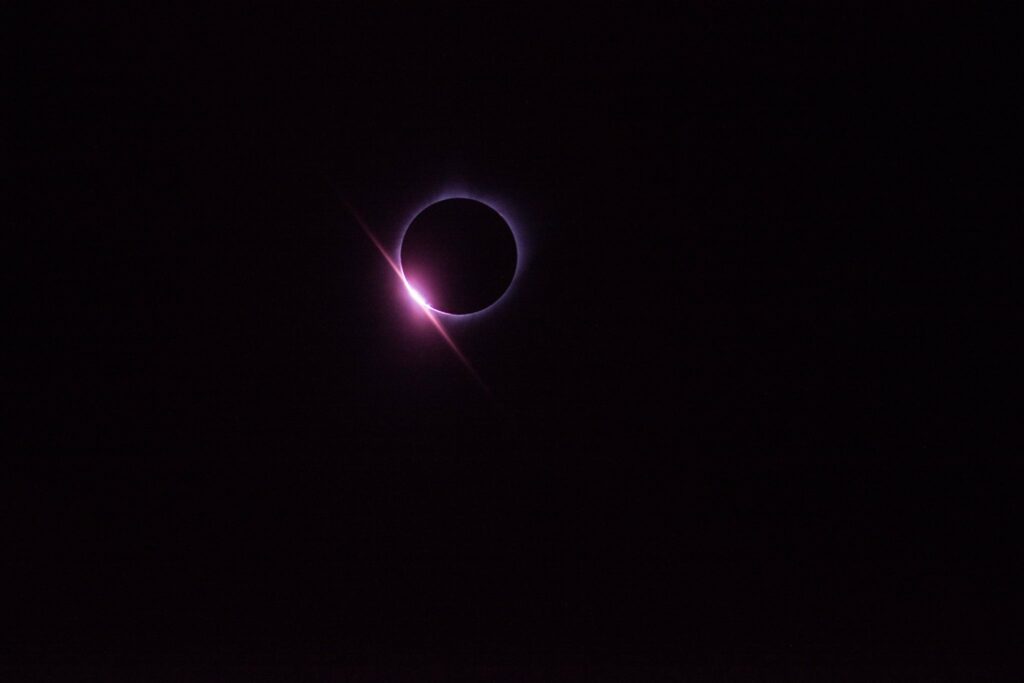 Both these conversations I mention lasted about an hour and a half with the majority being a monologue from my friends who wanted to share their experience of totality with me. Both of them were amazed that I didn’t plan a trip myself, but I explained to both that it was clear to me that I needed to experience this event with parishioners. Yes, it meant not seeing totality, but the experience I had with my parishioners at St. Joseph Parish is something I deeply treasure. I saw in all the people who attended a palpable joy, whether they were young or old. I find this experience a rarity in priesthood, trying to put together events that can touch all people of all ages. Why should I be surprised that the event that was most successful for the year was not created by my hands, but by God’s?

Despite my comfort with not seeing totality, there was a part of me that had a twinge of jealousy while listening to the experiences of these two friends. Some people may even dismiss the idea of making such a journey, seeing a nine hour drive or an eleven hour flight a bit of a waste of time for something that lasts about two minutes. At the same time, while listening to my friends’ powerful recounting of totality, it reminds me that time can be perceived in two ways – moment to moment and as an eternal, sacred moment. Therefore, to those who ask, “Why would someone drive nine hours to experience something that lasts only a couple of minutes?” I offer this simple answer: Because there are experiences in life worth having in which two minutes can contain the joy of eternity.

A brief animation video I put together of Michael Cain’s images of totality. Enjoy!