Let’s see… how many ways will the world end, this week? 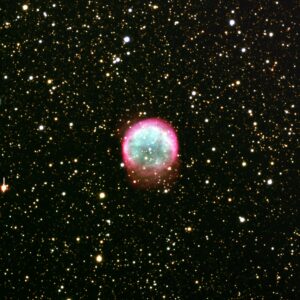 False color image of the planetary nebula NGC 6781. The bright star at the center of the nebula is the source of the gas and dust that make up the nebula. The reds and purples are ionized hydrogen; the blues and greens are primarily ionized oxygen.

We’ve got the Corvid-19 virus; it has killed too many people already, scared a lot more, and disrupted everybody’s life right now, whether they are scared or just being reasonably cautious. (Thanks to that virus, we have had to postpone our biennial Vatican Observatory Summer School for a year, to 2021, simply because arranging for international travel for students from around the world to a country, Italy, that has been one of the first hit has become awkward, to say the least.) I am planning to travel later this month; I hope it will still be possible.

We’ve got politics as worse than usual in many countries of the world; the only thing that unites us all, it seems, is horror at those other leaders who disagree with me.

We’ve got conflict within the Church, the folks supporting our work, with all sorts of nasty innuendos passed back and forth.

Plus wars, and rumors of wars. 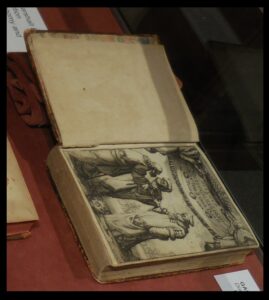 An original copy of Galileo’s Dialogue Concerning the Two Chief World Systems—Copernican and Ptolemaic (written in Italian, not in Latin).

Know what it reminds me of? Galileo. When he was trying to get his famous book on the Two World Systems (the one that got him into trouble) published in Rome, the negotiations took forever because for much of that time Florence (where Galileo was) and Rome (where the Pope was) were quarantined due to the plague. The time all this was happening was right at the height of the 30 Years War, which split Europe apart not only along religious lines but also on political lines; in fact, the Pope whom Galileo was negotiating with was being accused of being a closet Protestant because he wasn’t doing more to support the (supposedly pro-Catholic) Spanish side against the side led by the Protestant King but financed by the (supposedly Catholic) French.

Want to know more about Galileo? Check out our Faith and Science Resource Site’s Galileo pages…

And yet, even as Galileo suffered from a very unjust trial, somehow his ideas survived. And we all remember Galileo. Do you recall the name of the Pope? Or his enemies? Or can you name one general of the 30 Years War? (If so, you’re probably a fan of a popular time-travel series of SF books set during that time!)

Meanwhile, did you remember to subscribe to Sacred Space Astronomy? Last diary here, we had 9637 on the roll call and 161 paid subscribers. As of today, the numbers are 9765 on the roll call, and 163 subscribers… it is nice to keep growing but I could wish we grew faster. (If a virus can spread exponentially, why can’t we?) Please, tell more people about our site; and if you can, please subscribe at a rate of $10 a month (cheaper than a Himalayan Salt Lamp!) or $100 per year. Or even consider signing up a friend or two