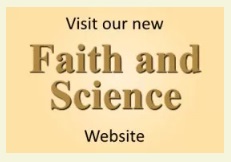 Have you noticed the little ads for the Vatican Observatory Foundation’s “Faith & Science” resource?  This is a collection of articles, videos, book excerpts, selections from this blog, and even whole books that pertain to faith and science.  There are all kinds of interesting things in it, such as a poem of prayer and praise written by James Clerk Maxwell (Maxwell developed the theory of electromagnetic waves—he ranks just behind Newton and Einstein in the Hall of Fame of Science).  And, there are the Louvain Lectures of a young Jesuit named Robert Bellarmine (click here to go to the Louvain Lectures entry on the Faith & Science pages). 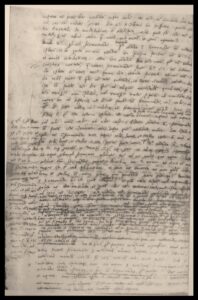 The chicken-scratch lecture notes of a young Bellarmine.  So much for the idea that they taught good penmanship and organization “back in The Day”. (Click image to enlarge.)

One of the topics Bellarmine wanted to discuss at this time was God’s work on the third day of creation, as described in Genesis 1:14-15, when the sun, moon, and stars are created.  One question that specifically interested Bellarmine was whether or not the stars are attached to a single celestial or heavenly sphere.  Does a “starry sphere” or “starry heaven” or “sphere of the sky” exist, so that the stars rise and set because of the rotation of that sphere around Earth?  Or, are the stars independent of any sphere?  He writes:

Are the sun and the stars fixed in heaven and so move with the motion of heaven, or do they themselves move, heaven remaining still?

(Throughout this post I tweak Baldini and Coyne’s translation a good bit.)  Bellarmine is of the opinion that the stars are not fixed to a celestial sphere.  He notes one argument for his opinion that is based on a direct reading of scripture—

St. Augustine leaves the question in doubt, but Chrysostom [and others]… posit as a necessary truth of Scripture that the stars are not fixed.  For just as Scripture says that God placed lights in the firmament of heaven, later on it says that God placed the man in the paradise [of Eden, Genesis 2:15]; however, it is certain that the man was not fixed to one point in paradise.

He also notes a philosophical and scriptural argument—

But be [the above] argument valid or not, if we wish to hold that the heaven of the stars is nothing if not one thing, made of fire, or air—a hypothesis which we have declared more than once to be more in accord with the Scriptures, we must then of necessity say that the stars are not transported with the movements of the sky, but that they move by their own motion, like the birds of the air and the fish of the water.

Stars unattached to any sphere, like birds in the air or fish in water, was a scientifically unorthodox idea in the 1570’s.  This idea Bellarmine was advocating broke with the usual Aristotelian teaching on the structure of the heavens.  But Bellarmine notes that the planets (that is, wandering stars) do not move along with the stars; obviously they are not fixed to some starry sphere; clearly they move individually in some way.  But whatever, he continues,

This is not the business of the theologian to investigate diligently, especially when the debate still runs among astrologers over how to explain these sorts of phenomena.  Some explain them by means of the movement of Earth, with the stars at rest [i.e. the heliocentric system of Copernicus]; others by means of epicycles and eccentrics [i.e. the geocentric system of Ptolemy]; others by means of the motion of the stars on their own.

In other words, Bellarmine says that there are a variety of theories floating around within the scientific community to explain the motions of the stars.  And so, he continues (and now I am including Bellarmine’s original Latin, because here is where things get really interesting):

Bellarmine obviously is of the opinion that the theory that best conforms to scripture is the one in which the stars move on their own.  He chooses that one.  But what if evidence is found showing that stars in fact do not move on their own, and that they really are fixed to a celestial sphere?  Well, says young Bellarmine—

The twenty-something Bellarmine has just said that there can be no conflict between science and scripture.  When the science is uncertain and various theories are in competition, accepted interpretation of scripture can be a guide in choosing which theory seems most attractive.  But, he says, when the science is solid and the truth of the matter well established, then science will guide the interpretation of scripture.  Put another way: Jesus referred to the mustard seed as the smallest of seeds (Mk 4:31); a literal interpretation of that verse is possible only so long as no botanist has turned up some smaller kind of seed.

So, you may be saying, that’s all nice.  But isn’t this talk about scripture and stars and celestial spheres all pretty arcane and esoteric?  So what of it? 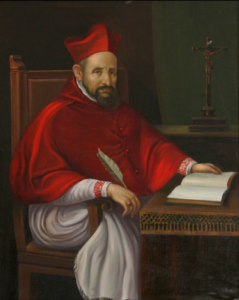 Well, it turns out that Bellarmine used this same argument when he was much older, in a debate that is much more famous than any debate over stars and spheres:

I say that if there were a true demonstration that the sun is at the center of the world and the earth in the third heaven [i.e. the third orbit from the sun], and that the sun does not circle the earth but the earth circles the sun, then one would have to proceed with great care in explaining the Scriptures that appear contrary; and say rather that we do not understand them than that what is demonstrated is false.

This quotation is from a famous letter Bellarmine wrote in 1615, regarding scripture and the heliocentric system of Copernicus.  In this letter, the seventy-something Bellarmine explains at length why he thinks scripture supports a geocentric (earth-centered) universe.  He notes that one could argue that scripture speaks “in accordance with appearances, since it seems to us that the sun moves (while the earth does so), just as to someone who moves away from the seashore on a ship it looks like the shore is moving.”  But he is of the opinion that the theory that best conforms to scripture is the geocentric theory.  He has obviously chosen that one.

But if evidence is found that Earth really does move?  Then we have simply found the seed that is smaller than a mustard seed; we adjust our interpretation accordingly.  We do not, he says, insist that something that has been demonstrated to be true is in fact false.  We do not claim that, no, the botanists are wrong and that, because Mark 4:31 says the mustard seed is the smallest of seeds, there is no seed smaller than a mustard seed.  The verum sensum scripturae does not hinge on seed sizes or on whether or not the Earth moves.

But until there is some demonstration that Earth indeed moves, Bellarmine says, we can choose the theory which best seems to conform to scripture.  Moreover, “in case of doubt one must not abandon the Holy Scripture as interpreted by the Holy Fathers.”

Bellarmine’s Louvain Lectures of the 1570’s and letter of 1615 show that he was willing to consider unusual ideas and that, over a span of multiple decades, he believed that scripture should be interpreted in light of scientific evidence.  But that should occur only when the evidence is really solid; meaning that so long as there is any doubt, traditional interpretations stand.  That’s pretty interesting stuff.

I have students who take my astronomy class at Jefferson Community & Technical College in Louisville, Kentucky who, for reasons related to their faith, have some hesitancy (or a lot of hesitancy, or a whole lot of hesitancy) regarding science.  Bellarmine’s work is just the sort of thing that might help me reach those students—at least enough to get them to worry a little less about science, and to be a little more open to studying it.  Also, Bellarmine is often portrayed as having sort of a “the Earth stands still because the Bible says so: end of story” attitude.  So, the Louvain Lectures might help students to take a very clear-eyed approach to popular portrayals of historical figures.

(I should add that Louisville is also home to Bellarmine University!)