Father Theodore Hesburgh, C.S.C., has passed away. I guess I knew this day would come—he was 97 years old—but it has always been a comfort to think Father Ted was still walking the Earth. As President of the University of Notre Dame for 35 years, including the years I attended, he came to personify the school. He wasn’t a scientist, but he was very much a friend to science. 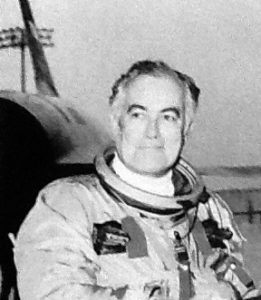 Father Theodore M. Hesburgh, president of the University of Notre Dame, after a Mach 3 flight in a Lockheed SR-71 Blackbird at Beale Air Force Base in California, February, 1979.

Of his life as a priest, theologian, educator, administrator, diplomat, and champion of civil rights, you can read good accounts from the South Bend Tribune, the New York Times, or Notre Dame’s memorial site. Let me tell you a bit about his connections to science and technology.

In his decades of service, Ted Hesburgh helped his university, the Catholic Church, the United States, and the people of the world navigate the rushing waters of change flowing though the Twentieth Century. Some of this change stemmed from science and technology, with which Father Ted was always willing to engage.

Those are just a few snapshots from a remarkable life. Father Ted was a friend of my parents when they were all at Notre Dame and Saint Mary’s College in the 1940s. Years later, I met him myself. For an important and busy guy, he was quite easygoing, and always seemed to have time for a friendly word with a student. I am fortunate to have known him.

(He had the misfortune to die on the same day as someone more famous, the actor Leonard Nimoy. On Google News, there are 71,000 hits on “Hesburgh” and 2,600,000 on “Nimoy.” Nevertheless I hope Father Ted manages to catch some of the attention he deserves.)