I was surfing around last month through some of the Vatican Observatory’s different on-line presences when I came upon some photos from the V.O.’s 1999 Summer School.  The two photos below especially caught my eye.  The woman wearing the yellow sash looked vaguely familiar.  And there was a caption that identified her as “Mercedes Richards”.  When I was in graduate school at the University of Virginia, one of the astronomers there was named Mercedes Richards.  Could this be the same person?  How many people named Mercedes Richards are going to be connected to the world of astronomy, anyway? 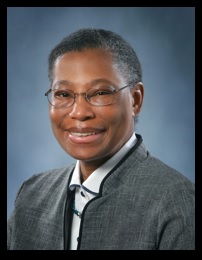 It turns out that the woman at the 1999 summer school was indeed the same Mercedes Richards who was the astronomer at the University of Virginia.  Regrettably, Richards passed away three years ago tomorrow.  Her obituary is available from several sources.  Most versions of the obituary specifically note her “fond memories” of her time “in 1999 at the Vatican Observatory in Castel Gandolfo”.  They also note that her memorial service was “held as a Memorial Meeting for Worship, in the Quaker tradition, to reflect Mercedes’ Quaker upbringing”.  I had only recently finished writing a post for The Catholic Astronomer on the Quaker astronomer Jocelyn Bell Burnell when I found the photos of Richards at the V.O., so it seemed appropriate to write a post about Richards, a Quaker astronomer who had fond memories of Castel Gandolfo.

I did not know Mercedes Richards personally, but she was someone I might say “hello” to in the hallways of the University of Virginia astronomy department.  She probably did not even know my name, as I was a lowly graduate student, and she was a busy new professor.  She was on the faculty at Virginia from the late 1980’s through the early 2000’s.  She then joined the faculty at Penn State, and was there for the rest of her career.  In an interview she gave for a profile that Penn State did on her in 2009, she described taking an interest in astronomy at an early age:

I made a decision ’round about 6th grade or so that I wanted to be an astronomer….  The stars in Jamaica [Richards was from Jamaica] are really, really beautiful.  My father and I would just sit outside and talk about life and philosophy under the canopy of the skies.  More than anything else I wanted to understand what was going on.  Why do stars shine?

Indeed, Richards’ area of research turned out to be stellar astronomy: she studied the interactions of binary stars—pairs of stars that orbit one another.  According to the Penn State profile, her father encouraged her interest in the natural world in other ways, too, such as taking her to a local botanical garden early in the morning:

In the early morning quiet, father and daughter sat in awe of the nature around them (“It was like being in a place of worship”), and her father taught her to identify the nuanced varieties of plant species.

The profile also reports that one of her friends at St. Hugh’s High School in Jamaica wrote in her school yearbook, “Mad Mercy!  Her ambition is to obtain a Ph.D. in Astronomy!”  Richards did obtain that doctorate in astronomy, and also got married and became the mother of two daughters.  Over the course of her career she was often honored for her work in astronomy.

She was also a person of active faith.  The May 2016 issue of Friendly Connections, the newsletter of the State College (Pennsylvania) Friends Meeting (Quakers) features a lengthy obituary that notes that—

Mercedes Richards was a Quaker presence….  A birthright Quaker, Mercedes did extensive social work as a member of the Friends Meetings in Kingston (Jamaica), Toronto (Canada), and Charlottesville [Virginia].  In Kingston, she and her family were regular visitors to the children’s hospitals, bringing clothes and meals and good cheer.  In Toronto, Mercedes was active in the Meeting’s First Day School, she served as Coordinator for three terms of the school curriculum, and she visited prisons in Ontario during her participation in the Meeting’s prison visitation program.  In Charlottesville, she served on the marriage guidance committee and other committees.  After the family moved to State College [Pennsylvania], Mercedes transferred her membership to State College Friends Meeting.  Mercedes was a regular attender at Meeting and a faithful contributor to the local food bank.

Jocelyn Bell Burnell and Mercedes Richards are enough that it would seem the Quakers have a knack for begetting astronomers!