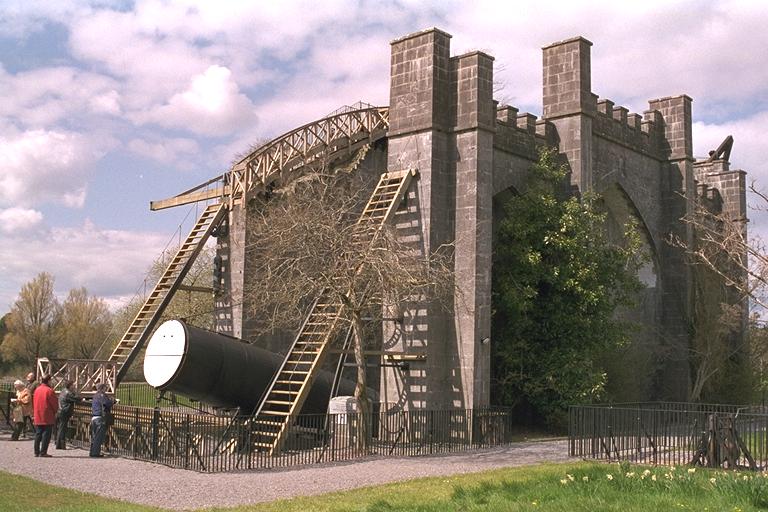 Lord Rosse’s Leviathan, for nearly a century the largest telescope in the world. This image is from the web page https://www.awesomestories.com/asset/view/Leviathan-of-Parsonstown//1

This column was first published in The Tablet in October, 2005; we first ran it here at The Catholic Astronomer in 2015

Standing in the lee of The Leviathan, a handful of amateur astronomers and their cool white telescopes huddled against the night Irish wind, praying for the skies to clear. We were attending the 20th Whirlpool Amateur Astronomy conference, held every autumn at the castle of Lord Rosse in Birr. Here in the 1840’s the Third Earl had built the world’s largest telescope: rightly called a leviathan, it boasted a mirror five feet in diameter set in a tube fifty feet long. With this giant he’d discovered the spiral arm structure in that galaxy off the handle of the Plough called The Whirlpool. (Actually it’s six feet in diameter, as I will discuss in a later post!)

The third Earl was a classic example of an amateur astronomer: one who did his work only for the love of the subject. He had no advanced degrees, and he did not earn his income from his astronomical labors (spending a good portion of his wife’s inheritance on his telescopes). But his work was groundbreaking, at the forefront of 19th century astronomical research.

What would you call the present generation of amateurs, represented at this year’s Whirlpool meeting? Nik Szymanek will happily sell you his book on how to photograph the nighttime sky. The images he showed that weekend, made with relatively inexpensive commercial cameras and amateur telescopes, rivals the best professional images of even ten years ago. But he has a day job back in London, driving a train on the District Line.

Later I met the Lincolnshire astronomer Paul Money, who derives part of his living by giving over 100 astronomy talks every year. He has a day job, too, selling retail for Marks and Spenser. On the other hand, at the Whirlpool I gave a presentation on my own book for amateurs, Turn Left at Orion; as a Jesuit I derive no personal income from my book, yet my day job is research at the Vatican Observatory. Which of us are the professionals, and which the amateurs?

Is the difference the amount of money we make, or our academic degrees, or the importance of our research? Sir Patrick Moore has produced little in the way of professional research, but his “amateur” books stoked the youthful ambitions of nearly every professional astronomer I know. Meanwhile, much of my research into asteroid structure is based on an analysis of asteroid shapes and spin rates; often as not, the data I use were originally taken by active amateurs working with the International Occultation Timing Association, or undergraduates at small universities making careful records of asteroid light curves.

The blurring of boundaries between amateur and professional is occurring more and more in different branches of science. Amateurs collect fossils and meteorites, volunteer at archaeological digs, track rare birds and butterflies. But the new availability of inexpensive detectors and computers has made this collaboration all the more striking in astronomy in recent years. Adding no small part is amount of self-education available on the internet, which also allows the easy ordering of highly specialized equipment and small-circulation books and magazines for the advanced amateur, and the free exchange of programs and data.

I see a parallel in the growth of lay organizations in the Church. Lay people in all fields are now organizing themselves, and speaking with confidence, on topics once deemed the realm of the clergy and theologians. And likewise, in some of these Church organizations, one hears echos of those individuals you find in every amateur astronomy club who are more passionate about UFOs and The Face on Mars than the details of stellar evolution. Self-acquired knowledge tends to be quirky, uneven, and prone to painful lacunae. Long-cherished misconceptions are hard to dislodge.

As the midnight skies above us in Ireland cleared, I did my bit to help some amateurs across a few gaps. Gently I steered their glorious home-built telescopes towards nebulae and galaxies new to their eyes. In the dark we each embraced these views of creation, gifts from the God Who is Love.

50  |  Across the Universe: Asking the right questions