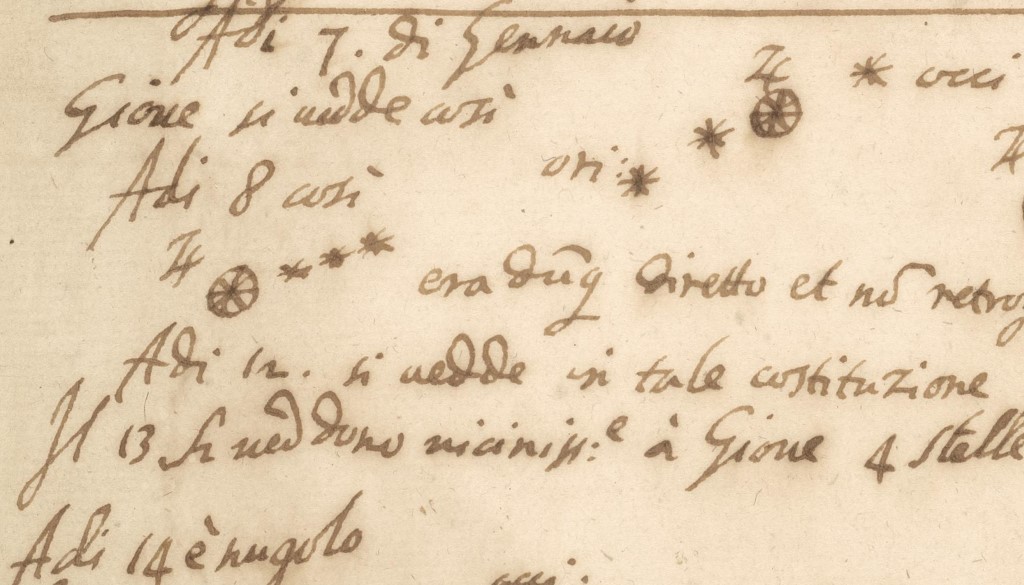 Today there is an interesting history of science article in the New York Times: “A Watermark, and ‘Spidey Sense,’ Unmask a Forged Galileo Treasure”.  It is all about a famous bit of Galileo’s notes, which included “the first observational data that showed objects orbiting a body other than the earth”—or so it was thought.  Now this work is thought to be a forgery.

Unfortunately, the article begins with this:

Galileo Galilei was peering through a new telescope in 1610 when he noticed something strange: several bright objects flickering around the planet Jupiter that seemed to change positions nightly. His discovery, of moons orbiting Jupiter, was a major crack in the notion, widely held since antiquity, that everything in the universe revolved around the Earth.

The finding, which was condemned by the Catholic Church, helped prove the theory of a sun-centered solar system.

Of course, Galileo’s discovery of moons orbiting Jupiter was not condemned by the Catholic Church.  In fact, as soon as Jesuit astronomers in Rome could get their hands on a good telescope, they confirmed his discovery.  Indeed, since confirmation by other scientists of new discoveries—especially scientists with solid reputations (like Fr. Christopher Clavius at Rome)—is an important part of any scientific breakthrough, arguably this finding received key confirmation by the Catholic Church.

I will not write at length about an organization as prominent as the New York Times publishing wrong information.  But in a world where people are constantly claiming that this or that outlet is spouting misinformation or disinformation, the Times is obligated to get this right.

A lesser complaint: the discovery of Jupiter’s moons was indeed a major crack in the notion, widely held since antiquity, that everything in the universe revolved around the Earth, but it did not help prove the theory of a sun-centered solar system.  Some astronomers at the time saw the moons as evidence in favor of the idea of epicycles, as they were proof of circles moving on circles.

An interesting side note: the article says that Cardinal Pietro Maffi had determined the sheet of notes to be authentic—by comparing it to other documents in Galileo’s hand (that, it turns out, Maffi had been given by a forger).  Maffi helped in 1906 to recruit Fr. George Hagen, S.J. to the Vatican Observatory—the observatory’s first Jesuit Director.  Maffi also helped recruit Sisters Emilia Ponzoni, Regina Colombo, Concetta Finardi, and Luigia Panceri, who worked as “computers” on the Carte du Ciel project.  Apparently the Cardinal was an astronomy enthusiast, and a better judge of people than of historical documents.

The forgery article appeared on the front page of the August 18 print edition of the Times, under the headline “Library Prized Its Galileo Artifact, but Scholar Spotted a Red Flag”.

That Church scientists confirmed Galileo’s discoveries, and that their confirmation helped convince others that Galileo was right, is not new knowledge.  The following is from Stillman Drake’s 1978 book Galileo at Work: His Scientific Biography (University of Chicago Press):

Among the first persons he [Galileo] visited [when he came to Rome in April 1611] was Christopher Clavius, still professor at the Roman College of the Jesuits though now very old.  Cardinal Bellarmine, always cautious, requested from the four mathematicians there (Clavius, Odo Maelcote, Christopher Grienberger, and G. P. Lembo) a formal report on Galileo’s claimed celestial discoveries.  All four signed a statement confirming Galileo’s findings….

During Galileo’s stay at Rome the Jesuits of the Collegio Romano paid him the unusual honor of a meeting at which Father Maelcote delivered an oration praising the Starry Messenger [Galileo’s 1610 book announcing the discovery of the Jovian moons]….

[Mark] Welser wrote to a friend that he had long resisted Galileo’s announcements, in agreement with the chief mathematicians of his acquaintance, but that all were now converted, in particular Father Clavius, who had so assured Welser of their truth that he no longer had any doubts.

Completely erroneous information was published on the front page of the New York Times.