I found something amazing in Florence.

I had no idea it was there, until the moment I found it.

Two years ago, I said goodbye to Brother Guy Consolmagno.  He’d accompanied me from Rome to Florence, Italy. We’d spent three days together touring the treasures of the legendary city, but now it was time for him to board a train back to Rome and return to the Vatican Observatory.

I was left alone with my Firenzecard. A Firenzecard costs 72 Euros and it grants access to over seventy museums around Firenze, that is, Florence.  It confers other privileges, such as a very short line at the fabulous Uffizi Gallery (I liked to pretend I was a visiting Medici cousin, getting special treatment), and free WiFi access in certain locations (not even the wealthy Medicis enjoyed WiFi!). 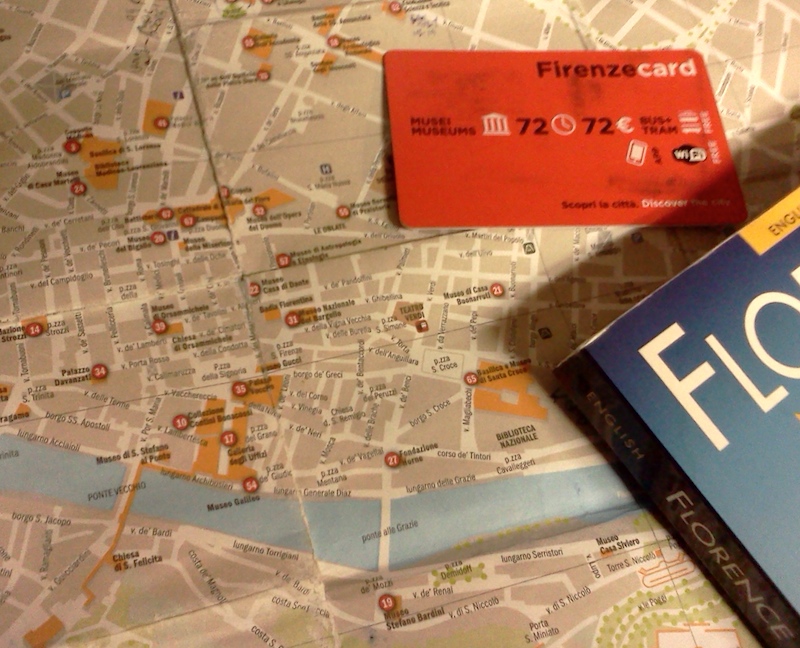 My Firenzecard and map led me to a hidden scientific wonder on my visit to Florence. Photo: William S. Higgins

A Firenzecard expires 72 hours after it’s purchased. Mine had one day left to run.  Florence still had many more museums to offer. What would I see next?

I unfolded my well-creased map of Florentine museums. Most of these institutions are devoted to art or history. We’d already visited Museo Galileo, the city’s major science museum.

I spotted an intriguing name: Fondazione Scienza e Tecnica, Foundation for Science and Technics. It was on Via Giusti, a few blocks from the spot where I stood. I began walking in that direction.

I presented my Firenzecard, entered the museum, and began to look around.  Although it was in a large building, the exhibit space occupied only a small number of rooms. A few display cases held mineral specimens, and plants, and animals.  Signs indicated that these were merely samples from a larger collections, not on display.  At first I shared the hall with a flock of children. Docents soon herded them into a couple of classrooms for a lesson in hands-on science.

I struck up a conversation with a staff member at the admission counter. She was studying for a degree in museum curation.

I do not know what she noticed about me that made her decide to ask the next question.

What was the Special Collection? Instruments for teaching physics, she informed me.

That sounded right up my alley.  Yes, please!

She led me to a door along the hallway and produced a key.  We stepped through the door.  That’s when I first gazed upon the Cabinet of Physics.

All around us, behind glass, were shelf after shelf of antique devices.  Working models of gear-trains and linkages, for the benefit of young mechanical engineers.  Models of dams and locks for civil engineers.  Moving further inward, new rooms revealed themselves.  Barometers and thermometers.  Pendulums and pulleys. Rows and rows of electrical apparatus.  Everywhere, brass, varnished wood, glass and copper. All handmade in the styles of a bygone century.

My guide explained that the instruments and demonstrations had been collected over a long period by earlier institutions in Tuscany, and had eventually come into the care of the Foundation. She asked me not to take photographs, and handed me a laminated set of maps that offered some explanation in English. Then she left me alone with the fabulous collection. Guess I must have a trustworthy face.

I wandered through the rooms for a long time. I saw apparatus for optics, for acoustics, for hydraulics, for thermodynamics, for electrostatics. Many devices came from far away; their nameplates read London, or Paris, or Berlin.

Some devices I recognized, but many more I didn’t. I did spot a phenakistoscope, a mechanical device for viewing  animated scenes—a 19th-century precursor to movies. I also saw Wimshurst machines and similar rotating devices for creating high-voltage electicity.

It was an unexpected joy to discover the Cabinet of Physics, and to examine the beautiful work of so many bygone scientific craftsmen.  After I’d drunk my fill, I closed the door behind me and went to thank my hostess.

Apparently, people can somehow tell by looking at me that I am someone who ought to be shown the Special Collection.  Not every visitor is this fortunate.

Later I learned that, although these rare devices are locked away, the Fondazione has a plan to share them with the world.  But that is a story for tomorrow.

More Posts in this Series:
"From the Cabinet of Physics"

20  |  From the Cabinet of Physics: Using a Single-Prism Spectroscope

21  |  From the Cabinet of Physics: A Machine for Falling