“Christmas on the Moon” is an episode of Men into Space, a relatively intelligent science fiction TV series.  It aired on 23 December 1959 on the CBS network in the U.S.  Now it can be seen on Youtube.

Imagining a space program in the near future, Men into Space followed Colonel Edward McCauley (actor William Lundigan) and his Air Force colleagues as they flew to the Moon, constructed space stations, and explored asteroids.  This episode begins with astronomy, as a visiting comet expert (played by the ubiquitous Whit Bissell) joins the military astronauts at Christmastime to study a passing comet from a remote lunar outpost.  Unexpected peril crops up, but the comet itself holds a key to resolving the trouble.

I’m always intrigued when filmmakers attempt to put fairly accurate science into a science fiction story.  I’ve only seen a couple of episodes of Men into Space, but the short-lived series seems to have made an earnest attempt to combine science and storytelling to a level not just rare for 1959 television, but rare for TV in any subsequent era.  I hope to see more episodes. 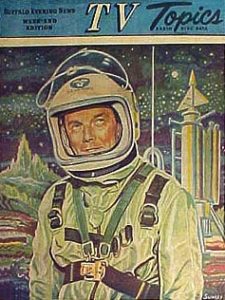 The science here isn’t perfectly accurate, but it’s pretty good.  We are told of speculations regarding the composition of comets.  We see an increased hazard (somewhat exaggerated) from meteoric debris traveling in orbits near the comet’s orbit.

The characters even argue about theology a bit!

The story may be a trifle corny by today’s standards but hey, it’s from the Fifties.  Just two years had passed since Sputnik surprised everyone.  The future of spaceflight was unclear, but appeared to be exciting.

Consider this a Christmas card, exactly 55 years in transit, from the inhabitants of Televisionland to us.