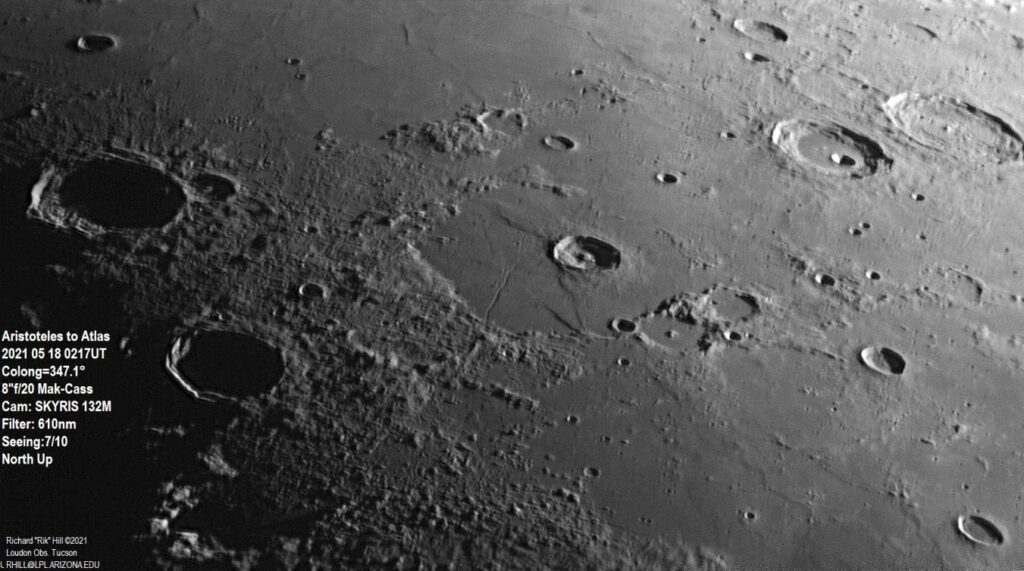 Such a magnificent expanse when the moon is just past six days old. Starting from the upper left and going down we have the small crater Galle (22km dia.) at the top edge with the monster Aristoteles (90km) just coming into the sunlight with little Mitchell (31km) on its sunward side (east). Going further south we come to Eudoxus (70km). Now below Eudoxus is an area with ragged boundaries. This is the crater Alexander (85km) a very old, very eroded non-round crater dating back possibly over 4 billion years! Just right of the center of this image is the crater Burg (41km) sitting in the middle of the hexagonal mare Lacus Mortis (Lake of Death). Notice the 4 or 5 rimae roughly radiating from Burg to the outer wall of the Lacus. They are not all the same morphology and the better resolution you apply the more interesting they get. The twin craters to the south of Burg are Plana (46km) to the left and Mason (44km) to the right. South of them in the flat area that is Lacus Somniorum is a little bump that is Mason 1 dome. Further to the south is a relatively young crater Grove (29km) and in the corner of the image is Danielle (31km).

At the top of this image in the upper right corner are twin large craters, Hercules (71km) with the smaller Hercules A (13km) on its floor and next to it is Atlas with its system of rimae on its floor. So much going on inside this crater that can be studied at a better libration. One last crater is Keldysh (34km) above these two bigger craters. This whole region offers so much early in every lunation.