Along with my regular Tablet columns I am asked on occasion to write other articles for them. This one was run in August, 2005, just before the annual World Science Fiction Convention that was held that year in Glasgow. It ran again here at The Catholic Astronomer in 2015. This year, the Worldcon will be held August 16-20 in San Jose. I’ll be there, too. 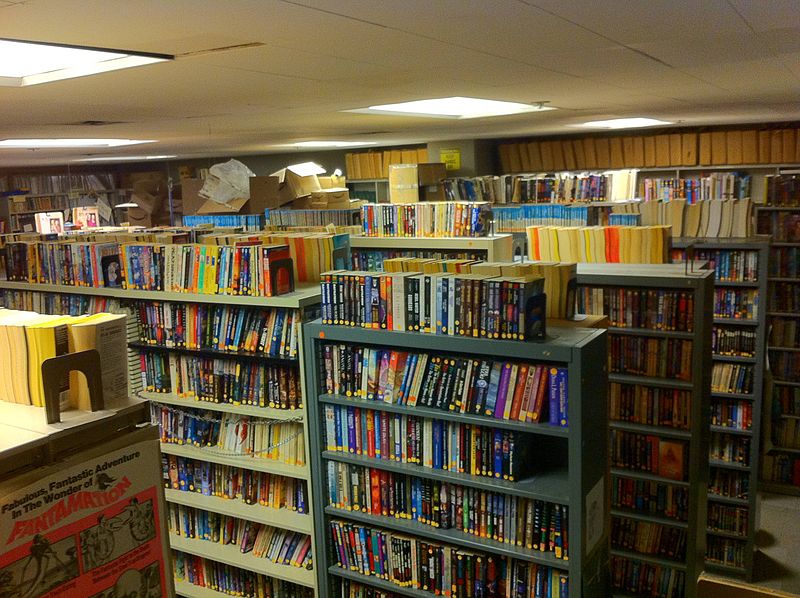 The MIT Science Fiction Library is a big part of why I transferred to MIT… and became a scientist in the process.

When I was an undergraduate at the Massachusetts Institute of Technology (MIT) I belonged to the Science Fiction Society, the “MITSFS”. We had a motto: “We’re not Fans, we just read the stuff.” There was an element of self-parody, of course; if we weren’t fans, why would we pay our dues to belong to a club of “misfits”? (Because the club had a room full of books – some 30,000 SF novels and related material – and comfy chairs, a welcome hideaway on campus.)

But the motto also recognized an uncomfortable truth. Even at MIT, science fiction and its Fans had an unsavory reputation: pimply teenagers who sought escape from their miserable lives into a world of impossible make-believe. The truth was bad enough. We were, indeed, teenagers; and worse, engineering/science geeks-in-training. Who wanted to be lumped with people who talked through their noses and wore pocket protectors, if not Vulcan ears?

Among the 4,000 attendees at the annual World Science Fiction Convention, [held in 2005 in Glasgow from 4 – 8 August, 2005] I am confident that one can find a full quota of squeaky voices and Vulcan ears… every one of them well documented by journalists come to mock the geeks. Is that all they’ll see?

Indeed, I am attending this convention in part as a journalist. I’m working on a Radio 4 program about extraterrestrial life; after interviewing a number of scientists, we’re now talking to science fiction fans and authors. Some might say that, since no life outside Earth has yet been found, astrobiology is itself nothing but science fiction. My suspicion is that, since they’ve been thinking about aliens for eighty years, the science fiction community has turned this speculation into a science.

I am also serving on half a dozen panels, ranging from “What’s New in Astronomy” (lots!) to “The Dead God in Science Fiction and Fantasy” (they never seem to stay dead…) 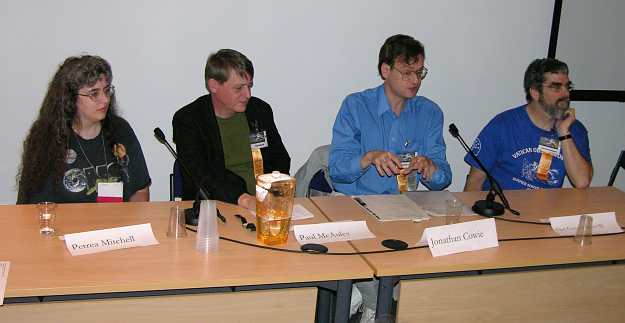 This panel, on Science Denial, at Glasgow featured Petrea Mitchell, Paul McAuley, Johnathan Cowie, and me

Science programming is a popular part of most SF conventions. A special guest [in 2005 was] David Southwood, the European Space Agency Science Director. Fans are a ready-made audience eager to hear about the latest discoveries in biology or space exploration. It helps that so many of the attendees are, like my fellow MITSFS members, themselves scientists and engineers inspired to their vocations by the science fiction they read as teenagers. Among the friends I’m seeing again at this convention are Dermot Dobson, an engineer whose latest gizmos help doctors and researchers see inside patients at the Oxford Radcliffe Hospitals; and Barry Gehm, whose work on oxidants at Northwestern University showed the health benefits of tea and red wine.

My Jesuit and Vatican hats get worn at this convention, too. For fans (and writers) curious about comparing their fantasies with The Real Thing, one panel has put me alongside representatives from the military, the government, and academia to describe what it is actually like “Living in Old Structures.” (This life does feel, at times, like living inside a fantasy novel. Indeed, my home in Castel Gandolfo at the Vatican Observatory has been marvelously misconstrued in The DaVinci Code.)

In fact the heart of science fiction is found in this overlap between intellectual knowledge and real life. SF takes the world we live in, deliberately changes one or two key truths, and then explores that “what if” by following rigorously the storyteller’s logic to see how a protagonist’s life is defined as a result. By seeing what might be, we come to appreciate what is.

Ultimately, SF is not about spaceships or bug-eyed monsters; it is about human beings. What does it mean to be human? How better to explore that question than to ask: human, as compared to what? Thus our stories are populated with aliens, clones, cyborgs, sentient computers. From the simplest space-opera, to the indescribable complexity of stories like Gene Wolfe’s The Fifth Head of Cerberus or Philip K. Dick’s Do Androids Dream of Electric Sheep (aka the movie Bladerunner), these stories explore how almost-humans interact with human protagonists, and define the essence of both.

Most importantly of all, they are stories. Just as the ancients taught with myths, and Jesus taught in parables, storytelling makes ideas accessible, memorable, and testable. Flaws in philosophy (or science) can be subtle and hard to spot; but no storyteller can get away for long with a plot and characters that don’t ring true to our own experience.

And so one even – or especially – finds truth and hope in dystopias. The notoriously anti-technology, anti-religious Philip Pullman fantasy series His Dark Materials depicts a universe where no one is good, and God is corrupt and dying: a sly, sneering Narnia for atheists. But Pullman’s quality as a storyteller overcomes his philosophical agenda. Its hollow, unhappy ending is indeed the inevitable outcome of his world-view; any Hollywood resolution would ring false.

Indeed, the best Catholic science fiction and fantasy writers (like Wolfe, or J. R. R. Tolkein) rarely express their Catholicism overtly. One of Wolfe’s main heros is a pagan priest; and Tolkein’s exhaustively constructed Hobbit universe has, curiously, no religion. But both authors build their works on the essential Catholic theme of redemption from sin. Likewise, Orson Scott Card has used the mythos of his Mormon religion subtly but to good effect in his constructed universes, and Christian themes can be seen not too far below the surface in many other prominent writers, from Cordwainer Smith (Paul Linebarger) to Connie Willis.

But even space opera today explores deeper issues than mere adventure. The rollicking tales of Lois McMaster Bujold are pure space opera; but they also involve serious what-if speculations on the social effects of possibilities ranging from corporate militarism to uterine replicators. Hers are musings, not diatribes; none of her opinions are so set in stone that she won’t illustrate an opposite point of view. And her stories are page-turners.

Indeed, for all its vaunted success in predicting technology, the most profound insights in science fiction may be its illustrating the social consequences of technology. Few descriptions of today’s multi-national corporations are as chilling, or accurate, as John Brunner’s Stand on Zanzibar – published in 1968. Contemporary issues of privacy, identity, and political revolution in a wired world were thoroughly explored in Poul Anderson’s Sam Hall – published in 1953. For a lesson on how not to confront terrorism, our politicians should read Eric Frank Russell’s short novel Wasp – published in 1957.

If science fiction fans have a reputation for brusk social manners, it may simply be born of their frustration with a world that’s decades behind them. At its best, science fiction leads to a deeper understanding of technology, society, and the fears and dreams of being human.

My biggest thrill at that convention was meeting Terry Pratchett, the best selling author of the Discworld series, who sadly died 2015. He showed up with a copy of one of my books, for me to autograph for him!