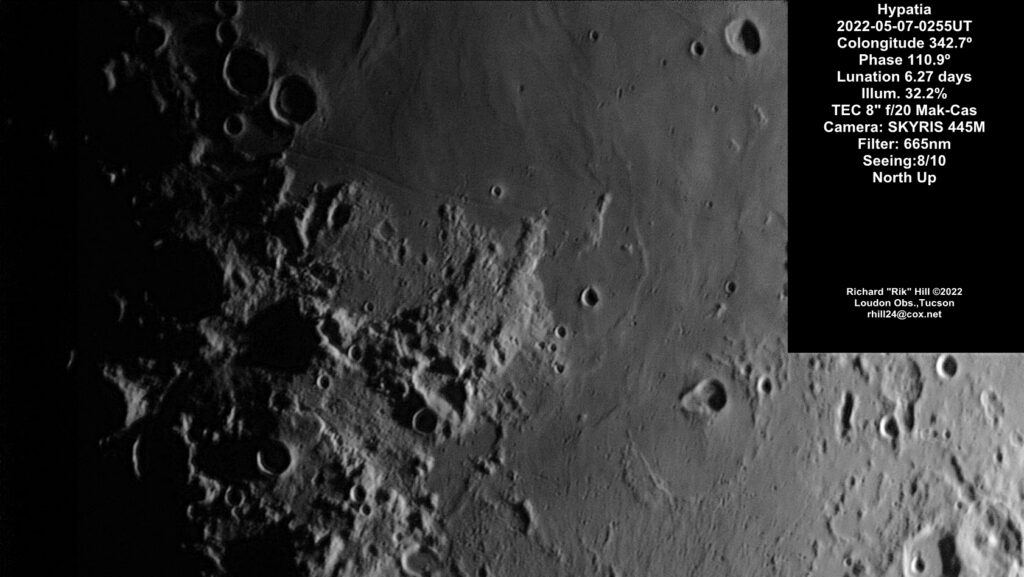 North of Theophilus is Sinus Asperitatis a flat region at the bottom of this image that contains the interesting pear-shaped crater Torricelli (23x31km) below and right of center. This crater has been a favorite of mine for many years sitting as it does on the north side of a much larger ghost crater some 75km diameter. It is the merging of at least 2 craters of Imbrium age (3.2-3.8 billion years old) filled with ejecta from surrounding impacts. On the opposite side (left) of the Sinus is another odd shaped crater that points more or less south. This is Hypatia (28x41km) also of Imbrian age, also overlain by ejecta materials. Notice the sideways “V” shaped shaft of light from sunlight streaming in through the break in the western wall. It’s fun to watch these kind of light shows as they change rapidly with time.

North of this region is Mare Tranquillitatis and the site of the Apollo 11 Base. Two large craters on the left side of this are Sabine (31km) south and Ritter (32km) north. They make it easy to find the “Tranquility Base”. Between these two craters and Torricelli is the small crater Moltke (7km) and between Moltke and Sabine is a large system of rilles named Rimae Hypatia. These are not the thin cracks like the Triesnecker rimae, but rather are grabens where a block of land drops down between two roughly parallel faults. In this case we have two such grabens parallel to each other. Then in the upper right corner, near the label, is the crater Maskelyne (26km) another odd chaped crater but younger than most of the other craters we have pointed out, being of Eratosthenian age (1.1-3.2 b.y.o.) and so this one is not filled in by ejecta like the much older craters.

This is a wonderful region with a lot more going on. Enjoy it for yourself when the moon is about 6.3 days old!