This is a “re-run” of a post that originally ran in March.  At that time it was a “members only” post.
Today marks one year since Nature published its article on Galileo’s letter,
so I am re-running the post “open to all”.

In January I ran a post here at The Catholic Astronomer about the newly-discovered letter that Galileo wrote and (according to the journal Nature) lied about—click here for that post.  The Nature articles concerning Galileo’s letter were “news” or “opinion” articles, written by Nature’s editors and correspondents.  They were not research papers written by the scholars who found the letter: Michele Camerota of the Università degli Studi di Cagliari, and Franco Giudice and Salvatore Ricciardo of Università degli Studi di Bergamo.  Now a scholarly, peer-reviewed paper, written by those scholars regarding the letter, has been published, and so I thought I’d follow up with a little analysis.

The paper, titled “The reappearance of Galileo’s original Letter to Benedetto Castelli”, appears in the February 6, 2019 issue (volume 73, issue 1) of Notes and Records: The Royal Society Journal of the History of Science.  It is available on-line, and is written in a readable manner, so all who are interested can read it for themselves—just click here.

I know little about handwriting analysis, but Camerota, Giudice, and Ricciardo certainly convinced me that the newly-discovered letter was indeed written by Galileo.  A comparison between the date written in the newly-discovered letter, and the dates written in other letters that Galileo wrote, was enough to do that.  (The various samples of Galileo’s handwriting that Camerota, Giudice, and Ricciardo provide are also enough to convince me that handwriting was not a highly-valued skill in Italy in the early seventeenth century.)  And one of the things that I find most interesting about the paper is that Camerota, Giudice, and Ricciardo report that the wording of the handwritten letter “corresponds exactly to the text sent by [Dominican friar Nicolò] Lorini to Cardinal Sfondrati in Rome” in 1615, and that the Vatican still has today. 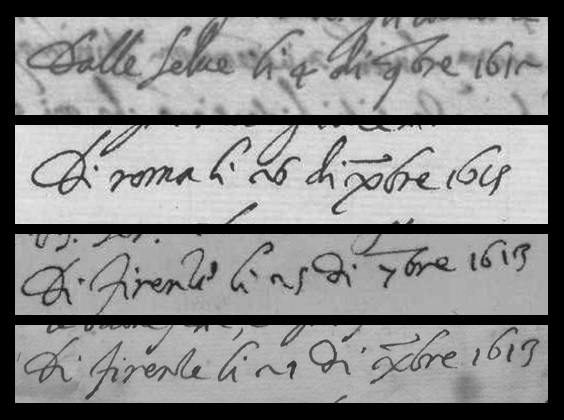 But I also have a complaint about the paper.  I think it conveys one certain impression that is not accurate.  Camerota, Giudice, and Ricciardo talk about Galileo’s “intricate relations with the Roman Catholic Church in these years”, and mention theologians and Aristotelian philosophers.  But Galileo wrote this letter to address issues raised by Christina of Lorraine, the mother of the Grand Duke of Tuscany.  Galileo states this explicitly in the letter (click here for a translation of the version of the letter as later altered by Galileo).  Yes, some figures within the Church had been looking to cause trouble for Galileo regarding his views on astronomy—Lorini had accosted Galileo in November of 1612, and a year before that a friend had written to Galileo warning him that a group was meeting at the home of the archbishop of Florence and plotting against him—so Christina’s issues no doubt echoed the thoughts of others.  But it seems to me that the fact that Galileo wrote this letter in response to ideas expressed by the Grand Duchess Christina of Lorraine ought to show up somewhere in all that has been written about this letter.

It ought to show up because it is worthwhile to convey correct information.  And, it seems to me also worthwhile to know that a powerful and intelligent woman, whose opinion obviously carried weight with Galileo, played a role in all this.  She—not some bishop or cardinal, nor some Jesuit scholar, nor some Dominican preacher—was the one who got Galileo’s dander up and prompted him to say stuff that he obviously came to regret saying (and then tried to hide by altering his letter).  But so far I have seen no mention of the Grand Duchess in any of the discussions, either in the Notes and Records paper or in Nature or in the various articles written as spin-offs from Nature’s report of the newly-discovered letter.  From what has been written about it, you might think that Galileo wrote the letter in response to someone in the official apparatus of the Church.

If you find the above images interesting, seek out a full copy of the paper (a university library is your best bet).