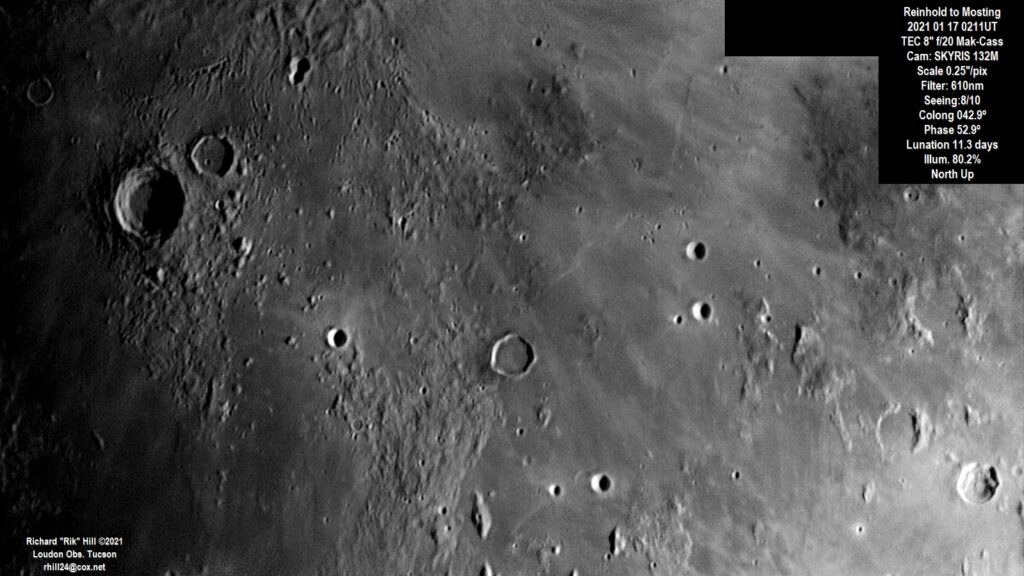 This overlooked region is southeast of the great crater Copernicus. On the left side of the image is the beautifully terraced crater Reinhold (diam. 49km). Just above and right of Reinhold is the ring crater Reinhold (24km) and further on the smaller twin craters Fauth (12km) and below it Fauth A (8km). Normally I wouldn’t bother with craters of this size but these two figured prominently in the foreground of the famous New York Times “Picture of the Century” on Nov.24, 1966. A restored copy of that Lunar Orbiter 2 image can be seen at donaldedavis.com/2004%20new/COPERNho.gif. I looked these craters up right away in 1966 when I first saw the Orbiter image.

Dead center in this image is another very old ghost or ring crater Gambart (26km) of Pre-Imbrian age (3.85-4.55 billion years old) flooded with ejecta from the many large nearby impacts. Then on the right edge of this image is the crater Mosting (27km) with Sommering (29km) the ghost crater just to the left of it the same age as Gambart as the flooding might indicate. Above these two is the ruined crater Schroter (35km) Between and above a line between Sommering and Gambart and are two vertically aligned relatively recent craters of similar size. The uppper is Gambart C (12km) and below it is Gambart B (11.5km). Between them and just to the left you can just make out 2 of the Domes Gambart, the left one sporting a nice central pit. Another dome can be seen south of Gambart itself by first spotting the small clear crater, Gambart N (5 km) well seen in this image. Below and to the left is a slightly brighter portion of the mare and you may see the small pit there in the center of the bright region in its own dark patch. This is Gambart 1. Look and the curious mountain further south and left. It’s has a crater in its summit but it is not volcanic. There are a number of such features on the Moon.

Before leaving this region, be sure to enjoy the hummocky terrain to the southeast of Reinhold. Then above Reinhold you can see a lot of the ejecta and secondary cratering from Copernicus. This is very interesting when on the terminator.