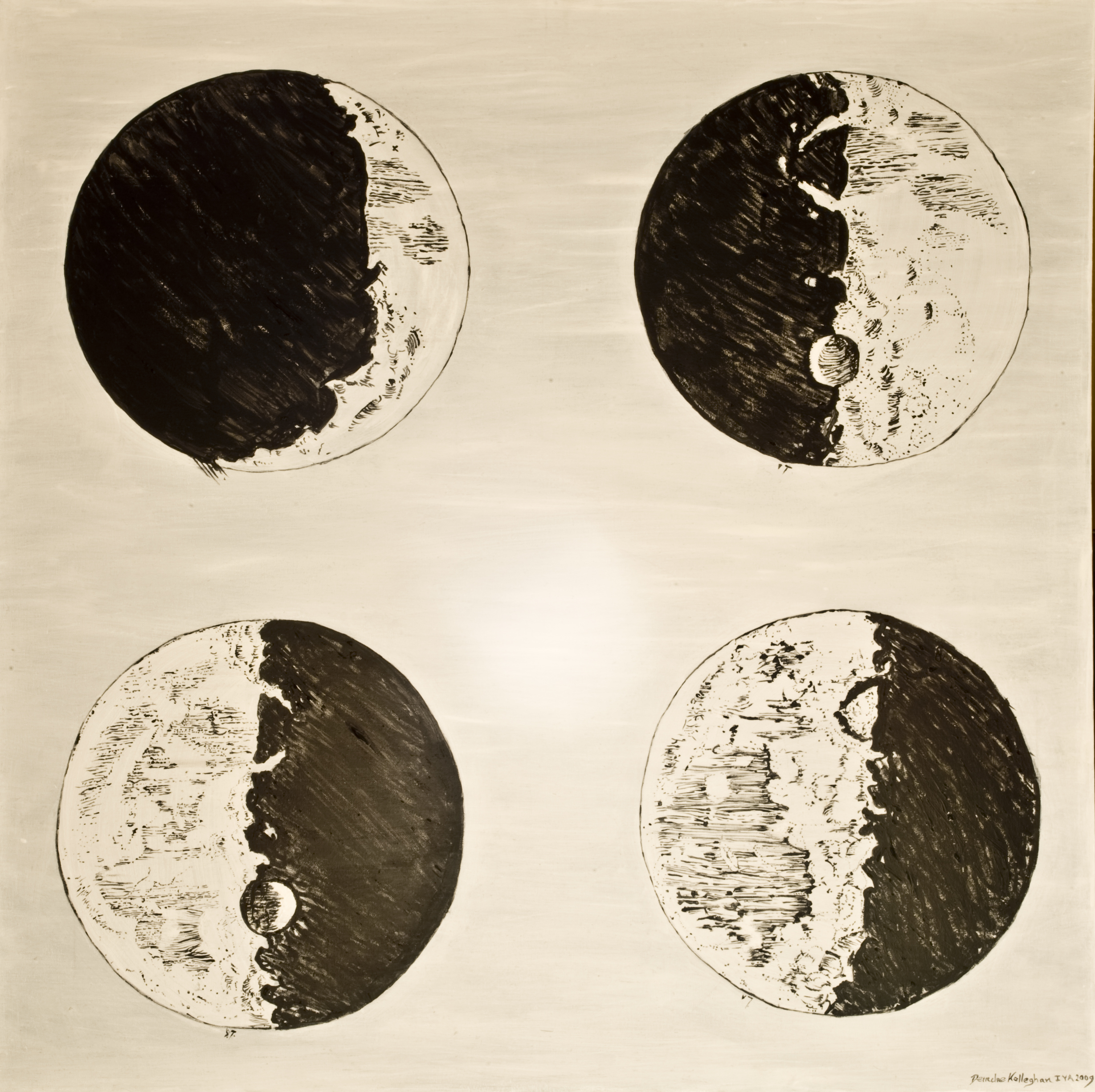 ‘At conjunction the moon occupies a position between the sun and the earth; it is then illuminated by the sun’s rays on the side which is turned away from the earth. The other hemisphere, which faces the earth, is covered with darkness; hence the moon does not illuminate the surface of the earth at all. Next departing gradually from the sun, the moon comes to be lighted partly upon the side it turns toward us, and its whitish horns, still very thin, illuminate the earth with a faint light. The sun’s illumination of the moon increasing now as the moon approaches first quarter, a reflection of that light to the earth also increases. Soon the splendour on the moon extends to a semicircle, and our nights grow brighter; at length the entire visible face of the moon is irradiated by the suns resplendent rays, and at full moon the whole surface of the earth shines in a flood of moon light. Now the moon, waning, sends us her beams more weakly, and the earth is less strongly lighted; at length the moon returns to conjunction with the sun, and black night covers the earth.”

This paragraph is an extract from Sidereus Nuncius (The Starry Messenger) 1610 by Galileo Galilei translation by Stillman Drake from the book Discoveries and Opinions of Galileo.

Now there ye have it, direct and clear from the master Galileo. Read it slowly, imagine it, and animate it in your mind. Observe the moon for yourself, spend time with its wonderful phases,  soon you will understand its movements.

Galileo was a great man for sharing the moon through his telescope. He shared the lunar surface with other scientists, princes, students, the pope, and artists. Galileo was compelled to share it as it was such a magnificent sight even in his small telescope.  Starry Messenger was written to share his drawings and observations of our satellite, far and wide.

Galileo’s  writing pulls you in to be part of his exploration. He thereby transports his readers to share his thoughts as he figures out the lunar surface, phases and features observed over 400 years ago. Today you can still find freshness pouring from his enquiring mind in his descriptive writing.

During 2009 I decided to paint Galileo’s  phase drawings from Sidereus Nuncius. Bringing his small sketches to a 3X3 foot canvas was a bit of a task.  However, the exercise gave me an insight into his view in a tiny telescope and his observational skill transcribing those views into drawings. On my canvas, the moon phases are each 13 inches in diameter whereas Galileo’s sketches were about 2 inches.

Sharing the moon with the public is an affliction borne with large smiles by many astronomers all over this planet. It’s amazing that there are so many people today that have never had an up close, personal view of lunar features in a telescope. International Observe the Moon Night    is an invitation to astronomers to show lunar detail to people on October 28th, 2017. This is a global event, with an increasing bubble of participants. I have taken part several times, it is tremendous fun to share the topography with people passing by. Back in 2012 the children in my astronomy club took part and were proud to share their knowledge of the subject on the seafront in Bray Co Wicklow. 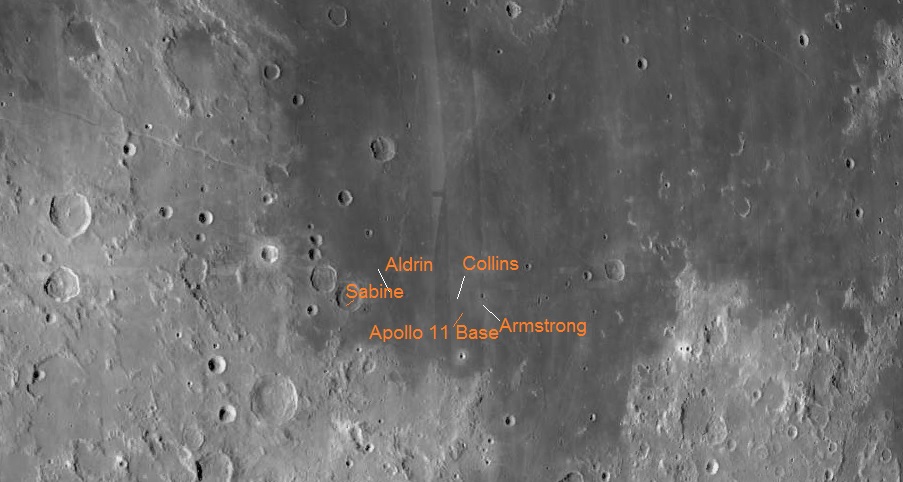 A section of the moon showing Mare Tranquillitatis ( the Sea of Tranquility) The map shows the craters Armstong Aldrin and Collins close to crater Sabine. The map comes from the free software Virtual Moon Atlas

The moon is a constant in our existence; our eyes are drawn by its beauty to look up at it from all over the planet. Galileo made sense of it for us, at great risk to his freedom. Neil Armstrong and Buzz Aldrin lifted the entire planet by landing on it for the first time back in 1969. On October 28th you can easily pick out the Sea of Tranquillity with your eyes. But why wait till October check out Tranquillity before that.  Even with your eyeballs, it’s an easy observation to make.   Better again in binoculars and still better in a telescope. A 200 mm reflector minimum size telescope should show you at least crater Armstrong about 5 km in diameter, crater Aldrin (3km) and crater Collins (3km). You should have no problem finding the area where the Apollo 11 LEM landed close to crater Sabine. Use the free software Virtual Moon Atlas to help you ID the features in this area of Mare Tranquillitatis.