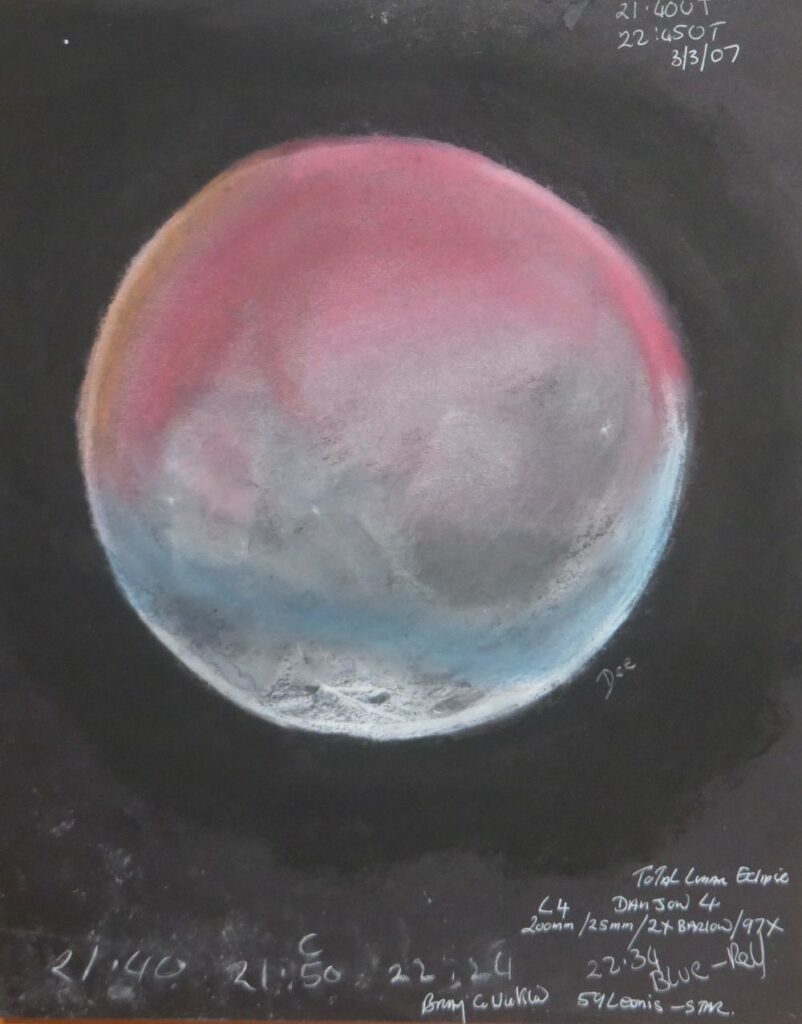 “Learning is experience. Everything else is just information.” Albert Einstein

On January 31st 2018 some of you will be lucky enough to be able to observe a total lunar eclipse. It is not visible from my location in Ireland. However  it is a very special visual occurrence. Therefore  I would like to share my experience of a total lunar eclipse.  On March 3rd / 4th 2007 I observed and drew this phenomenon, between the hours of 21:40 UT March 3rd  and 00:35 UT March 4th.

You can of course observe a lunar eclipse with your eyes alone and enjoy the experience. However  much to my surprise, observing the shadow of the Earth with my telescope as it  glided over the lunar surface was unexpectedly  rich and colourful.

Check out  where you can see the Total Lunar Eclipse

If you are going to try a drawing , you now have time to get yourself some soft pastels and black paper, and something to lean on.  I use a wooden field easel but you could use a clip board. Also you will need a comfortable seat, I use an adjustable stool. You even have time to practice drawing the moon so you can get a feel for it. Do not be daunted by the detail involved just do what you can to capture whatever  you are able to. You will be pleased with your efforts no matter what they are because you will have learned by that engagement.

March 3rd 2007 – my experience of a Total Lunar Eclipse

To say I was lucky to observe a total lunar eclipse is an understatement. The sky was clear for the most part. Clear skies are  an uncommon sight in Ireland.

I was delayed setting up my telescope for X,Y,and Z reasons. In an ideal world I would have had the entire lunar disc sketched in with detail before the earthly shadow entered this drama. The delay, fast – actioned my sketching in defence of the advancing shadow, and the movement of the moon.

When I began to sketch at 21:40UT the ominous dark shadow was descending on the Tycho area. I decided quickly to sketch from the North ( bottom of the page)  up (south is up for me) I realised that my usual etching method with a wooden toothpick was going to be too slow for this sketch and decided on pencil over pastel for speed.

Firstly I detailed the lunar maria as much as I could give prominent bright craters like Proclus, Plinius and Kepler some white attention. I suspected they might be still visible under the shadowy blanket, despite whatever colour developed. I put a lot of detail into Plato as it was outstanding in shape and contrast. Unfortunately, I did not stop to take an image at this point, as the action was already underway.

21:50UT the shadow was heading to gobble up my Copernicus before I could sketch it.
22:24UT Proclus was in grave danger of being swallowed whole.

By 22:34UT a fabulous blue leading wave developed and swept up the curve of the moon to merge with the increasing raspberry tones developing toward the south.

At 22:34UT when the colour began to appear, I had to run inside for red pastels. Never expected it to be so red.
Earlier that day I was thinking how would I do this colour overlay? I laid down some grey and tried out brushing it over with some red grated pastel but this was not so good.

Fingers were the only thing for it.  I worked quickly in red tones until I saw to both my delight and excitement a blue wave appearing across the entire width of the lunar disc.

Fingers then  red, big wipe, fingers then blue. The blue is due to ozone in the Earth’s stratosphere.

You can read more details about this atmospheric effect here.

In my haste and excitement of blueing the moon I wiped out Plato as my blue fingers joined the shadow and began moving up with it, oh god !! Stop or there will be no moon detail left. I observed that the blue edges wrapped the moon in a curve to both sides, like a gas flame burning up my surface detail. The view was all very exciting for me.

Meanwhile a yellow-orange glow developed at the South East limb, big wipe, yellow fingers. Ended up with just Goldschmidt, Barrow, and I think Philolaus left at the northern end of the moon. They were just about untouched at that moment. A criss-cross ray ejecta feature was visible also. The star 59 Leonis was also sketched in off the SE limb as I observed.  Remember when looking at the sketches that south is up. I was using a dob reflector which shows an inverted view. 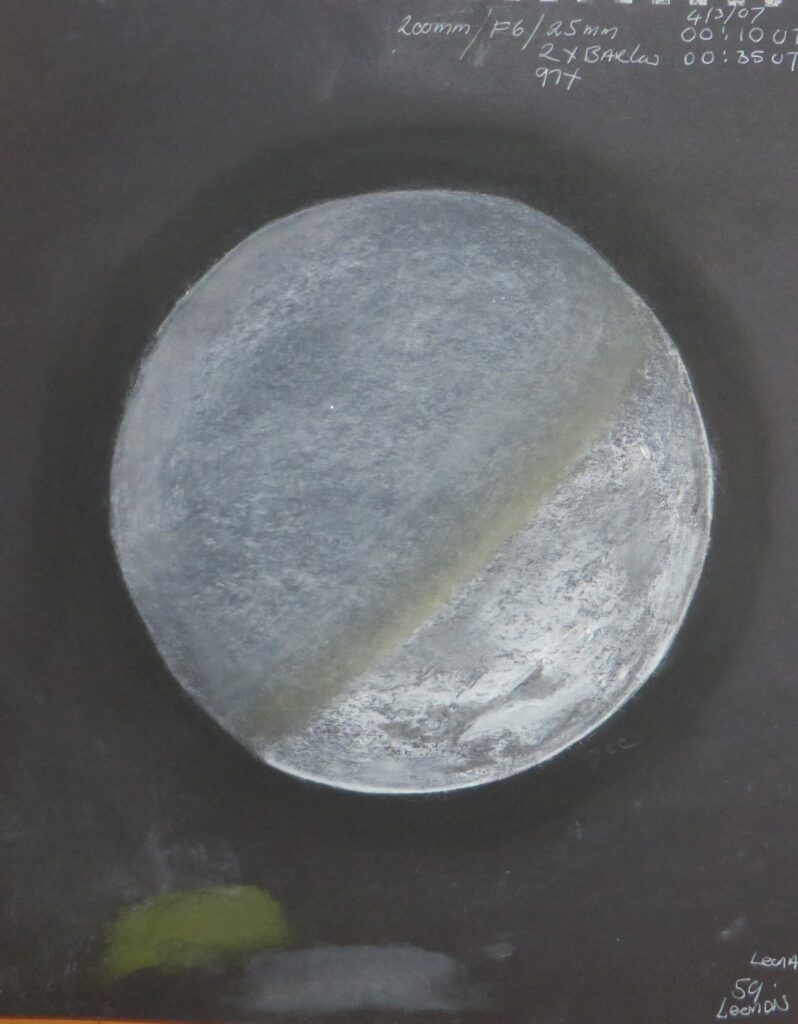 I waited to see what the emerging moon would look like as it exited the shadow of the Earth . I started a second sketch at 00:10UT ending at 00:35UT due to a hazy atmosphere. Not much detail was available but I did observe that the retreating shadow had a distinctive green grey edge and reckoned that was worth recording in the sketch. You can see the green pastel rubbed into the page above. My method is to rub the pastel into the paper then rub my finger in that to use in the sketch.

Good luck to all