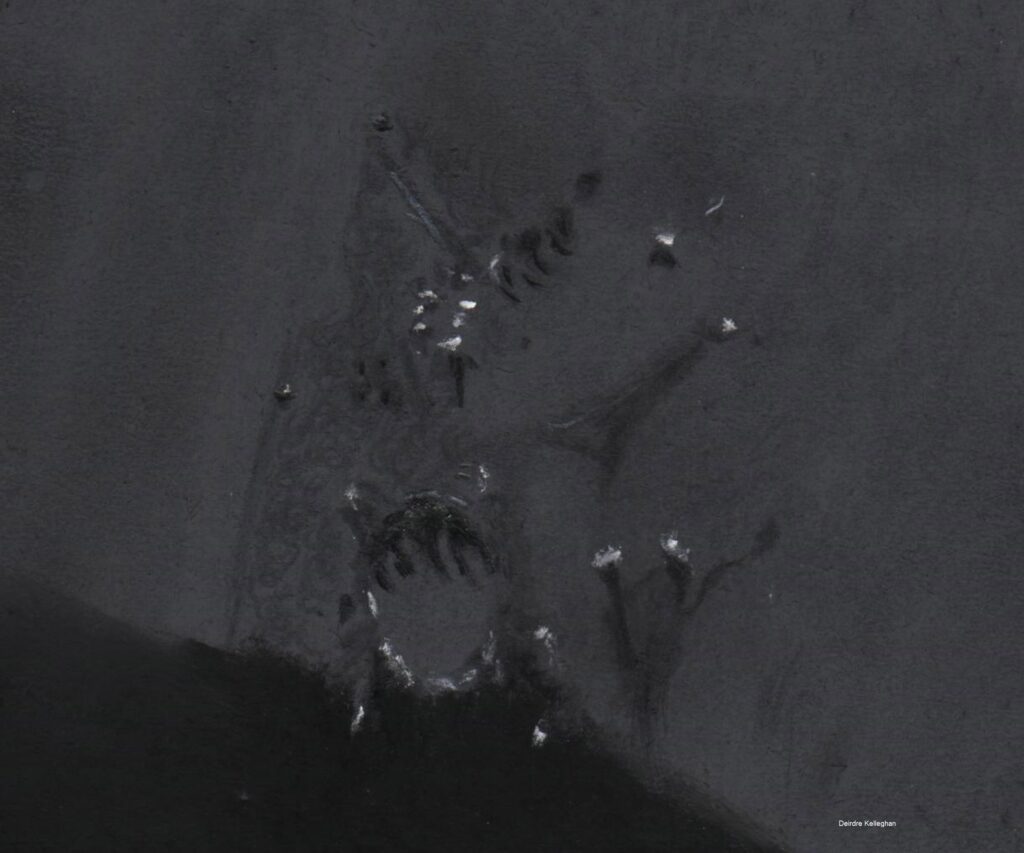 In my previous blog I mentioned that I had sketched Plato in detail. However in my haste to sketch the lunar eclipse I had wiped it out by overlaying it with red pastel . While writing I remembered another detailed sketch of Plato which was not compromised by a lunar eclipse. It would be my wish that you would go observe Plato and perhaps draw it.

This particular version of Plato was sketched back in February 2007 , on an evening when the seeing was perfect. Sometimes our atmosphere can be very unsteady.  Observing the moon when this is happening makes the view very wobbly, therefore not conducive to sketching. When the seeing is steady, moon viewing can be very beautiful. Occasionally the sun’s light can become a momentary master sculptor of lunar features as it touches the tops of mountains or the rims of craters.

‘The purpose of education is to give to the body and to the soul all the beauty and all the perfection of which they are capable.’  Plato

When I looked outside that Sunday evening there wasn’t a cloud in the sky. The eight day moon was shining down on me from a very favourable angle. There were  many desirable sketches available. My eyes darted from Rupes Recta toward the south, to Eratosthenes and the shadows and highlands spinning off it. Then further north to Plato sitting almost in the darkness of the terminator. It was a difficult choice.

I settled on Plato just because it had slightly more interesting shadows. My eye was delighted by some very bright highlights emerging from the darkness near its northern rim. A long thin pointed shadow poured from the base of Mons Pico toward the terminator. These shadows lengthening in the hour it took to do this sketch. Every feature was a jewel to my mind and spirit.

Just above Mons Pico as I viewed (south is up) a change in the lunar surface was apparent in the form of an Eiffel tower shaped greyness. This suface feature swept up to and finished at Piazzi Smith. Mons Piton sits with Piazzi in area across from Montes Alpes which had several sun kissed high points. I observed the needle like Vallis Alpes cutting a sharp gash in the  rugged lunar surface. It was lit slightly on its northern edge. Feathery shadows set off the  internal shape of Plato and detached from its northern rim. Bright high areas warmed themselves as they became uncloaked from the blackness.

Sketch Plato for yourself

Nestled on the plains between Mare Imbrium ( The Sea of Rains) and Mare Frigoris ( The Sea of Cold)  lies the  lava filled crater Plato.  To produce the drawing I used soft pastels as they are wonderful to work with. A water colour pencil as they are very hard and help with dark shadows and fine lines. I used a toothpick becaues of its point, good for etching out shadows. When you find Plato, you could try a simple pencil sketch to get yourself familiar with its shape and to build up your confidence to sketch more often. Always look for the shapes of shadows and points of highlight. Above all enjoy the experiences of landing your eye on the surface of the moon.

Get familiar with the moon via Virtual Moon Atlas