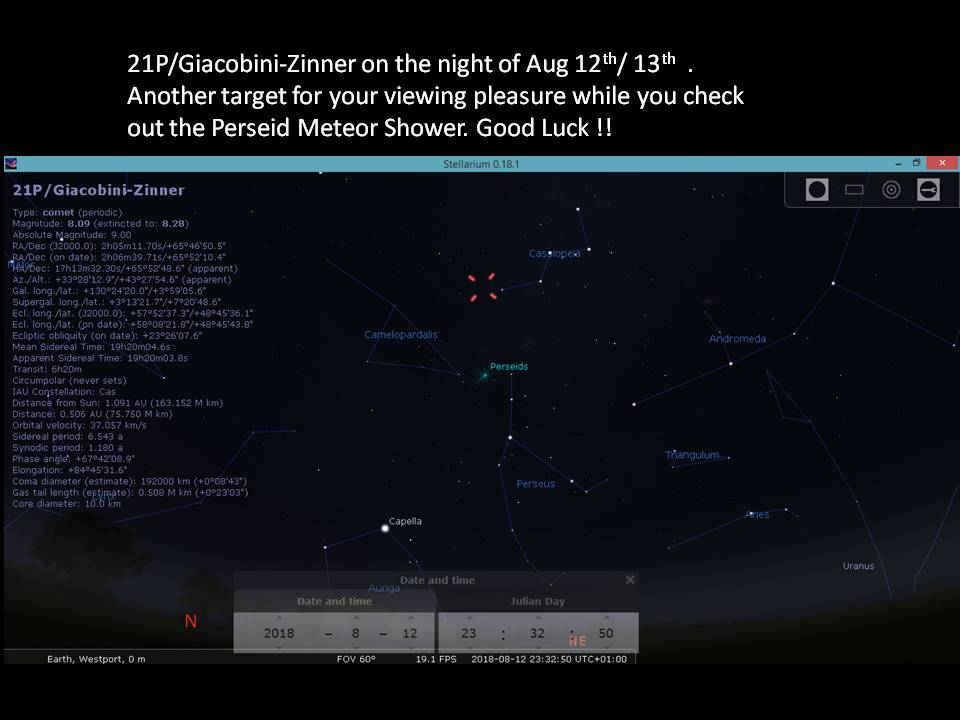 The image is a screen shot from Stellarium. In it are the constellations Perseus and Cassiopeia . Along with the radiant of the Perseids plus the position of comet 21P/Giacobini-Zinner

The Perseid Meteor Shower peaks on the nights of August 11th /12th and 12th / 13th  2017 but any clear evening up to and a few nights after should produce some meteors. Look to the NE after midnight, look under the big W of Cassiopeia , above Perseus. The radiant of the meteor shower is in that area, however keep an eye on a much wider area for Perseids.  Earth will pass through the path of Comet Swift-Tuttle from July 17 to Aug 24. Our planet will pass through dust and particles left behind by the comet. Most of these comet particles are only the size of a grain of sand. They hit our atmosphere at approx 59 km per second and burn up.   This year the moon will not interfere with the darkness of the sky as it will be a thin crescent setting before midnight.

What do you need to see the Perseids ?

It’s the best meteor shower of the year, because it is mostly warm and being outside is comfy. Get yourself extra comfy by setting up a beach chair with a good view to the NE. A few snacks, maybe a blanket and that is it. All that is required is a clear night and being attentive to the sky. Some meteors are only fractions of seconds long, some seem like a minute. Some appear to have smoke coming out of them and some splutter across the sky.

Other interesting objects to notice

At 22:30 Jupiter will be heading down in the South West, Saturn will shine in the South and Mars will look like a red emergency beacon towards the South East. ( Viewing from Ireland)    Within the constellation Cassiopeia you may find a comet ! 21P /Giacobini- Zinner has brightened. With a bit of effort you and your telescope might be lucky enough to find it in a dark sky. This is a small comet but worth a look !!!

Read my previous blogs about the Perseids 21 Precious Perseids

Get ready the Perseids are Coming

Watch a video about What’s Up for August 2018

Astronomy Software for you