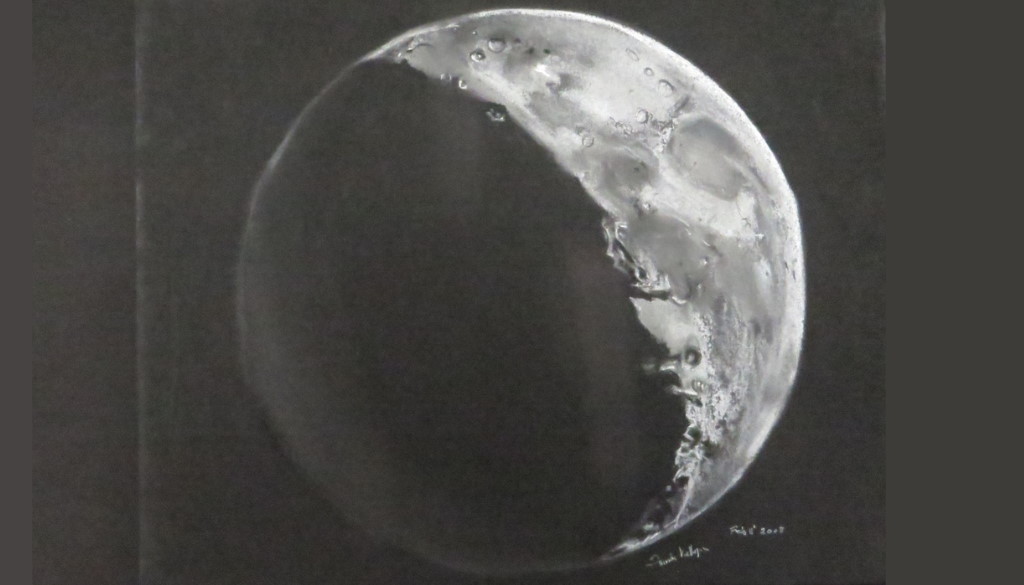 When  “The Terminator” is mentioned, it may conjure up ominous dark tones lurking within its meaning. A science-fiction term where a cybernetic organism can ask for ‘your clothes, your boots, and your motorcycle’ then ride off to alter humanity’s course. Or the visually rich line that demarks daytime from night-time on the moon.

The terminator is far from a straight line. It is ragged and uniquely fluid. Sunlight illuminates unevenly as it fills craters. Shadows form and transform during their progression across the lunar topography. Craters that penetrate the terminator and show their rims as glints of light in the blackness bring a tactile quality to a sketch. Lunar sketching in the area of the terminator often brings up a dilemma. When a drawing takes several hours, sometimes the terminator vista alters to offer a new and brightly lit feature. This crater or mountain only revealed as you finish. Do you put it in or not? In general, if it adds to the sketch, yes. If it is a mediocre addition, no.

Write your data on the drawing

Recently I came across the moon drawing below in one of my portfolios. The sketch includes a very well-defined terminator and a touch of earthshine. The picture was devoid of information. No day, date or time was written on the sheet. A bit of a hunt provided the basics, but not all data was available. Sometimes I might publish a sketch in a forum or group. All the information relating to the drawing can be online but not necessarily on the actual illustration. Note to self and others, always write the sketch details on the work.

Along the terminator, visual richness pulsates with abundance. Take a terminator tour with your telescope; it doesn’t matter if it’s a small or large instrument. It doesn’t matter if you do not know the features that you are seeing. Just enjoy the moon for itself; the identity of elements can come later. Contrast is sublime; blacks are pure, whites are sharp and exciting.

Watch sunlight gain lunar ground on a waxing moon. Feast your eyes as mountains reveal themselves in complex craters. Shadows will alter before your eyes, giving or taking away from the appearance of craters.

Sometimes even a 98% moon terminator can bring joy and results. A previous blog about drawing along the terminator tells that story from Dunsink Observatory Dublin.  Eddington crater on the moon

This article was first published in May 2018. Slightly updated here.