Visit the Vatican Observatory Faith and Science pages and you might come upon information about Maria Sybilla Merian (1647-1717), who saw the hand of God in things that make many people’s skin crawl.  In an introduction to one of her books she writes,

Ever since my youth I have been engaged in the examination of insects. I began with silkworms in my native city of Frankfurt, but then, noticing that much more beautiful butterflies, both nocturnal and diurnal, emerged from caterpillars, I was moved to gather together all the caterpillars I could find and to make observations of their metamorphoses. For this reason I set aside my social life and devoted all my time to these observations and to improving my abilities in the art of painting, so that I could both draw individual specimens and paint them in lively colors. 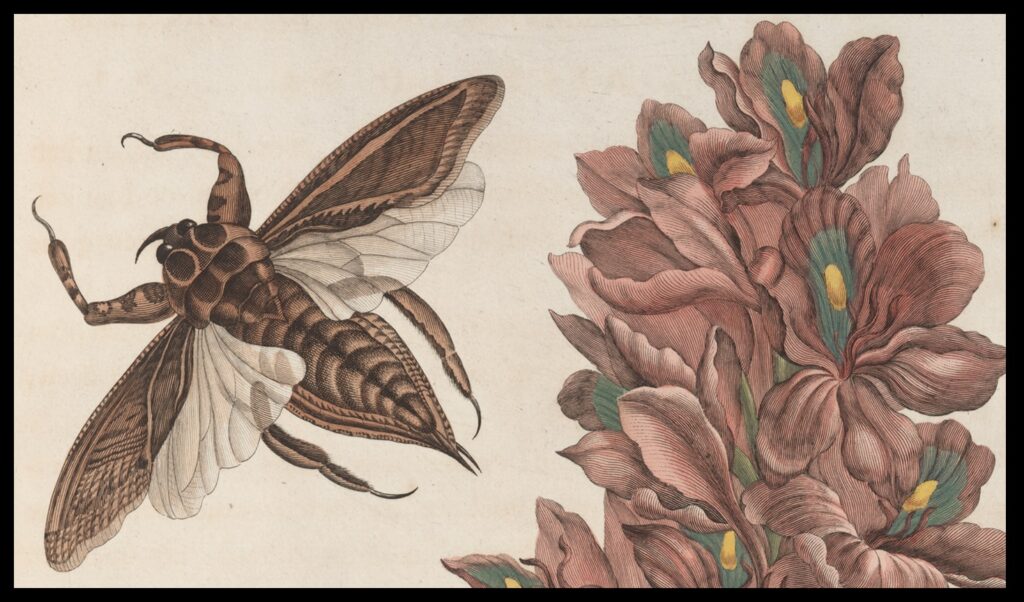 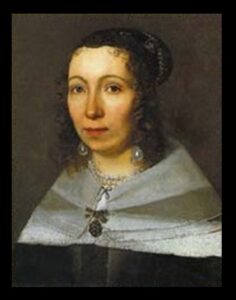 No doubt Merian stood out in her world!  She had two daughters who she sometimes recruited to assist her.  No doubt they had some things to say about their mother’s passion for bugs!  But to Merian, these creatures, and especially the transformations of caterpillars into moths or butterflies, were regular miracles:

These wondrous transformations have happened so many times that one is full of praise for God’s mysterious power and his wonderful attention to such insignificant little creatures and unworthy flying things…. Thus I am moved to present God’s miracles such as these to the world in a little book.

Merian could present these miracles well.  She was a talented artist as well as a keen and devoted observer, as two samples of her work shown above clearly show.

Click here for the Merian entries from the V.O. Faith and Science pages.

Another scientist who talked about small or creepy things in terms of God’s work was Robert Hooke (1635-1703).  Hooke was a multi-talented, multi-faceted scientist.  He studied subjects ranging from the physiology of respiration, to gravity and the mechanics of the solar system, to the elasticity of materials (anyone who has had a physics class probably recalls “Hooke’s Law” regarding elastic material), to the nature of fossils, to clock-making, to microscopy.  One of Hooke’s greatest works was his spectacular 1665 book on microscopy, Micrographia, which is every bit as cool as Merian’s works.

In Micrographia, the reading public could see pictures of the microscopic world for the first time.  Hooke introduced the use of the word “cell” in Micrographia—a word learned today by microscope-wielding students in biology classes everywhere.  Until Hooke’s work, the cellular structure of living things was unknown.  Micrographia was lavishly illustrated with pictures, fun and educational to look at—a book of science that everyone could enjoy.  And, in Micrographia Hooke describes the microscopic world as revealing the omnipotence and creativity of God. 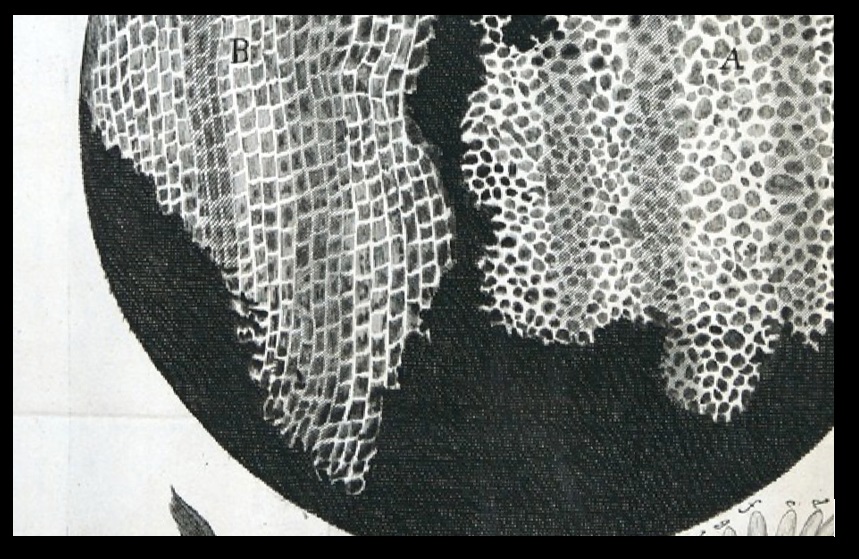 Hooke’s illustration of “cells” in cork.  He wrote,“our Microscope informs us that the substance of Cork is altogether fill’d with Air, and that that Air is perfectly enclosed in little Boxes or Cells distinct from one another,” which explains why cork is so light and springy, making good fishing floats and bottle stoppers.

In discussing the point of a needle as seen through the microscope, Hooke writes:

The point of a needle as illustrated in Micrographia.

The Point of a Needle is made so sharp, that the naked eye cannot distinguish any parts of it: It very easily pierces, and makes its way through all kind of bodies softer then it self: But if view’d with a very good Microscope, we may find that the top of a Needle (though as to the sense very sharp) appears a broad, blunt, and very irregular end.

Now though this point be commonly accounted the sharpest (whence when we would express the sharpness of a point the most superlatively, we say, as sharp as a needle) yet the Microscope can afford us hundreds of instances of points many thousand times sharper: such as those of the hairs, and bristles, and claws of multitudes of Insects; the thorns, or crooks, or hairs of leaves, and other small vegetables…

In the case of man-made needles the more we see of their shape, the less appearance will there be of their beauty: whereas in the works of Nature, the deepest Discoveries shew us the greatest Excellencies. An evident  Argument, that he that was the Author of all these things, was no other then Omnipotent;  being able to include as great a variety of parts and contrivances in the yet smallest Discernable Point, as in those vaster bodies (which comparatively are called also Points) such as the Earth, Sun, or Planets.

Its belly was large, as it is usually in all Insects, and extended into nine lengths or partitions, each of which was cover’d with round armed rings or shells; six of which, [labelled O, P, Q, R, S, and T in the figure below] were transparent, and divers kinds of Peristaltick motions might be very easily perceiv’d, whil’st the Animal was alive, but especially a small cleer white part [labelled V], seemed to beat like the heart of a larger Animal. The last three divisios, [labelled W, X, Y], were cover’d with black and opacous shells. To conclude, take this creature altogether, and for beauty and curious contrivances, it may be compared with the largest Animal upon the Earth. Nor doth the Alwise Creator seem to have shewn less care and providence in the fabrick of it, then in those which seem most considerable.

Micrographia’s illustration of an insect.

And in discussing the many eyes of a fly, he writes (referencing 2 Peter 3:8):

…I think we need not doubt, but that there may be as much curiosity of contrivance and structure in every one of these Pearls that make up a fly’s eye, as in the eye of a Whale or Elephant, and the almighty’s Fiat could as easily cause the existence of the one as the other; and as one day and a thousand years are the same with him, so may one eye and ten thousand.

And thus we see that some people find caterpillars and bug eyes creepy, but some scientists look at them and see the marvels of God’s work. 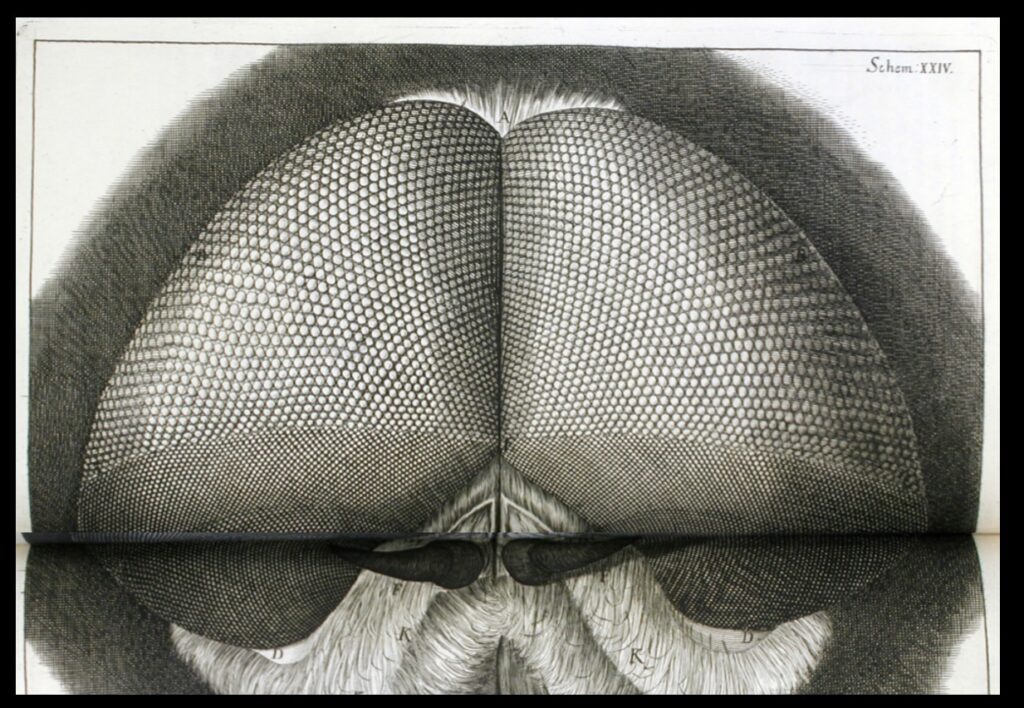 The eyes of a fly as shown in Micrographia. 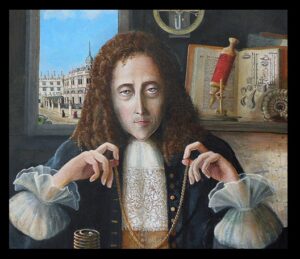 No portrait of Hooke survives.  This is a 2009 painting by the artist Rita Greer, based on descriptions of Hooke from his contemporaries.