When your favorite team is not so good, sometimes the end of the season can come as a relief.  That’s doubly true when the last couple games of the season go especially badly.  This Cosmos fan finds himself happy to see this season come to an end.  There is always next season, maybe, and hope for better days to come.

“A Tale of Two Atoms”, the 10th episode of Cosmos: Possible Worlds, was a win.  I liked the overall discussion of scientists involved in nuclear physics, especially Neil deGrasse Tyson’s clear-eyed view of those scientists.  He notes, for example, that even after World War II ended, scientists kept right on working on atomic weapons.  Apparently, many scientists were willing to continue work on weapons of mass destruction even after the crisis of war and its perceived threat of German nuclear technology had passed.

But the highlight of the whole Cosmos: Possible Worlds series for me was the animated feature in Episode 10 about Marie and Pierre Curie.  The Curies work so hard together to isolate the element radium.  But they have no idea what they are doing.  They sit and admire the glowing bits that they have produced through their labor.  They understand that, were those bits glowing by reason of chemical reaction, like glowing coals, they would consume themselves rapidly—so the Curies realize that they have discovered some marvelously powerful energy source.  They work with the radium so much that it literally permeates their lives; we see that even Marie’s cookbook is dusted with radium….

And Tyson leaves the story there.  I found that to be very effective, almost moving.  I was standing in the bleachers, cheering the team.  Tyson has no need to discuss what follows.  That is clear, for we have learned that radium is radioactive.  If Curie’s cookbook has radium on it, and is radioactive, then her cooking must have been likewise.  Marie and Pierre were living in, and even eating, radioactive radium, happily and unwittingly killing themselves.

Marie and Pierre Curie, radium, and her cookbook, as portrayed in Cosmos.

Marie died of aplastic anaemia, a blood disease associated with exposure to large amounts of radiation.  Her body is radioactive.  She was buried in a lead-lined coffin.  But the Curies were not just killing themselves.  The discovery of radium led to the production of glowing radium paint.  Women worked in the manufacture of clocks with glowing dials that could be read at night.  To coax a fine tip out of the paint brushes that they used to paint the dials, they would lick those brushes… and things did not go well for them.  Things have not gone well for many who got too close to radioactivity in the years since.  We know today that radioactive materials are dangerous.  We did not learn about that danger through divinely infused knowledge, or because scientists were so brilliant that they just figured out that of course this new energy source might be dangerous.  We learned because of what radioactive materials did to people when radioactivity was the cool new technology, and no one realized the danger it posed.  Episode 10 of Cosmos gave us a clear-eyed look at the tragic, darker side of science.

But Episode 10 was one of the bigger wins of the series.  The next episode I saw was Episode 12, “Coming of Age in the Anthropocene”, about the impact that human beings have on planet Earth.  It was fine.  It prominently featured a cute baby, and you can’t go wrong with a cute baby.  Its animated features about Cassandra and the Trojan War, and about CFC’s were both good.  It was worth a watch. 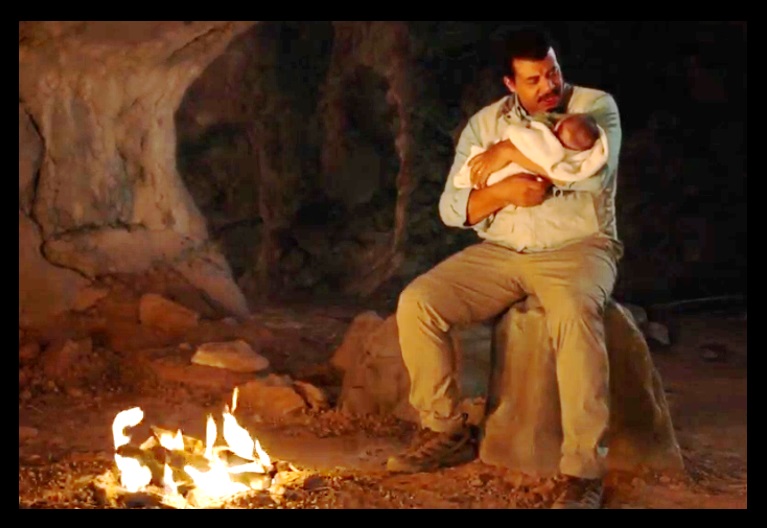 Tyson and baby.  That rock he is sitting on came from the set of the original Star Trek, right?

But then I saw Episode 11, “The Fleeting Grace of the Habitable Zone” and Episode 13, “Seven Wonders of the New World”, and each of these was a chore to watch.  Both were plagued by mounds of computer-animated fluff.  And the fluff was not even about real science.  Rather, we get:

Indeed, the end of Episode 13, the final episode of the season, was an extended display of computer-spawned “fireworks” (complete with crowds “oohing” and “aahing”) that were supposed to be some representation of the formation of the universe.  Look!  Up in the sky!  It’s the first stars forming—Boomboomboom!  Look!  It’s something crashing into a molten, glowing Earth, producing a shower of sparks and (gasp!) The MOON!  Oooh.

Taking the baby (arrowed) to the holodeck to see Apollo 11 land on the moon, and a crowd erupts in cheers at the celestial fireworks show.

Throughout this entire season, Cosmos: Possible Worlds has suffered from too much—way too much—emphasis on bright and shiny objects spewed forth from some computer—objects that then usually proceed to explode, crash into something, fly off on a beam of light, etc.  These last two episodes suffered from this all the more, and watching all of this tested my patience.  This season should not be titled Cosmos: Possible Worlds, but rather, Cosmos: A Computer Generated WOWzaverse.  Anyone who is inspired by Cosmos to buy a real telescope and to see the real universe is going to be very, very disappointed.

Rather, Cosmos presents us with a computer-generated universe that is flashier than what you will ever see.  Cosmos largely ignores the science that exists—how we know the things we know—and mostly asserts what we know (just take it on authority, viewers) while also showing us cool graphics about cool ‘sciencey’ stuff like warp drive, holodecks, galactic databases of alien civilizations, and our densely packed asteroid belt* (to select from just the last two episode) that in fact we don’t really know.  Cosmos doesn’t bother to show us a historically accurate view of Saturn as Galileo drew it, and instead presents a Cosmos idea of Galileo’s view of Saturn.

Instead of the real universe, real science, and real history, Cosmos too often wants to give us something better, cooler, and more exciting.  The good aspects of the show can’t outweigh this Big Problem.  I find myself questioning even those parts of the show I really like.  After all, I see so much baloney in other parts.  I am no expert on the Curies.  Is that animated feature about them, that I liked so much, accurate?  Or did Cosmos just make things look they way they thought would be coolest, like with Galileo’s Saturn?

I am a die-hard Cosmos fan.  I have been since Sagan’s original show.  But it seems I am doomed to be a die-hard fan of a team that too often does not come through.  This season the losses significantly outweighed the wins—again.  That was aggravated by the fact that the season ended with a couple of games that went so badly that I wanted to head for the exits well before the games were over.  But a fan can always hope for the future.  Perhaps next season will be better… if there is a next season.

Click here for all posts on “Cosmos: Possible Worlds”.

*Cosmos featured the typical Hollywood, “Empire Strikes Back” imagery of our asteroid belt as a veritable swarm of floating rocks.  In fact, the asteroids are widely spaced (which is why we have been able to send all those space probes into the outer solar system without Han Solo to pilot them through the asteroid belt).