In the previous posting here, Bob Trembley has done his usual excellent job reporting on the news and implications of the announcement yesterday about gravitational waves. 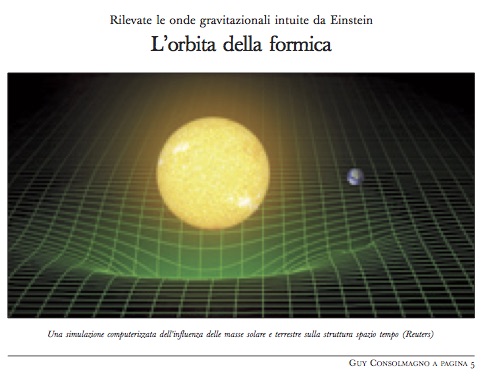 This call-out to my article appeared at the bottom of the front page on Friday, Feb 12 L’Osservatore Romano

As it happens, I was asked to write a short article for L’Osservatore Romano on the topic, which appeared (in Italian) on their web site this morning. I though it might be useful to run the original English version here.

I wrote this last night after a busy day in Ottawa giving two talks, so I apologize for any of the obvious errors. (I get to blame the translator for any errors in the Italian version! But in fact an such mistakes probably are mine.)

On Thursday morning, scientists at the Laser Interferometer Gravitational-wave Observatory (LIGO) announced the first observation of gravitational waves. This discovery was a significant confirmation of a prediction first made by Einstein’s theory of General Relativity, which itself was published just over 100 years ago, in November 1915.

Newton’s physics had invoked the concept of gravity as a force to explain the motions of the planets around the sun, or the fall of an apple on Earth. However, Newton only described how gravity behaved; he never attempted to understand what gravity actually was. When challenged to explain this mysterious force, he famously replied, “I feign no hypotheses.”

More than 200 years later, however, Einstein did propose an explanation for gravity in his Theory of General Relativity. Space and time, he suggested, were merely different dimensions of a reality to be called space-time; and gravity, he proposed, was the warping of space-time.

It’s hard for us to picture how ordinary three dimensional space can be “warped”. But if you imagine that space were just a flat two-dimensional plane, the presence of a massive object would bend that space just like a heavy weight placed on a sheet of rubber would pull the sheet into a distorted shape. An ant walking across the distorted sheet would wind up walking around and around the weight, as the bend in the rubber would turn its path. In the same way, Einstein proposed, planets orbit a star because the star’s mass has bent the space nearby, turning straight-ahead motion into a path around the star.

But if space time can be warped, is it possible for that warp to act like a ripple traveling away from the source of the distortion? Einstein himself was not sure at first; after proposing just such an effect when he first described General Relativity, he changed his mind several times, before finally concluding mathematically that such waves were inevitable.

Such waves could occur if something occurred to change the position of a massive object; as it moved, it would cause the space-time around it to also move. In order for such waves to be noticed across the enormous distances of space, however, the moving mass would have to be very massive indeed.

In 1974, a pulsar (a massive star which emits pulses of radio waves at a very precise rate) was found in orbit around a massive neutron star; over time, its orbit was seen to decay at a rate that matched what was calculated if the system was emitting energy in the form of gravitational waves. However, the waves themselves were not directly detected.

To see such waves themselves, which would be very small, a pair of identical detectors were constructed at opposite ends of the United States, in the states of Louisiana and Washington. (A similar detector called VIRGO is being developed near Pisa.) They both have lasers shining down 4 kilometer-long tunnels and reflected off mirrors of extremely high precision. The lasers and mirrors are so delicately balanced and insulated from other forms of vibration that any fluctuation in local space-time could be detected as changes in the distance down the tube, a distance that the lasers could measure with extremely high precision — as little as one thousandth the diameter of a proton. Each detector has two such tunnels set at right angles to detect such waves coming from any direction.

The first version of the LIGO experiment was set up ten years ago, but it was only with a recent upgrade that the scientists felt they had any hope of actually detecting a wave. In fact, the detection reported on Thursday was an event that occurred while the new system was still being tested last September. That same event was seen, identically, in both Washington and Louisiana; and the nature of the fluctuations exactly matched what had been predicted for the collision of two black holes, each 30 times more massive than our Sun, which converted roughly half their combined mass into a massive burst of energy.

More than just confirming Einstein’s theory, the experiment is also already living up to its designation as an “observatory.” By this detection, the LIGO team have not only proved that gravitational waves exist; they also have learned something new about black holes, objects that could never be seen directly because their mass and density prevents light or radio waves from escaping their gravity.