The Catholic Astronomer’s Blogger-in-Chief, Br. Guy Consolmagno, Director of the Vatican Observatory, is in Hopkinsville, Kentucky for the big 2017 eclipse.  That, and the fact that I am from Kentucky, is why I am calling this the great KENTUCKY eclipse (check out Monday’s eclipse post, and Wednesday’s, too).  So what is the big deal about Hopkinsville?

An eclipse occurs when the moon’s shadow sweeps across the surface of the Earth.  The general path of the shadow in this eclipse is as shown by the arrow in the figure below. 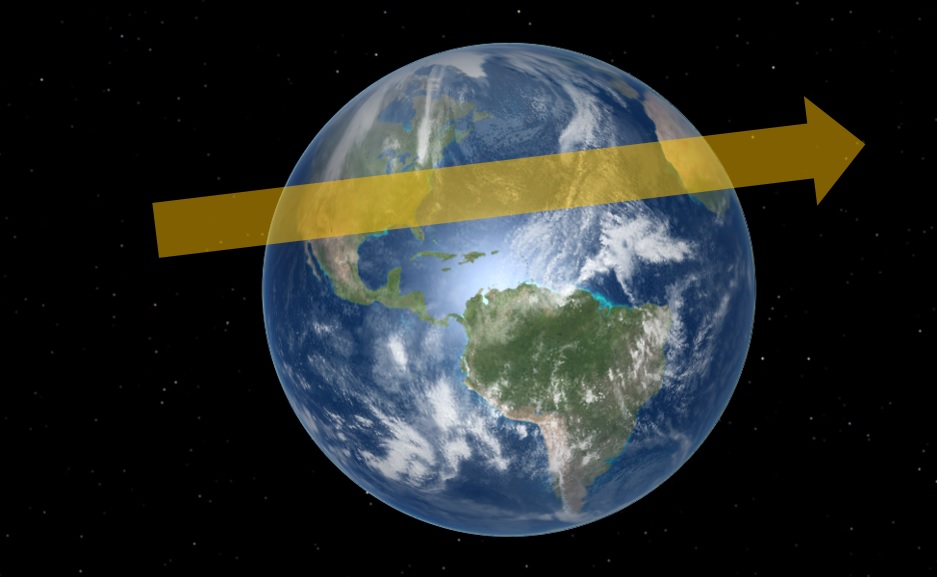 NASA has produced some excellent videos that show the motion of the moon’s shadow across the U.S., both as seen from above, and as seen “flying along with the shadow” and revealing the effects of Earth’s terrain.  Click the figures below, or click the links in the captions, to see those videos.

Hopkinsville is the “point of greatest eclipse”—the point where the sun, moon, and earth line up most perfectly during the eclipse—the point where the moon’s shadow hits Earth most squarely.  To be specific, Hopkinsville is just really close to the point of greatest eclipse.  The actual point is on a country road a few miles west of Hopskinsville, and center of the moon’s shadow will hit that point at about 1:25 PM Central Daylight Time on August 21.  As seen from space, at that moment the shadow will look like this, half-way through its path across our planet: 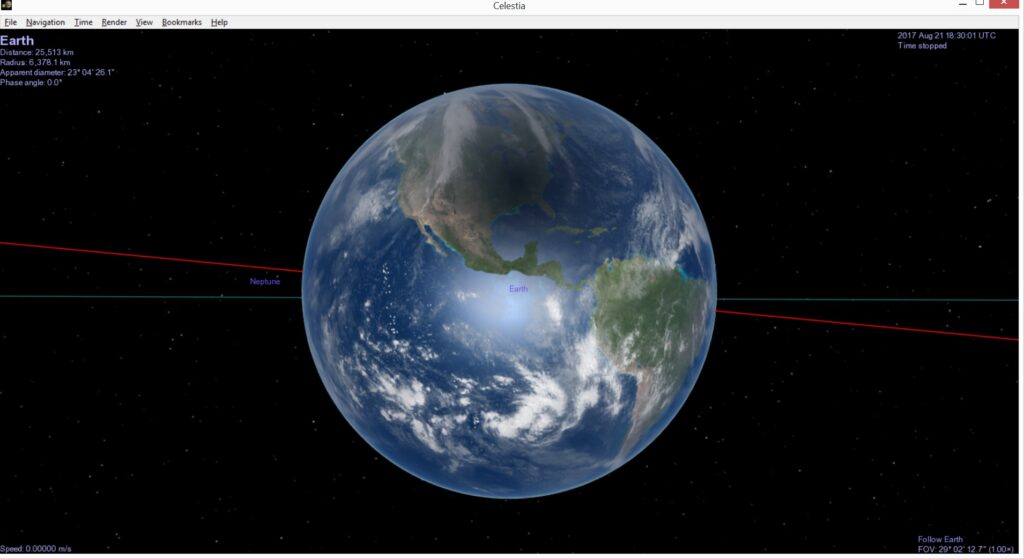 (In these images the red line is the Earth’s orbit, the green-grey line is the moon’s orbit.)  If we were behind the Earth, we could see the moon, sun, and Earth all lined up at that moment.  It would look something like what is seen below.  Note how the moon and sun appear to have the same size, although in fact the moon is much smaller than the sun (but also much closer): 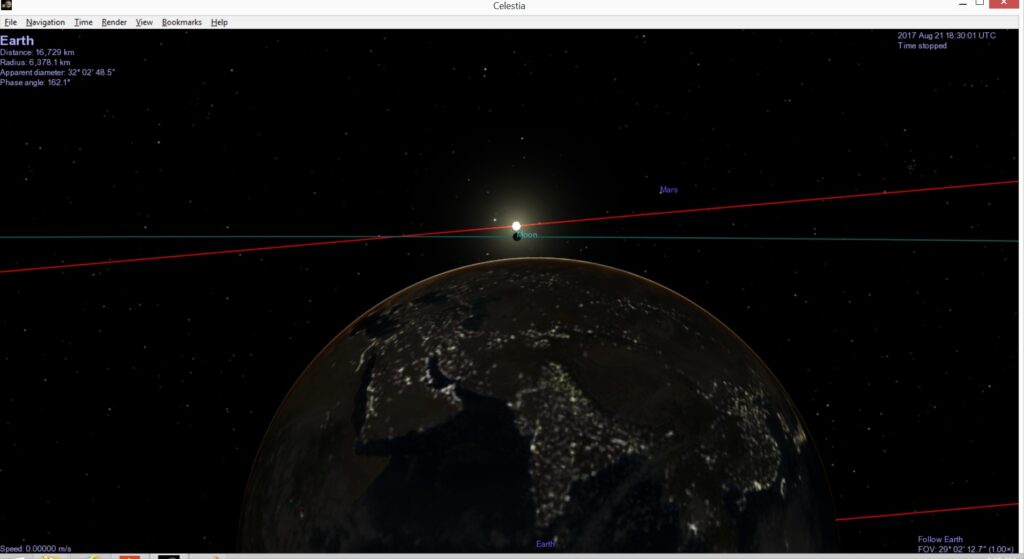 If we were near the moon, we could see it and its shadow on the Earth, like this: 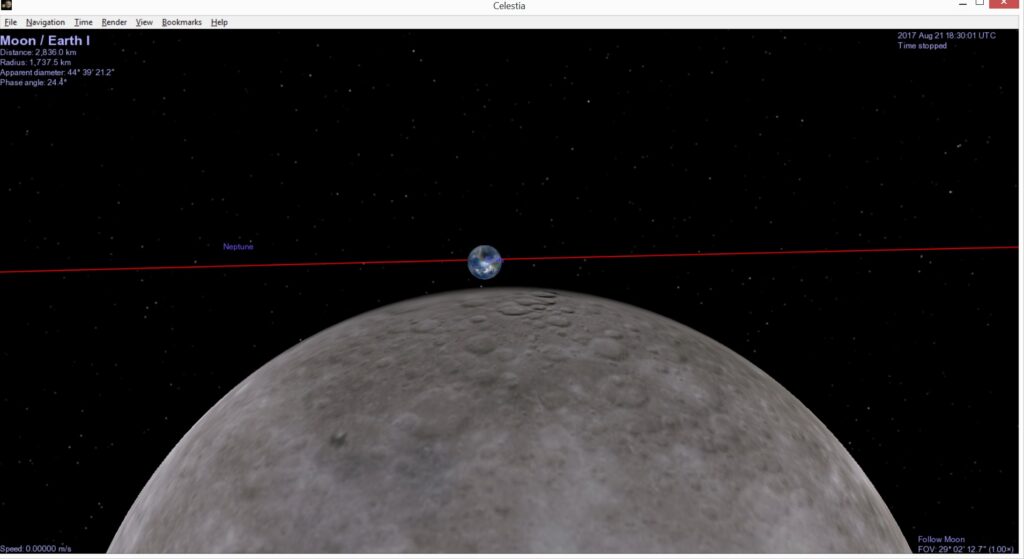 And, if we were at the sun, which is the object being eclipsed, we would see not much at all, because the Earth is tiny compared to the sun, and 93 million miles distant from the sun.  Like this: 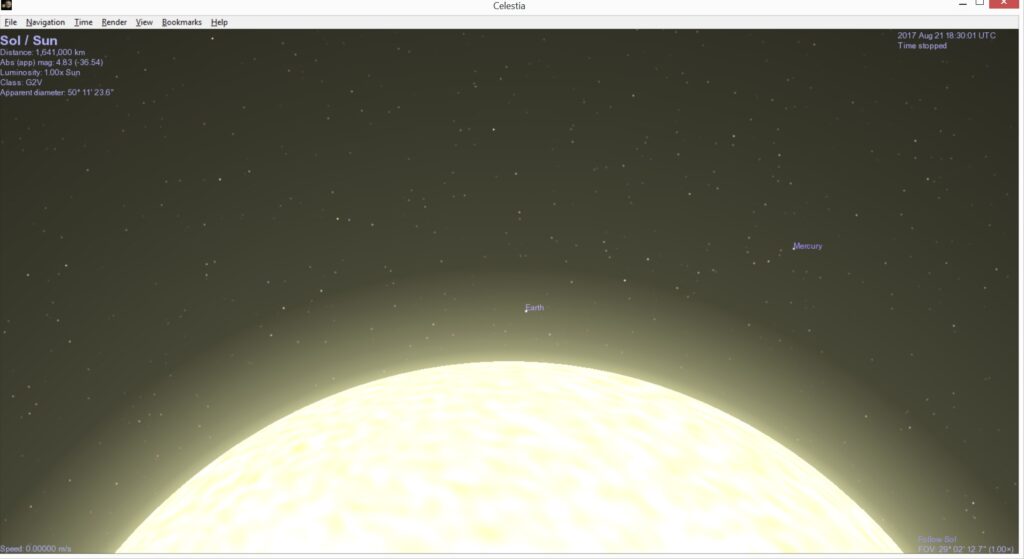 Recently George Musser noted in the New York Times that not one planet in a billion has a moon that creates a perfect solar eclipse—one where the moon just covers the sun, allowing all the sun’s corona to be seen—but our does.  And Hopkinsville, Kentucky, will be the place where the perfect solar eclipse lines up most perfectly.  There are lots of places that will have a view of the eclipse that is nearly the equal of the view from Hopkinsville (and thus if you are making a day trip to see the eclipse, you should avoid Hopkinsville and the traffic there).  But Hopkinsville is at that perfect point.  That’s why it is a big deal…

…even if the weather there is lousy at 1:25 CDT on August 21, 2017.  Despite the gloomy picture on Monday and Wednesday, the outlook at the moment is said to be good! 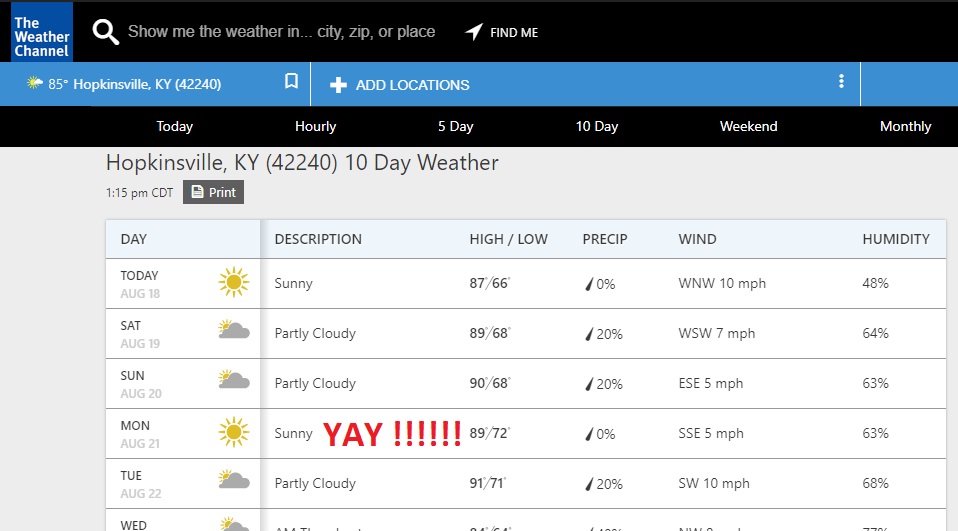