Our friend David Levy was the guest speaker at the annual Vatican Observatory Foundation annual public astronomy seminar, held last October in Ann Arbor. He writes a monthly astronomy column, Skyward, and has graciously given us permission to run it here as well. Here’s his December column: 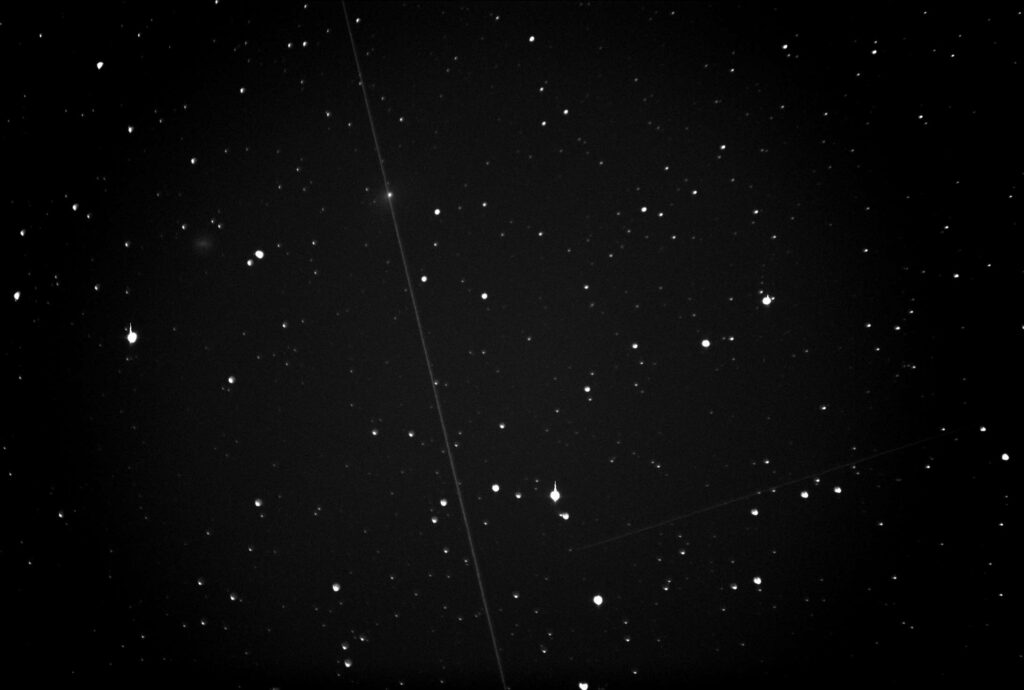 On July 4, 2005, an American spacecraft collided with Tempel’s comet, causing it to increase in brightness. At the same moment, a meteor, probably from the Omicron Deraconid meteor stream, passed directly in front of the comet. Photograph by David Levy.

Last month I visited the University of Pittsburgh at Johnstown, Pennsylvania, to give a lecture. The experience was fun and intellectually enlighting. Just before the lecture I had a good chat with University President Dr. Jem Spectar during which he mentioned the name of Zechario Sitchin, a philosopher who has made some curious predictions relating to astronomy.

I decided that Sitchin was worth following up, not because he predicted that some unknown planet might come barging in on Earth someday, but because he was a student of some ancient Mesopotamian astronomy. Mesopotamia was a large area between the Tigris and Euphrates Rivers, now a part of Iran. Their astronomy dates back some three thousand years, long before the advent of modern astronomy. Some of our most ancient star names derive from them, particularly a fainter star called Almach.

Almach is far from one of the brightest stars in the autumn sky. But it, plus the modern faint constellation of Triangulum, are a part of the ancient Mesopotamian constellation called Mulapin, or the Plough. The earliest writings about the Plough are believed to date back to about 1000 BCE, which would substantially predate Greek astronomy.

Where does this leave Sitchin? He has used a rather cursory reading of the ancient texts to propose the idea that a probably fictitious planet, called Nibiru, is inhabited by a race of extraterrestrials who are responsible for much of the achievements of our Earth.

There is absolutely no evidence to back up Sitchin’s specific prediction. However, the general idea of planetary collisions, particularly one that took place about 4.5 billion years ago that led to the formation of the Moon, was confirmed by lunar rocks collected by the Apollo astronauts and is now widely accepted by planetary scientists.

Ancient literary predictions of modern discoveries are not confined to Mesopotamia. The famous English author Jonathan Swift, in his Gulliver’s Travels, imagined a city in the clouds called Laputa, whose scientists had found two moons orbiting Mars. The story was published in 1723, more than 150 years before the actual discovery of the moons by Asaph Hall on August 17, 1877. He got the sizes right, and was close on their distances to Mars. Swift’s idea of a cloud city is also found in “The Cloud Minders” episode of the original Star Trek series.

We may, and should, argue with Zechario Sitchin. His argument is ridiculous. But his curiosity about how the ancient people of Mesopotamia pictured the night sky three thousand years ago is not. Had those people not bothered to look up at the night sky and wondered, we would not have walked on the Moon in 1969, or watched a comet impact Jupiter in 1994. Those people from half a world away, and from a distant time, observed the planets and helped to cement the foundation of our modern understanding of the cosmos. This little journey into ancient astronomy was well worth a brief detour with President Spectar, and a look at the sky above the beautiful campus of the University of Pittsburgh at Johnstown.