Skip to content
I am writing to you from Rome with wonderful news — we have a new Father General… the so-called “Black Pope”!

As you may have seen in our Fall Newsletter I was elected to attend the 36th General Congregation. More than 200 Jesuits from around the world (including six brothers like myself) gathered in Rome at the beginning of October. Our first task was to choose a new Father General, to replace Fr. Nicholas who has retired due to failing health.

It was a fascinating process. We spent the first week discussing in detail the current state of the Church and the Jesuit order (while recovering from jet-lag!). Then this past Monday we entered a four day period called “Murmuratio” — where we all broke off into pairs and discussed, one on one, the possible candidates, their strengths and their weaknesses.

In this way I had deep conversations — and got to know very well — probably a quarter of all the Jesuits here, as well as hearing from them about the other Jesuits they had been “murmuring” with. During this time we did not leave the building, and we had only modest sack lunches (a sandwich, an apple, and a crostata… nothing like the typical Roman pranzos!) to keep us focussed on the task at hand.

Note that aspiring for the job of Father General, or campaigning for someone else, is strictly forbidden. Indeed, as we all know how difficult the job is, no reasonable person would want to!

Every morning began with a lengthy communal prayer, every evening ended with Benediction and the Mass. I have to say that it was one of the most intense religious experiences I have ever had. Finally, on Friday morning, we prayed the Mass of the Holy Spirit together, processed into our meeting room, and the doors were locked while we began our voting.

Even the voting was intensely spiritual. Before we started, one of the senior Jesuits (as it happens, an Indian) gave us an exhortation based on the rules for election that St. Ignatius had set up in our constitutions. This was followed by an hour of silent prayer, before we began the long task of writing out our ballots, and entering them one by one into the ballot box. The vote was secret; indeed, even the number of ballots was secret. But there was not secret about the joy we felt when Fr. Sosa reached the magic number of a majority of votes! 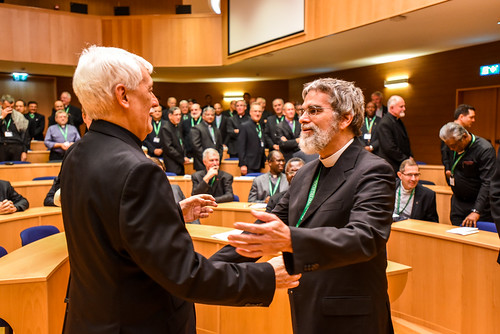 Our new Father General is Arturo Sosa SJ, from Venezuela. He is very well known to us at the Vatican Observatory, because for the past two years he has been our “local boss” in Rome. He’s visited our communities both in Rome and in Tucson several times (we even got him up to see the Grand Canyon!) and has been a tremendous supporter of our work in many, many ways.

You can read more about him, and our congregation at the General Congregation web site. See if you can spot me in some of the videos!

With this election our work has only begun. We will continue to meet for the next month or so to take care of many bits of business concerning the work of the Jesuit order world-wide. As a result I will be staying here in the Jesuit headquarters for a while. (I am living in one of the rooms in the Infirmary, among many of our elderly brothers, whose care and prayerfulness has been just wonderful to see.) And so — speaking of prayer — I hope that all of you will continue your prayerful support for me, and for the Vatican Observatory Foundation!

One way to start is to subscribe, on a paying basis, to support The Catholic Astronomer. Click HERE to find out how to do that.