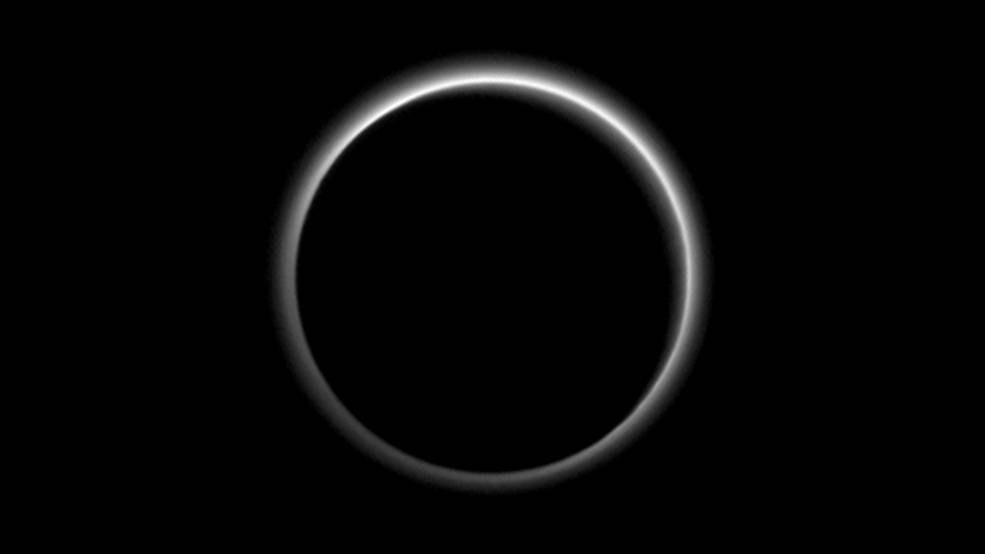 Backlit by the sun, Pluto’s atmosphere rings its silhouette like a luminous halo in this image taken by NASA’s New Horizons spacecraft around midnight EDT on July 15. This global portrait of the atmosphere was captured when the spacecraft was about 1.25 million miles (2 million kilometers) from Pluto and shows structures as small as 12 miles across. The image, delivered to Earth on July 23, is displayed with north at the top of the frame.
Credits: NASA/JHUAPL/SwRI

Flowing ice and a surprising extended haze are among the newest discoveries from NASA’s New Horizons mission, which reveal distant Pluto to be an icy world of wonders.

“We knew that a mission to Pluto would bring some surprises, and now — 10 days after closest approach — we can say that our expectation has been more than surpassed,” said John Grunsfeld, NASA’s associate administrator for the Science Mission Directorate. “With flowing ices, exotic surface chemistry, mountain ranges, and vast haze, Pluto is showing a diversity of planetary geology that is truly thrilling.”

Just seven hours after closest approach, New Horizons aimed its Long Range Reconnaissance Imager (LORRI) back at Pluto, capturing sunlight streaming through the atmosphere and revealing hazes as high as 80 miles (130 kilometers) above Pluto’s surface. A preliminary analysis of the image shows two distinct layers of haze — one about 50 miles (80 kilometers) above the surface and the other at an altitude of about 30 miles (50 kilometers).

“My jaw was on the ground when I saw this first image of an alien atmosphere in the Kuiper Belt,” said Alan Stern, principal investigator for New Horizons at the Southwest Research Institute (SwRI) in Boulder, Colorado. “It reminds us that exploration brings us more than just incredible discoveries — it brings incredible beauty.”

Studying Pluto’s atmosphere provides clues as to what’s happening below.

“The hazes detected in this image are a key element in creating the complex hydrocarbon compounds that give Pluto’s surface its reddish hue,” said Michael Summers, New Horizons co-investigator at George Mason University in Fairfax, Virginia.

Models suggest the hazes form when ultraviolet sunlight breaks up methane gas particles — a simple hydrocarbon in Pluto’s atmosphere. The breakdown of methane triggers the buildup of more complex hydrocarbon gases, such as ethylene and acetylene, which also were discovered in Pluto’s atmosphere by New Horizons. As these hydrocarbons fall to the lower, colder parts of the atmosphere, they condense into ice particles that create the hazes. Ultraviolent sunlight chemically converts hazes into tholins, the dark hydrocarbons that color Pluto’s surface.

Scientists previously had calculated temperatures would be too warm for hazes to form at altitudes higher than 20 miles (30 kilometers) above Pluto’s surface.

“We’re going to need some new ideas to figure out what’s going on,” said Summers.

The new images show fascinating details within the Texas-sized plain, informally named Sputnik Planum, which lies within the western half of Pluto’s heart-shaped feature, known as Tombaugh Regio. There, a sheet of ice clearly appears to have flowed — and may still be flowing — in a manner similar to glaciers on Earth.

“We’ve only seen surfaces like this on active worlds like Earth and Mars,” said mission co-investigator John Spencer of SwRI. “I’m really smiling.”

“At Pluto’s temperatures of minus-390 degrees Fahrenheit, these ices can flow like a glacier,” said Bill McKinnon, deputy leader of the New Horizons Geology, Geophysics and Imaging team at Washington University in St. Louis. “In the southernmost region of the heart, adjacent to the dark equatorial region, it appears that ancient, heavily-cratered terrain has been invaded by much newer icy deposits.”

The New Horizons mission will continue to send data stored in its onboard recorders back to Earth through late 2016. The spacecraft currently is 7.6 million miles (12.2 million kilometers) beyond Pluto, healthy and flying deeper into the Kuiper Belt. 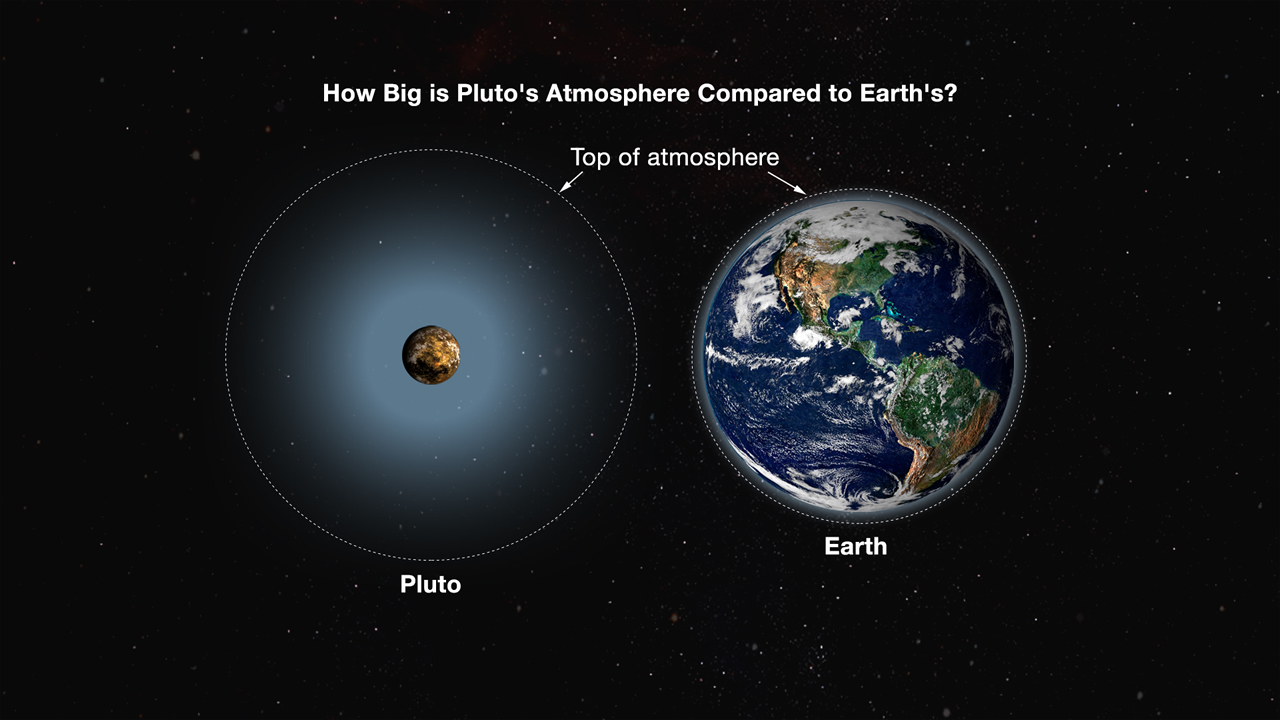