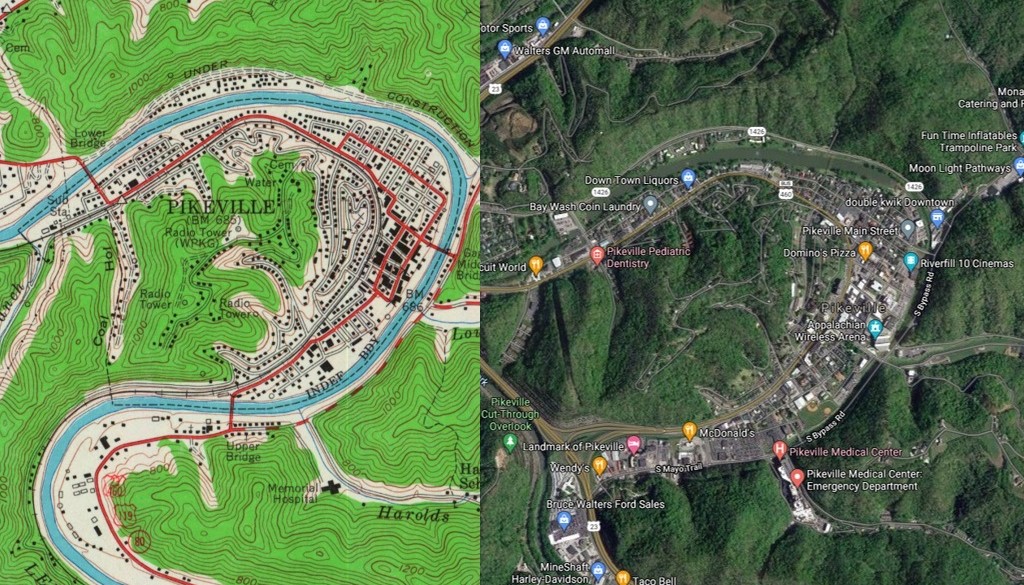 A positive and different vision for a better future.  That is what we need in the Climate Change discussion.  If we had that, the discussion might be more productive.

The August 9 release of the latest United Nations Intergovernmental Panel on Climate Change (IPCC) report brought on the usual media tsunami.  Nothing that I have seen in that tsunami has been positive and different.  It has been a lot of stuff like this, from a conversation between Michael Barbaro and Henry Fountain, both of the New York Times, broadcast on the August 13 episode of the Times’s show, “The Daily”:

Yeah, I mean, some countries are making better progress than others. A couple of European countries have really made progress. But most everybody else, including the United States: we’ve proposed a lot of things; we haven’t done much to cut emissions; and even the proposed cuts are really not enough to fill this window of opportunity to get us to a stable climate by 2050. So we’re pretty far behind… transforming the world’s energy system is a huge, huge undertaking. It’s going to cost a lot of money. And it’s just going to require a lot of will…. We could do this starting tomorrow. It wouldn’t be easy. It would be really costly, and it might take a little bit longer than we thought. But we could do it starting tomorrow if there was the will…. And of course, the problem is that takes time, right? And we don’t have much time. We’re kind of out of time, really.

And I’m struck, Henry, by the fact that when we step back and think about all of the report’s big takeaways… that this all reminds us that at the heart of the Climate Change fight is generational sacrifice, right? It is asking people to make changes that will only really be felt, in many cases, after we are gone. And that is not an easy thing to ask of human beings; it’s not an easy thing to ask of governments. It requires collective action that you don’t really see the benefit of in your own lifetime, perhaps. And that’s why people tend to throw up their hands.

I guess so, but if you think about it, what we’ve been doing — what the boomer generation, which I’m a member of — we’ve been pumping CO2 into the atmosphere willy nilly, right, for decades. Now we’re saying the future is going to be bad. So we’re, in terms of sort of sacrifice, we’re sacrificing the kind of lifestyle that we’ve all enjoyed for decades. We’re asking our kids and our grandkids to accept a lesser future because of what we did. So that’s really — that bothers me a lot, I mean — and you can say we did it because we didn’t know: we didn’t know about Climate Change in the 1950s and the 1960s. But we’ve certainly known about climate change for the last couple of decades. So we continue to do it, right? — not even — even knowing that what we’re doing is bad, we’re continuing to do it now. Even [when] we have this report that says, in no uncertain terms, we’re responsible for this. So it’s kind of the inverse, right? We’re not sacrificing, and we’re asking our children and grandchildren to sacrifice, to not enjoy the life we’ve had, because of what we’ve done….

Positive and different that is not.

There are people who I know and respect who largely reject the idea of Climate Change as it is broadly presented in the United States.  I may not agree with these Climate Skeptics, but I can surely understand where they are coming from.  What in that “Daily” conversation would attract them?  In that conversation there is no vision, nothing that might persuade someone who does not already have the views about Climate Change that they have.  Who wants to be on the side of gloom and doom?

So let us consider this idea that we will be “sacrificing the kind of lifestyle that we’ve all enjoyed for decades”, and “asking our kids and our grandkids to accept a lesser future” in order to keep the world from heating up.  In particular, let us consider the period of time mentioned in the “Daily” discussion: the last half-century or so—the lifetime of a “Baby Boomer” like Henry Fountain.

I heard the conversation between Barbaro and Fountain while on a road trip with my wife to Breaks Interstate Park.  The park is located in the Appalachian Mountains on the Kentucky-Virginia border.  A trip through Appalachia illuminates discussions like this in interesting ways.

For example, I can imagine my Climate Skeptic friends driving through Appalachia, passing highway signs that warn drivers to be on the lookout for elk in the road, while listening to Barbaro and Fountain talk about environmental catastrophe.  Elk were extinguished in Kentucky for a long time.  They were re-introduced to Kentucky a couple decades ago.  Now we have to watch out for them on the road.  That makes it easy for a Climate Skeptic to scoff at environmental alarmists.  Who wants to listen to people who talk about the heating of the globe but cannot see the obvious positive environmental progress that has occurred in the past half-century or more?

But more significant illumination comes from the very road to Breaks on which those warning signs are found.  US Highway 23 runs north-south through Eastern Kentucky.  This is the Route 23 that Dwight Yoakam sung about in his old hit country song “Readin’, Writin’, and Route 23”.

But as Yoakam notes in the video above (from a concert in Prestonsburg, along US 23)—when he was young (he was born in 1956), US 23 was a much smaller road, a much more car-sickness-inducing road, than it is now.  Indeed, US 23 is now a huge road.  What is more, at Pikeville, the seat of Pike County, the road builders who enlarged US 23 cut the road straight through the mountain on which the town sits, bypassing the town altogether.

But US 23 was not the only thing re-routed through that cut.  The Levisa Fork of the Big Sandy River, along which Pikeville had been built, was re-routed through the cut as well.  Pikeville is no longer on the flood-prone Levisa Fork.  Part of the old riverbed is now a long lake.  The rest was filled in (with debris taken from the cut, no doubt) for development.  Big Sandy Community College—part of the Kentucky Community & Technical College System in which I was long a professor—sits on land that was once the bed of the Levisa Fork.

Between Yoakam’s childhood and today the taxpayers of the USA poured enough money into expanding US 23 to reshape the very surface of the Earth.  Today Pikeville is served by a major road.  It has a community college.  It is less threatened by flooding.  There’s that “kind of lifestyle that we’ve all enjoyed for decades”.

But that lifestyle is not all just an unmitigated good.  A little north of Pikeville, my wife and I pulled over to drop a postcard in the mailbox at the post office in Betsy Layne, Kentucky.  While there, a small blue house with a nice porch (below) on US 23 caught our eye—a nice, well-kept place, and certainly old enough to have been there when Yoakam was riding down US 23 as a car-sick kid.

Let us imagine that the owners of this house are a couple in their nineties who have lived there for seven decades.  When they were young, the house was well off US 23.  The highway itself was much smaller and less travelled.  Today they are right on the road.  They are subject to constant highway noise and constant exhaust.  They probably cannot get to the post office that is located just across the road from their house without driving there—I would not want to have to cross US 23 on foot.

What holds for this house holds for US 23 and the Pikeville area more broadly.  US 23 from Pikeville to Betsy Layne is today a long strip of the sort of business stuff found along so many large roads in the USA: grocery stores, “big box” retailers, auto dealerships, etc., with vast parking lots all illuminated at night and sending light up into the Appalachian skies (the Milky Way we saw at Breaks—many miles from Pikeville—was one of the best I have seen).  These businesses of course are of value to the area, but they are inaccessible except by motor vehicle.  So is Pikeville’s Catholic church, which is in the same area along US 23.  Anyone too young, too old, too poor, too disabled, or otherwise unable to drive is cut off from all this—often cut off from even crossing the street.  Pikeville or Betsy Layne in Yoakam’s youth were places where people could get around by foot or by bicycle.  The young, the old, the poor could go to the grocery store, or to church, on their own.  A teenager could go work at the grocery store, or serve at mass, even if he or she did not have motor transportation.

My point here is not to romanticize the past; certainly not getting flooded is a good thing.  My point is that US 23 illustrates how the past half-century or more has not been such a great “kind of lifestyle” that it cannot be improved upon—substantially, and in very basic ways.  There are versions of US 23 all over the United States and other countries.  They all create a world where lots of people, including children and the elderly, are cut off from groceries, churches, and the stars of the night sky.  That world can be improved upon.  And in Pike County’s case, it has not been so great a world as to keep people there—the county’s population peaked in the 1950s at over 80,000, and now it is under 60,000 and falling (which is of course the point of Yoakam’s song about Appalachia’s “great migration” northward).

Light blazing up into the Appalachian skies from parking lots along US 23 is a great symbol of that world.  Light pollution is money going down the drain.  It is carbon emissions to no purpose.  We only do it because for some reason we have come to think it is good.  But it is stupid, and if we are forced to stop doing it (and many of these other things that are part of the lifestyle of the past decades) we will have lost nothing at all, and gained much.

Change from doing stupid things is not something to bemoan.  We have remade our world when we want to.  We have moved mountains.  We have re-routed rivers.  We have addressed problems from flooding to the extermination of wildlife.  But we have not created a perfect world.  Changing it can make life better.  A Climate Skeptic can see the appeal to a better world—one quieter and less smelly (electric vehicles), more accessible for everyone (less vehicle-dependent and energy-dependent development), and with more beautiful night skies.  Let us consider that things can be both different and better, and that it is not hard to imagine them as different and better.  There can be positives to trying to fix the Climate Change problem.