As we continue our election cycle in the United States, there is a phrase I hear from time to time that always gives me a moment of pause: The Politics of the Environment.  This sentiment is often accompanied by numerous arguments, pro and con, about different legislative matters pertaining to ecology, both locally and nationally.  At one level, this question of environmental politics is understandable, given that ecology has become a “line in the sand” for candidates on both sides of the political isle.  However, from the perspective of a Catholic Priest, I always cringe when the environment is reduced to such rhetoric.  The reason for this discomfort is that Catholic theology views creation first through sacramental eyes before we focus on how this gift should be used (or not used) to build up human dignity.  This piece will explore the sacramental worldview of the Church in the hopes of giving clarity on how Catholicism views creation.

The start of Catholicism’s sacramental worldview is literally “the beginning.”  In the first chapter of the book of Genesis, we hear the most basic, but beautiful affirmation of creation: It is good.  One of the more stunning parts of the first chapter of Genesis comes after all things are brought into being and God affirms, while looking upon the totality of creation, that what exists is “very good.”  It is this vision of goodness that also gives birth to our language of inherent dignity.  When the human person, a part of creation, is brought into existence, the unique quality of being made in God’s image and likeness is affirmed.  In this affirmation, humanity is called to have dominion over creation.  As I have mentioned in previous posts, the language of “subdue” and “dominion” found in Genesis does not condone exploitation of the land.  Rather, it is language that is taken from the ancient understanding of kingship in which the king was responsible for providing the resources necessary to feed his people, provide for a stable economy, and ensure the stability of the kingdom for future generations.  Exploitation of the land became a sign of ineffective leadership, as citizens suffered due to the lack of essential basics of life.  This is why the Catholic Church speaks of dominion in terms of stewardship, affirming Scripture’s call not to exploit the land for personal gain.  The intellectual seeds of this sacramental worldview can be found all throughout Sacred Scripture.  As an example, enjoy the poetic imagery from Psalm 104.

You made springs flow in wadies
that wind among the mountains.
They give drink to every beast of the field;
here wild asses quench their thirst.
Beside them the birds of heaven nest;
among the branches they sing.
You water the mountains from your chambers;
from the fruit of your labor the earth abounds.
You make the grass grow for the cattle
and plants for people’s work
to bring forth food from the earth,
wine to gladden their hearts,
oil to make their faces shine,
and bread to sustain the human heart.
The trees of the LORD drink their fill,
the cedars of Lebanon, which you planted.
There the birds build their nests;
the stork in the junipers, its home.
The high mountains are for wild goats;
the rocky cliffs, a refuge for badgers.
You made the moon to mark the seasons,
the sun that knows the hour of its setting.
You bring darkness and night falls,
then all the animals of the forest wander about.
Young lions roar for prey;
they seek their food from God.
When the sun rises, they steal away
and settle down in their dens.
People go out to their work,
to their labor till evening falls. (Psalm 104:10-23)

These pastoral images evoke a simple truth about creation: That which is from the Lord is a gift from the Lord and should be treated as such.  These and other Biblical images create the backdrop for the sacramental vision of the Church.  The simple gifts of water, oil, bread, and wine become the natural means by which God gives grace needed for salvation to the human person.  This language of natural gift used to bestow a supernatural gift is beautifully presented in the blessing of the water in the Baptismal Rite.

Father, you give us grace through sacramental signs,
which tell us of the wonders of your unseen power.
In Baptism we use your gift of water,
which you have made a rich symbol
of the grace you give us in this sacrament.
At the very dawn of creation
your Spirit breathed on the waters,
making them the wellspring of all holiness.
The waters of the great flood
you made a sign of the waters of Baptism,
that make an end of sin and a new beginning of goodness.
You freed the children of Abraham from the slavery of Pharaoh,
bringing them dry-shod through the waters of the Red Sea,
to be an image of the people set free in Baptism. (Easter Vigil, Catechism of the Catholic Church, 1217-1221)

This intimate connection between creation and God’s grace is not limited to water, but also extends to the elements of the other Sacraments; in particular, the Eucharist.  When we understand the significance of the Eucharist, we see that the bread and wine are the “essential matter” or the necessary gifts from creation that God uses to allow Christ’s Presence to be with us, nourish us, and assist us in the process of our sanctification. 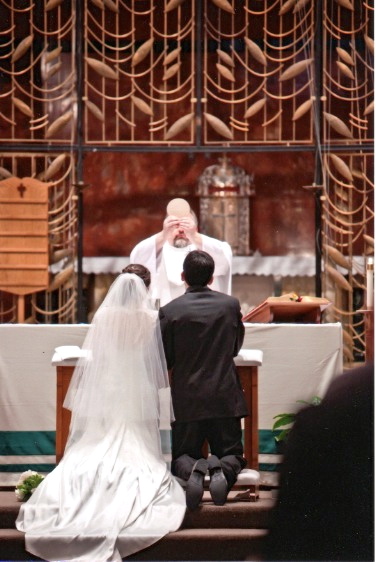 Picture from a wedding I celebrated a few years back. This depicts the meeting point of two great Sacraments: The Eucharist and Holy Matrimony.

The signs of bread and wine become, in a way surpassing understanding, the Body and Blood of Christ; they continue also to signify the goodness of creation. Thus in the Offertory we give thanks to the Creator for bread and wine, fruit of the “work of human hands,” but above all as “fruit of the earth” and “of the vine” – gifts of the Creator. The Church sees in the gesture of the king-priest Melchizedek, who “brought out bread and wine,” a prefiguring of her own offering.

In the Old Covenant bread and wine were offered in sacrifice among the first fruits of the earth as a sign of grateful acknowledgment to the Creator. But they also received a new significance in the context of the Exodus: the unleavened bread that Israel eats every year at Passover commemorates the haste of the departure that liberated them from Egypt; the remembrance of the manna in the desert will always recall to Israel that it lives by the bread of the Word of God; their daily bread is the fruit of the promised land, the pledge of God’s faithfulness to his promises. The “cup of blessing” at the end of the Jewish Passover meal adds to the festive joy of wine an eschatological dimension: the messianic expectation of the rebuilding of Jerusalem. When Jesus instituted the Eucharist, he gave a new and definitive meaning to the blessing of the bread and the cup. (Catechism of the Catholic Church, 1333-1334)

In light of this, we see a real, concrete relationship between created things of this world and how God bestows blessings upon the world through these gifts.  As I often share with my parish, the natural gifts of bread and wine also serve as a metaphor for the gift of ourselves as we present the “crushed wheat” and “crushed grapes” of our lives to the Lord so that they can be transformed into the “finest vintage” of God’s love in the world.  There are many angles we can take on these gifts (and the other material elements of all the Sacraments), but each example would bring us back to the same point of significance: There is an intimate connection, through the Sacraments (and especially the Eucharist), between God and creation.  It is from this standpoint, a sacramental standpoint, that Catholics view the importance of protecting our common home.  From this starting point, Catholics then move to the social aspect of ecology by asking, “Given the sacramental quality of creation, what are the moral, ethical, and social dimensions of ecology that we must consider?”  This question was beautifully reflected upon by Pope Emeritus Benedict XVI in his Apostolic Exhortation entitled Sacramentum Caritatis.

To develop a profound eucharistic spirituality that is also capable of significantly affecting the fabric of society, the Christian people, in giving thanks to God through the Eucharist, should be conscious that they do so in the name of all creation, aspiring to the sanctification of the world and working intensely to that end. The Eucharist itself powerfully illuminates human history and the whole cosmos. In this sacramental perspective we learn, day by day, that every ecclesial event is a kind of sign by which God makes himself known and challenges us. The eucharistic form of life can thus help foster a real change in the way we approach history and the world. The liturgy itself teaches us this, when, during the presentation of the gifts, the priest raises to God a prayer of blessing and petition over the bread and wine, “fruit of the earth,” “fruit of the vine” and “work of human hands.” With these words, the rite not only includes in our offering to God all human efforts and activity, but also leads us to see the world as God’s creation, which brings forth everything we need for our sustenance. The world is not something indifferent, raw material to be utilized simply as we see fit. Rather, it is part of God’s good plan, in which all of us are called to be sons and daughters in the one Son of God, Jesus Christ (cf. Eph 1:4-12). The justified concern about threats to the environment present in so many parts of the world is reinforced by Christian hope, which commits us to working responsibly for the protection of creation. The relationship between the Eucharist and the cosmos helps us to see the unity of God’s plan and to grasp the profound relationship between creation and the “new creation” inaugurated in the resurrection of Christ, the new Adam. Even now we take part in that new creation by virtue of our Baptism (cf. Col 2:12ff.). Our Christian life, nourished by the Eucharist, gives us a glimpse of that new world – new heavens and a new earth – where the new Jerusalem comes down from heaven, from God, “prepared as a bride adorned for her husband” (Rev 21:2). (Pope Emeritus Benedict XVI, Sacramentum Caritatis. 92)

The question of ecology has become an explosive one in our society in light of our current political cycle.  Something I fear that is being lost in the rhetoric is the simple truth that creation contains a sacramental character, a sacred character that cannot be ignored by people of Christian faith.  Share your thoughts on the theme of Catholic Social Teaching we call Care for Creation and, together, let us reclaim a sacramental vision of the world we live in.