If you like the history of astronomy, then you should attend one of the History of Astronomy Workshops that are held at the University of Notre Dame every other year.  The Fourteenth Biennial History of Astronomy Workshop was held this summer, June 19-22.  The Vatican Observatory Foundation helped sponsor the workshop this year.  After all, the workshop is a conference about astronomy and about history, and it is held at a major Catholic University.  So it is just the V.O.’s sort of thing.

Every Notre Dame workshop has a theme.  This year’s theme focused on the impact that images, both captured and created, have had on the history of astronomy.  A broad variety of images have served as a medium for advances and discoveries in astronomy, including

Every Notre Dame workshop features an invited speaker from overseas.  This year’s speaker was Dr. Omar Nasim, Professor for the History of Science at the University of Regensburg, Germany.  Dr. Nasim’s interdisciplinary research focuses on the practices of visualization and image-making in the observational sciences, especially 19th– and 20th-century astronomy.  His book Observing by Hand: Sketching the Nebulae in the Nineteenth Century, was the winner of the History of Science Society’s Pfizer Award in 2016.  He gave a public lecture entitled “The Astronomer’s Chair: A History of Sitting and Its Image” that talked about the portrayal of astronomers and their chairs.  In his talk Dr. Nasim noted how often pictures of astronomers show them with a chair.  He said that once you start to notice these chairs, you find that they are everywhere in the history of astronomy.  He talked about the cultural significance of displaying chairs in engravings and photographs for nineteenth-century audiences.  Specialized and task-specific observing chairs began to be designed and built by astronomers in greater numbers than ever before in the nineteenth-century.  Dr. Nasim argued that these mechanized chairs were often pictured not just for other astronomers but also for broader audiences.  The intent of all these chair images, he said, was to convey all sorts of messages to the broader public about who astronomers were, what their work was like, and how advanced they were over astronomers from other places and times.  His talk was the first of the conference, and so for the rest of the conference every time a chair appeared anywhere we all had to make some comment.  (Yes, the workshops are not overly formal.) 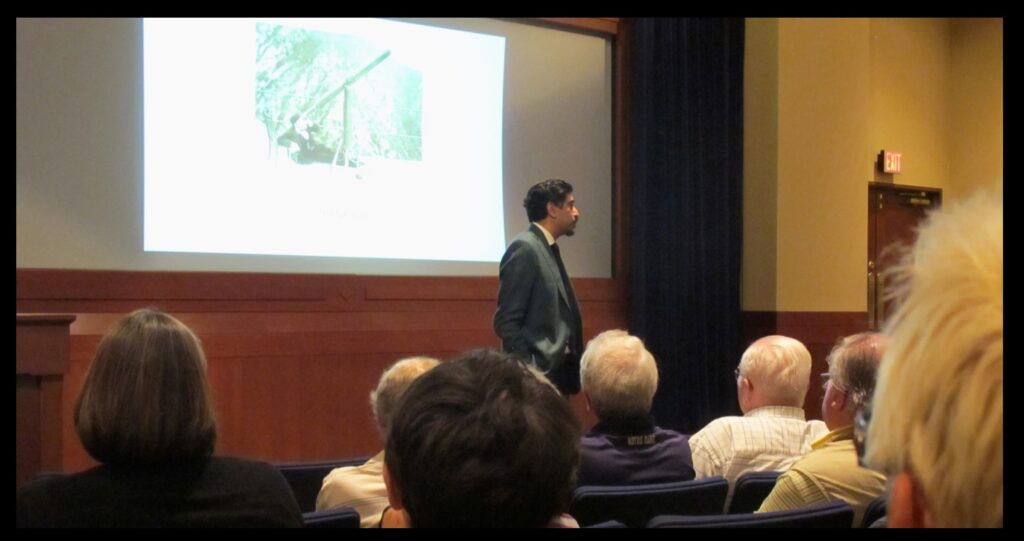 Lots of other image-related topics were covered in the workshop.  David DeVorkin of the Smithsonian chaired a series of talks on “Electronic Imaging and Sensing in Modern Astronomy” that featured four different people speaking on the development and use of electronic imaging in the 20th century.  There were talks about the use of imagery in public astronomy outreach, especially during the 19th century.

Of course I am going to plug anything that has to do with Kentucky and the Ohio River valley, so I have to highlight a talk by Trudy Bell of Sky & Telescope magazine on Ormsby MacKnight Mitchel—Kentucky native, builder of the Cincinnati Observatory—and the imagery in his popular public outreach talks.  Pedro Raposo of the Adler Planetarium chaired a series of talks on “Concepts of Space, Scale, and the Visual Culture of Astronomy” which had a very artistic bent.  Among the speakers in Raposo’s series was Isaac Facio of the Art Institute of Chicago, a textile artist who used jacquard looms to create an art installation at the Adler whose purpose was to reflect data about the broad structure of the cosmos.  There were even a couple of talks on how images of astronomers and observatories were used in marketing.  Sara Schechner of Harvard noted how “excitement over the opening of the world’s largest telescope in 1949—the 200-inch telescope at Palomar Observatory—was used to sell Buicks and bread.”  There were of course talks on familiar historical figures like Ptolemy and Galileo and William Herschel and Johannes Kepler.  And no conference on the history of astronomy would be complete without a lot of Catholic Church figures—presentations by Durruty Jesús de Alba Martínez, of the Universidad de Guadalajara (on images from rare works in the libraries of Mexico) and by Dana A. Freiburger, of the University of Wisconsin-Madison (on Fr. James Curley, S. J.) included a number of these.  One of my favorite talks was by Virginia Trimble of the University of California, Irvine: “Images of the Periodic Table That Encouraged the Discoveries of Nebulium, Helium, and Coronium”.  It was a favorite of mine because it was delightfully and stubbornly “old school”—her slides were all hand-drawn and typed (yes, with a typewriter—Google it if you don’t know what it is) which were then scanned into a file for projection onto a screen—scanned by someone else, I imagine!  All these are just a sampling of all the presentations—click here for the complete schedule of presentations; click here for all the abstracts of the presentations.

Usually the workshops include a trip to Chicago to the Adler Planetarium (the Adler co-hosts the conference along with the University of Notre Dame).  However, the Rolling Stones were playing at Soldier Field next door to the Adler, right at the time of the conference.  Traffic was expected to be bad enough to ruin any such trip.  So this year there was no Adler trip!

This was the fourteenth of these Notre Dame conferences, and one person who has been to all of them is Mike Crowe, who has been at Notre Dame in one fashion or another since the 1950’s.  Mike is an emeritus professor now, but he is one of the reasons the History of Astronomy Workshops got started in the first place.  Matt Dowd of the University of Notre Dame Press, who was Mike’s student “back in the day”, is the man who makes the conference happen every two years.  Matt gets help from a team of volunteers, too. 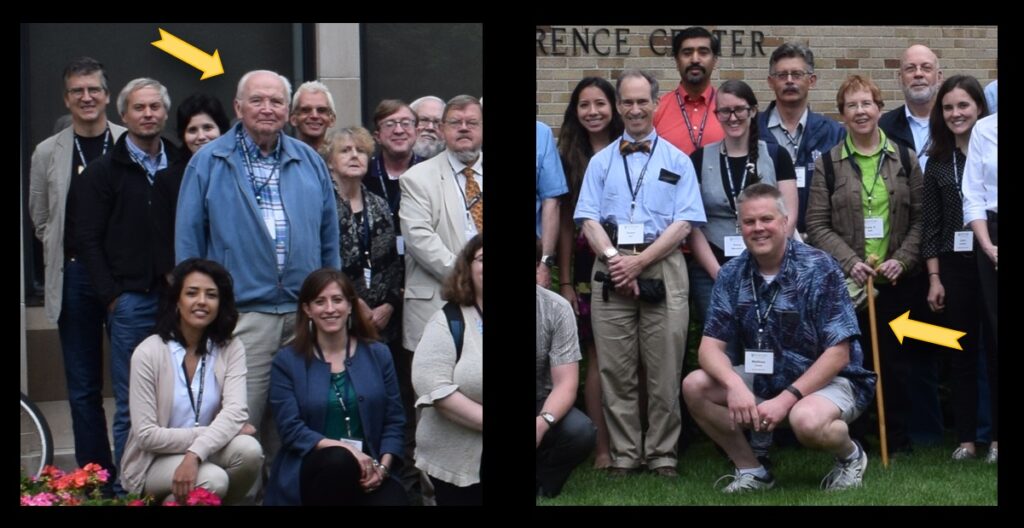 Mike and Matt have both been influential in my work, as has this conference.  I attended my first History of Astronomy Workshop in 2009, at the encouragement of Owen Gingerich who pointed out that it was not too far away, was a good conference, and was not overly expensive.  Because I attended that 2009 workshop I met Mike and Matt.  Mike made a point then of encouraging my work.  He has continued to offer encouragement ever since, and has provided some key bits of information at crucial times.  Matt ended up serving as editor for the two books of mine that the University of Notre Dame Press published.  Because of my work in the history of astronomy, including my first book with the University of Notre Dame Press, I ended up writing for Br. Guy and this blog.  So without these people, this conference, and the University of Notre Dame, I would not “be here”.