I gave a lecture about Light Pollution to the Michigan Electrical Contractors Association (MECA1953) on Monday March 16, 2015. I wanted to show how Light Pollution started, and has grown over time. The beginning of my lecture evolved into a “short history of humans using light”  – I learned quite a bit while doing the research for this lecture. 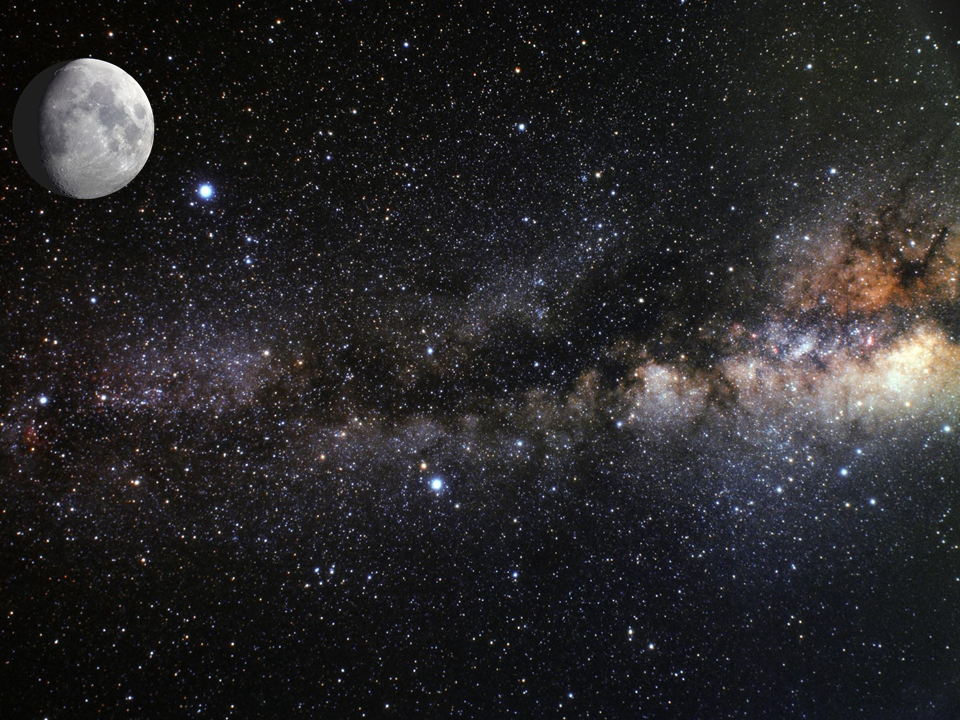 I started the lecture out out with the image above, and asked “How many of you have gone up north, and seen this?” Of the 17 people there, only 3 raised their hands.

I proceeded to talk about how humans started using light:
– The Moon and stars.
– Fire. (Stealthily, or cowardly, avoiding any mention of how long ago “Ancient Times” was…)
– Torches. (See fire)
– Oil lamps. (4500 BC)
– Candles. (3000 BC)
– The first street lights. (1000 AD) (Oil lamps)
– The Papacy actively supporting astronomy research in the 18th century, and building:
— The Observatory of the Roman College. (1774)
— The Vatican Observatory​. (1787-1789)
A member of the audience expressed great surprise that the Vatican had any interest in Astronomy.
– Gaslamps. (1792)
– Lighting of the exteriors of buildings via gas. (1802)
– Lighting of the interior of factories via gas. (1805)
– Gaslamps make their way to New York. (1827)
– Light bulb research by several individuals. (1835-1875)
– Electric light bulb. (1879) (Note: Edison did NOT invent the light bulb – he invented the first commercially practical incandescent light)
– Moontowers. (1880-1890’s)
– Creation of the National Electrical Code. (1897)
– Extravagant displays of lights at public events. (1897)
– Mt. Wilson Observatory looking over the scant lights of LA, with beautiful dark skies above. (1908)
– Increasing sky-glow from Rome makes observing impossible at the Vatican Observatory. Pope Pius XI relocates it to Castel Gandolfo. (1930’s)
– Increasing sky-glow from Rome interferes with observations at Castel Gandolfo. (1961)
– Invention of the first visible-spectrum LED. (1962)
– Invention of the first high-brightness, high-efficiency LEDs. (1976)
– Construction of the Vatican Advanced Technology Telescope at Mt. Graham, Arizona (1993)
– Invention of the first blue and white LEDs (1995)
– Mt. Wilson Observatory looking over LA, with a sea of lights, and an orange dome overhead. (2007)

I showed several images of Earth at night from space – zooming out as I went: Detroit, Michigan, the United States, the Earth. 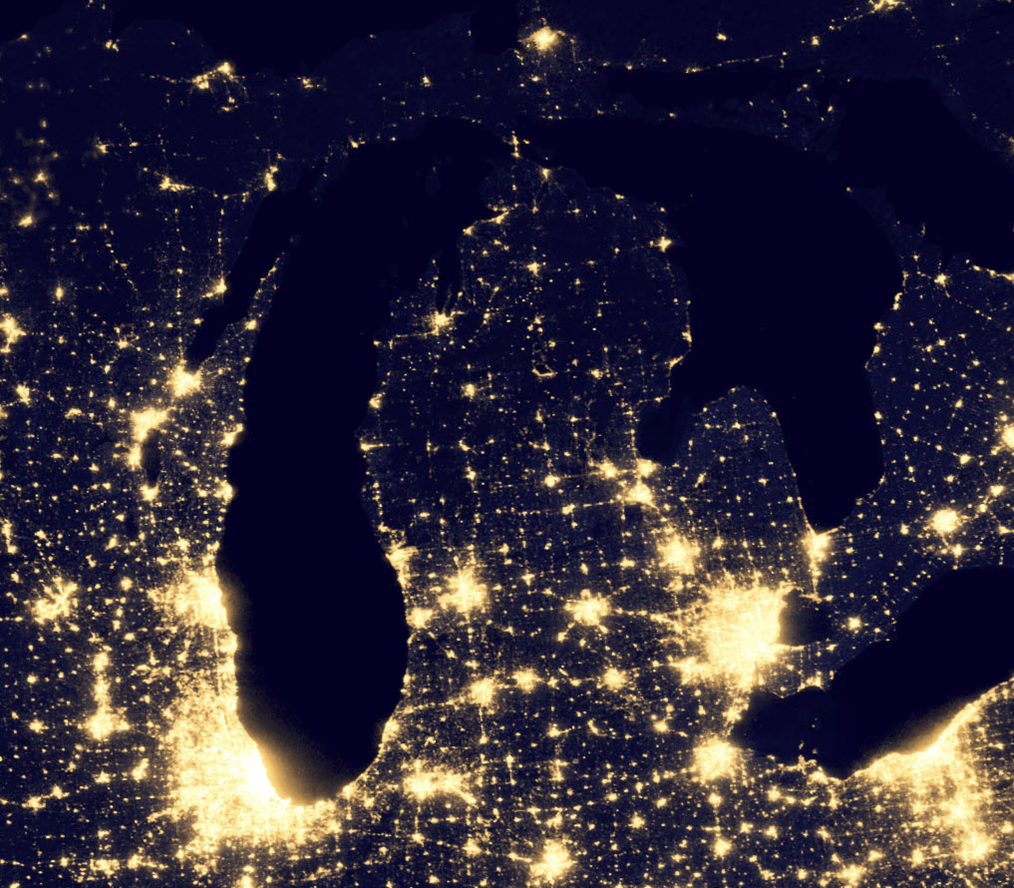 This image of the Michigan and surrounds at night is a portion of a larger composite assembled from data acquired by the Suomi NPP satellite in April and October 2012. Click the image to see the USA at night. Credit: NASA Earth Observatory/NOAA NGDC

When I showed the image of Michigan at night from space, a fellow commented that “It looks like stars…” I gave a toothy grin and said “Yesssss. They’ve been take from the sky” grabbing the air with my hand “and put on the Earth” and threw my handful of stars on the floor.

Another said “Did you see all the stuff on the east coast?” I smiled – the next several slides were close-ups of various regions around the continental US – including the east coast. I heard a few whisper “Man!” 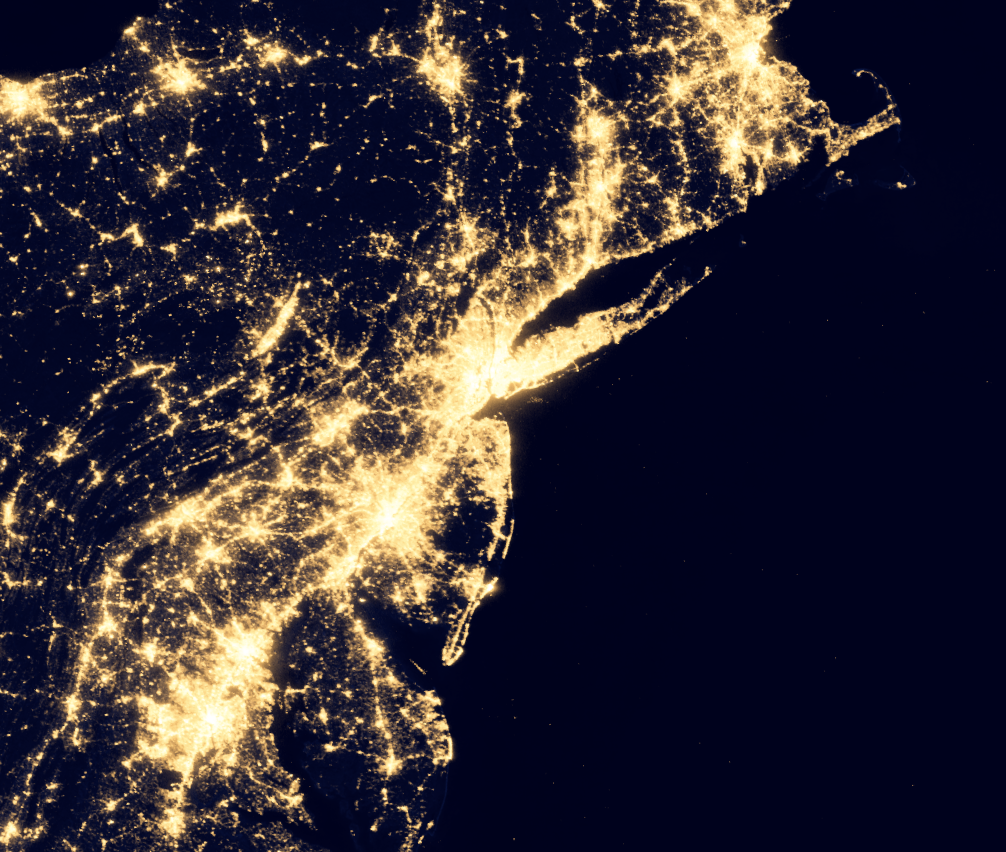 Continuing on I mentioned that in 2010, the UN stated that “For the first time in history, more people live now in urban than in rural areas,” and that “2/3 of the Earth’s population have NEVER seen a truly natural night sky. Most of those live under a perpetual orange dome.”

I related the story about a 1994 earthquake causing a power outage in LA. Residents who had never seen the Milky Way called local emergency centers and observatories to report a “strange giant silvery cloud” in the sky. 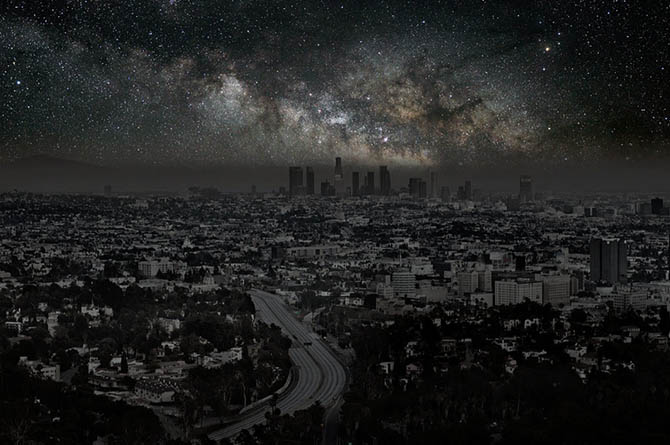 It was at this time I finally admitted to a room full of people who make their living installing electrical and lighting equipment that I was talking about Light Pollution.

I defined some Light pollution-related terms: Sky-Glow, Glare, Light Trespass, and Light Clutter. I related my own personal story about Light Trespass:

When I built my home, the subdivision did not have any streetlights, anywhere – I was thrilled. I used my telescope in my back yard all the time, it was awesome! Then, as the last house was finished being built in my sub, a streetlight magically appeared at the corner of my lot. It’s one of the types with the big glass bulb sticking out of the bottom of it. It helpfully illuminates the rooftops of several houses, and shines directly into my bedroom. 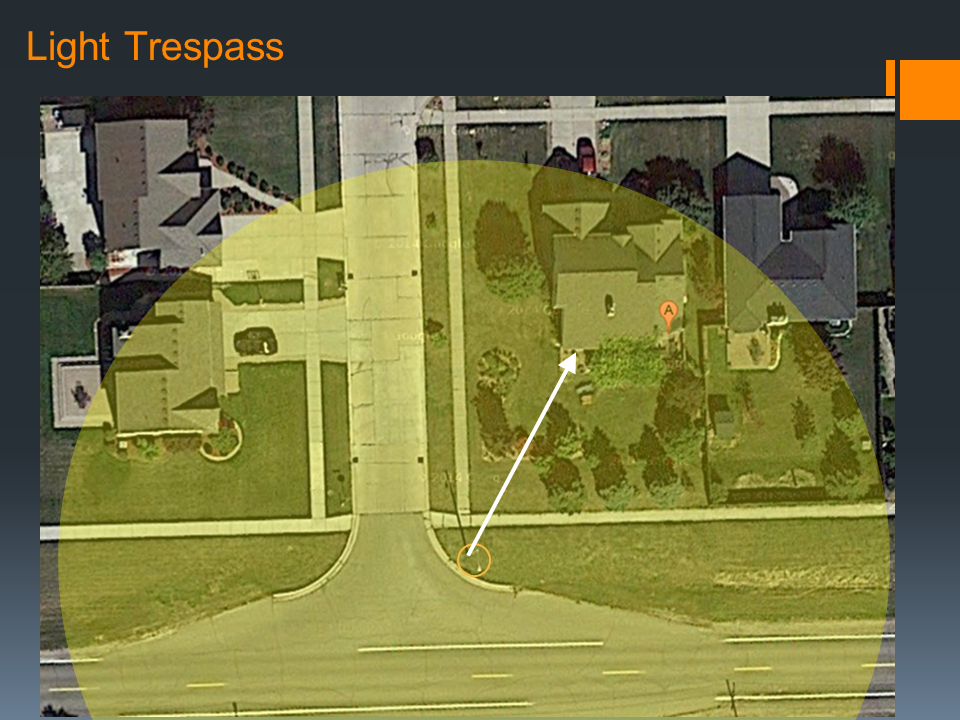 Bob’s home, and the streetlight on his corner. Image from Google Earth.

I was told that “If it is an Edison pole, you can call and ask to have the fixture replaced with a new shielded one.” Someone else suggested you can do that via the Edison website, and they’ll be even faster about it. I will investigate this immediately!

Continuing on, I talked about the effects of Light Pollution on the environment, and negative health effects on wildlife, and humans.

I mentioned the International Dark Sky Association, and that the Vatican Observatory Foundation was one of the their first institutional members. I talked about the IDA’s lighting policies, and guidelines, their model lighting ordinance, and dark-sky friendly lighting fixtures. 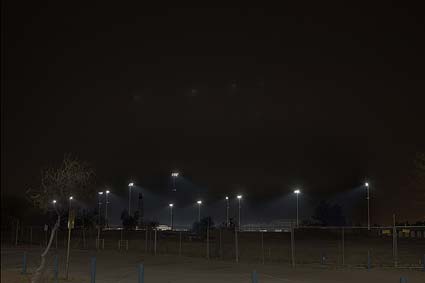 I showed nighttime images of sites with and without shielded lighting, and asked “Which would you rather live by?” I also talked about various state lighting ordinances, and showed the “dark sky preserve” legislation Michigan has enacted.

I did not get nearly the push-back I would have expected from a group of electrical contractors; I hope I may have brought something to their attention that they were previously unaware of, and that they at least give a passing thought to aiming lights down the next time they install them. If they curse my name every time they see the glare from a streetlight from now on – I’ll take that too.

Update: I forgot to mention, one of the suggestions I made was to use softer, redder lighting at night – especially if you’re reading in bed. Harsher blue-white light can contribute to disruption of the circadian rhythm. I just started using a app for the PC called f.lux that does this to your PC – it softens the PC screen color at night. No more blinding white screens when it’s dark outside!