What is Pi, and how do we know what it is?  In Part I of this Homemade Pi discussion we saw how the button for π (that is, Pi) on a calculator app returned 3.1415926535897932384626433832795—thirty-two digits—when pressed.  We saw how this value cannot be the result of measurement, for even if we could measure one of the silicon spheres made by the Australian Centre for Precision Optics (the “roundest objects in the world”) by counting individual atoms, we could not determine the value of Pi to even half the number of digits given by the calculator app.  Meanwhile any actually feasible measurement, done to machine-shop-level precision, would return a mere handful of digits.  Then how do we know that Pi is 3.1415926535897932384626433832795?  We know through reasoning it out.

Only recently have I learned how to reason out Pi, as the knowledge seemed potentially useful in helping students at my college to view mathematics more positively.  And you, O Reader, may not view mathematics so positively yourself.  Today’s post does involve some serious high-school math—hexagons, triangles, and the Pythagorean Theorem.  It also involves a lot of repetition.  The result obtained from bearing with the math and using reason to determine the value of Pi is pretty darned cool, and I encourage you to read this post to the end.  But, for those who would rather not make Homemade Pi—who are perfectly happy if someone else does the baking—I will cut to the bottom line, and save The Homemade Pi Recipe for the end (for those who want their Homemade Pi to be truly homemade, entirely from scratch)!

The bottom line is that we determine Pi to be 3.1415926535897932384626433832795 not through measurement but through reasoning, either as demonstrated in The Recipe below, or through one of the other methods mathematicians have devised for reasoning out the value of Pi.  According to Scientific American and the University of Chicago Research Computing Center, Christoph Grienberger calculated Pi out to forty digits—3.141592653589793238462643383279502884197—by the method described in The Recipe, and these are the most digits to ever be worked out by hand.  He published this value in his Elementa Trigonometrica of 1630.  And, pertinent to this Vatican Observatory blog, Grienberger was a Jesuit astronomer at the Collegio Romano (the V.O. is home to many Jesuit astronomers), and he is also the astronomer who invented the equatorial telescope mount.

Left—Title Page of Grienberger’s 1630 Elementa Trigonometrica; center—the value of Pi; right—‘Laus Deo’ (‘Praise to God’) at the end of Grienberger’s tables, which was doubtlessly an expression from the heart after grinding out Pi to so many digits, plus doing all the other calculations in the Elementa. 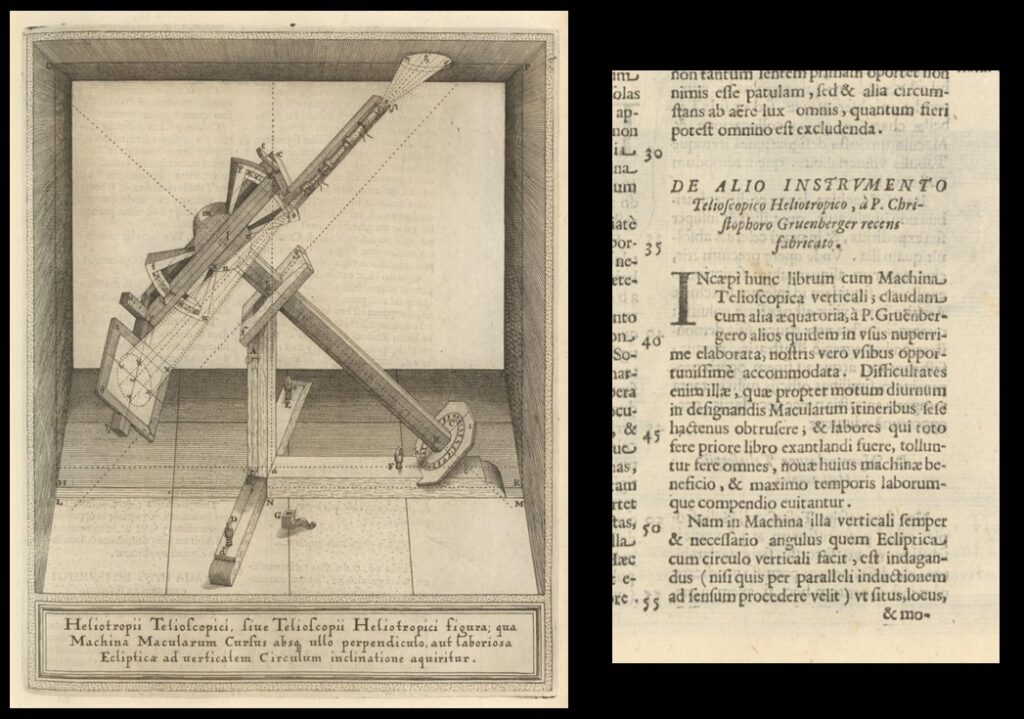 Left—Grienberger’s Equatorial mount (used for solar observations) as illustrated by Christoph Scheiner in his Rosa Ursina Sive Sol of 1630; right—Scheiner’s crediting of Grienberger.

Indeed human beings can reason Pi out to far more digits than even Fr. Grienberger did, especially if they do not have to do all the calculations by hand.  The Pi Day web page gives one million digits of Pi.  Moreover, it states that Pi has been determined to “over one trillion digits.”

Thus in the case of Pi we have reasoned our way to the infinite.  We know it is there.  We can learn more and more about it.  For example, within the infinite digits of Pi must be contained any string of digits you care to think up.  There is even a web page that will let you search for strings of digits within the first two billion digits of Pi.  According to the web page, Grienberger’s birthday, 7-2-1561, occurs at the 182,220th decimal digit of Pi, while the speed of light in miles per second, 186,000, occurs at the 2,352,935th decimal digit of Pi (if you prefer that in kilometers per second, 300,000, look to the 215,286th decimal digit).

But, as much as we learn about Pi, we will never know even the smallest fraction of the infinity that is there.  And Pi is just one number—the Circumference of a circle divided by the Diameter of that same circle.  And you cannot go out and prove this, or the trillion digits, or the speed of light occurring at the 2,352,935th decimal, by measurement.  Measurement gets you only a handful of digits of Pi. 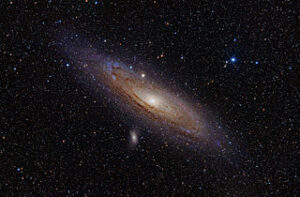 Now consider astronomy.  What can we prove by measurement about, for example, the Andromeda Galaxy?  Can we roll out a tape measure and use it to check our estimations of that galaxy’s diameter?  Can we use a balance to check our estimations of its mass?  Do we have a calendar and baby pictures by which we can make sure we got its age right?  In every case, we cannot.  We know what we know about Andromeda through reasoning.  Yes, our reasoning is based on measurements made from Earth, but we will never be able to measure the mass of the Andromeda Galaxy the way biologists measure the mass of lab rats fed on one diet versus another.

So take a look at The Recipe below.  Take a gamble on trying to understand how you might determine the value of Pi for yourself, through reason, even if you don’t like math.  This simple number says much about how we come to know what we know. 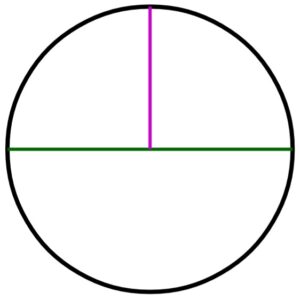 Next, inscribe a hexagon in the circle, like this: 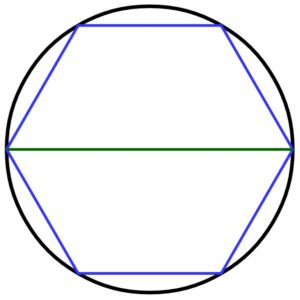 Now, divide that hexagon into equilateral triangles, like this: 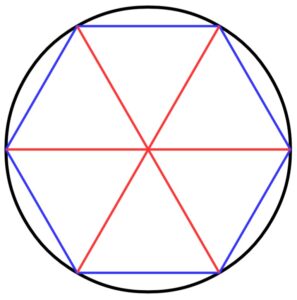 Because these are equilateral triangles, each side of each triangle is equal to the Radius R of the circle, or 1.  Therefore the perimeter of the hexagon (blue), which is composed of six triangle sides, is 6.

But that is a poor approximation!  So now draw another radius R (purple, below) on the circle, perpendicularly dividing one of the sides of the hexagon (green) into two equal parts. 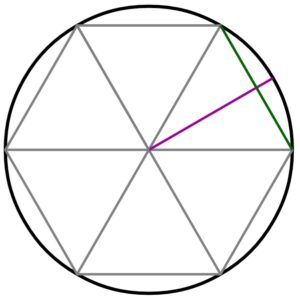 Next, draw lines (red, below) from the end of that radius to the vertices of the old hexagon. 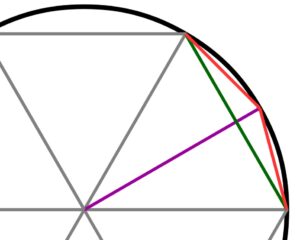 In this way you can start to construct a twelve-sided figure, a dodecagon.  The dodecagon is a closer approximation to the circle. 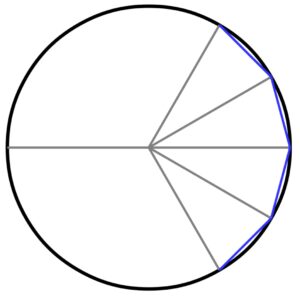 But what is the length of a side of the dodecagon?  To reason this out, think about a triangle ABC that has two equal sides, AC and AB, each of length 1 (because AC and AB are also radii of the circle). 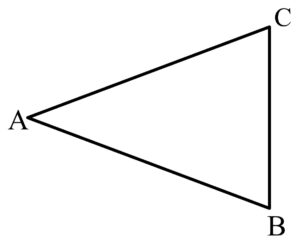 Then think about dividing side CB perpendicularly into two equal parts, eC and eB, using a new line AD (also of length 1, in purple below), and forming new triangles AeC and CeD.  These are both Right Triangles.  This means you can use the Pythagorean Theorem on them. 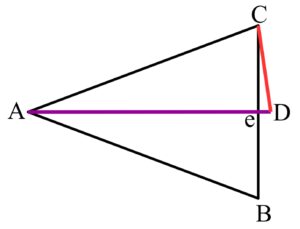 CB is a side of the hexagon, so its length is 1.  The length of side eC is half that, or 0.5.  The Pythagorean Theorem applied to triangle AeC says

Now, the line AD is divided up into Ae and eD.

Again, back to the Pythagorean Theorem, this time applied to triangle CeD:

You have now reasoned out that the length of one side of the dodecagon is 0.517638.  Therefore the perimeter of that 12-sided dodecagon is 12×0.517638=6.21166.  Supposing once again this perimeter to be approximately the Circumference C of the circle, you can calculate that Pi is approximately

This is a better value.  But if a dodecagon with its 12 sides is better than a hexagon with 6 sides, it stands to reason that a 24-sided figure will be better still!

Note that by means of this process you have through reason already determined Pi to as many digits as might be possible through measurement, even if you could measure at the atomic level in the roundest object in the world (which you can’t)!  And, whereas measuring at the atomic level would be the best you could do with measurement, you can keep going with reason, as shown in the table below, and as Grienberger did.

Through repeating this process, you can, with patience, make Homemade Pi to as many digits as you want.  We know what Pi is through reasoning!  And mathematicians have come up with many other, more manageable methods of calculating Pi than this, all based on pure reason.