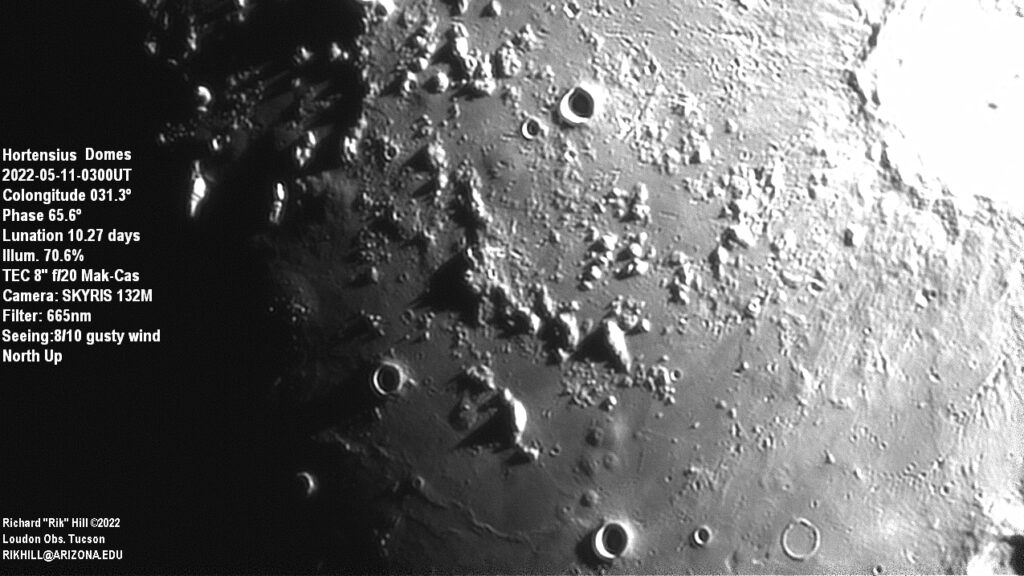 This is a fun region at this one day after sunrise on Copernicus. In fact that is Copernicus in the upper right corner of this image, grossly overexposed on purpose, processed to bring out low contrast details along the terminator. At the bottom middle edge of this image is the crater Hortensius (15km dia) and just above it are some lunar domes. Five are readily visible at first glance but below and to the left of the bottom one is yet another, lower or flatter dome bringing the total to 6 domes in a cluster! Five of them have the central pits, ranging 2-3km in diameter, and all these domes are in the 6-8 km diameter range. These domes are pyroclastic vents formed by very viscous lava similar to small shield volcanoes. The height of these domes is only a few hundred meters which is why they are best seen when the sun is low.

Above and to the left of Hortensius is another similar sized crater, Milichius (14km) which has a nice dome to the left of it, still in shadow here. Forming a right angle with these two craters, to the upper right, is another similar sized crater, Tobias Mayer C (16km) with a grand dome (Milichius 4 or M4) to the right of it, double the size of the Hortensius domes. Moving on a line from TB-C through the M4 dome and double that distance you’ll see another large dome (Milichius 2) among the mountain peaks. There are many more domes in this area. You can see many of them at: Lunar Dome Atlas ALPO/BAA (lunardomeatlas.blogspot.com/). So go out and search whenever the Sun is low in this area, you will be rewarded!