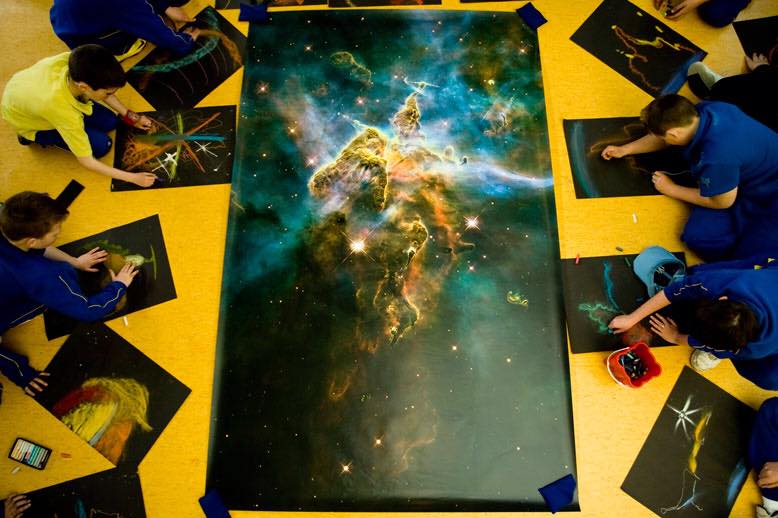 The Hubble 20th anniversary print of the Carina Nebula. The image is surrounded by children from St Peters NS in Dublin. They are drawing sections of it as drawing the entire 8 X 5 print was very difficult. The children had never seen anything like it in their lives before. Image credit Bernard Kelleghan

Ten years ago this week was the 20th anniversary of the Hubble Space Telescope. The Carina Nebula was the image of choice by both The European Space Agency and NASA to mark the 20th Anniversary of Hubble. ESA offered a large print for outreach education at the time, I applied to get one. This is an enormous high-resolution photograph on excellent quality paper. I know the print is strong because I have been using it in my workshops since 2010. The print it is still as good as the day I received it. It is  8 foot X 5 foot, truly huge and very impressive.

April 23rd 2010 was the first time I used it in a workshop. I took it along to St Peters National School in Dublin. My presentation used the image to tell the story of the birth life and death of stars. The image shows a section of a powerful and beautiful star-forming region in the constellation Carina. This constellation is only visible from the southern hemisphere. It was therefore doubly engaging that this extraordinary image was also playing a part in informing young pupils about the view of the sky from a different location on the planet.

Nature created this awesome visually rich stellar nursery. Hubble became the servant who has worked so long to bring the wonders of our surrounding universe down to Earth.

In May of that year, one of my workshops was for St Bridgit’s NS in Greystones Co Wicklow. As the classroom was too small to do a drawing workshop I challenged the children to write short poems instead. They were to be based on the presentation and their new knowledge about stars. Another workshop around the same time was for Delgany Brownie Troop.

So I merged the poems from Greystones and the drawings from Delgany in an exhibition for the public in the library in Greystones . It was a way of assisting the families and the general community to engage with the children’s achievements. Simultaneously it applauded the very positive efforts of young children from local educational organisations.

The 20th Anniversary print went on to do outreach to many more groups over the years. Even though the children were young at least it gave them a start on being aware that stars are born, live their lives, mature and die. Awareness also that in some cases stars facilitated the formation of planets. A small peep into stars and our star.  If life was normal I would be doing a Hubble 30th workshop but alas the new normal has no place for it.

However you can get the kids busy here with ESA’s art challenge  click in,  just launched today April 24th

Here are a few of the poems

Cool blasts of light shoot from the cloud Nebula,

As new stars are born.

No one has even been that far,

Colourful explosions burst in the air

A sight you cannot believe.

Inspiring stuff way up there.

A hypnotising wonder which explodes into dust

I have not seen such an amazing sight.

Not fake, it is real.

Plus a few images

Today April 24th brings us the 30th anniversary of the Hubble Space Telescope. ESA has a live Q&A on the subject, details below. 30 years of stunning images and knowledge gained. 30 years of bringing the wonders in space to Earth.

ESA invite to join a livestream on Friday April 24th 2020

Join us tomorrow, Friday 24 April, for a livestreamed conversation in Hubble 30th Anniversary Live with experts from around the world to mark the 30th anniversary of the iconic observatory.

On 24 April 2020, the NASA/ESA Hubble Space Telescope celebrates 30 years of science discoveries that have revolutionised nearly all areas of current astronomical research, from planetary science to cosmology, and its countless pictures that are unmistakably out of this world.

You can ask your questions in the comments using #Hubble30Live.
Watch here: https://www.facebook.com/EuropeanSpaceAgency/videos/551695642151910/