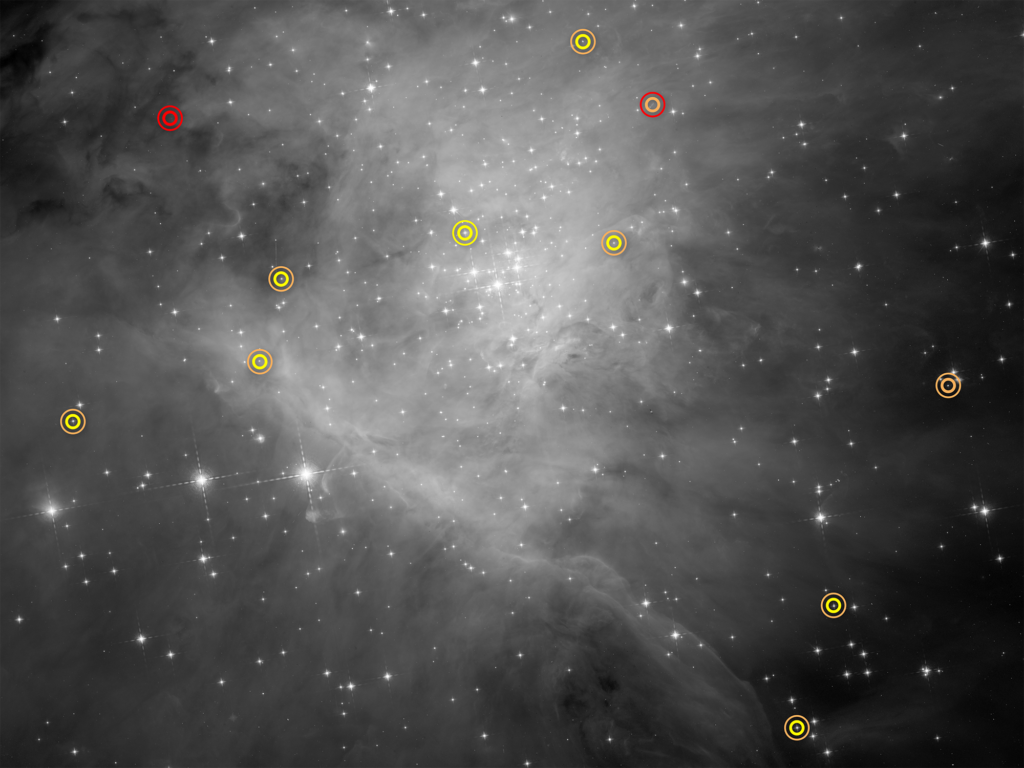 In an unprecedented deep survey for small, faint objects in the Orion Nebula, astronomers using NASA’s Hubble Space Telescope have uncovered the largest known population of brown dwarfs sprinkled among newborn stars. Looking in the vicinity of the survey stars, researchers not only found several very-low-mass brown dwarf companions, but also three giant planets. They even found an example of binary planets where two planets orbit each other in the absence of a parent star.

Brown dwarfs are a strange class of celestial object that have masses so low that their cores never become hot enough to sustain nuclear fusion, which powers stars. Instead, brown dwarfs cool and fade as they age. Despite their low mass, brown dwarfs provide important clues to understanding how stars and planets form, and may be among the most common objects in our Milky Way galaxy.

Located 1,350 light-years away, the Orion Nebula is a relatively nearby laboratory for studying the star formation process across a wide range, from opulent giant stars to diminutive red dwarf stars and elusive, faint brown dwarfs. 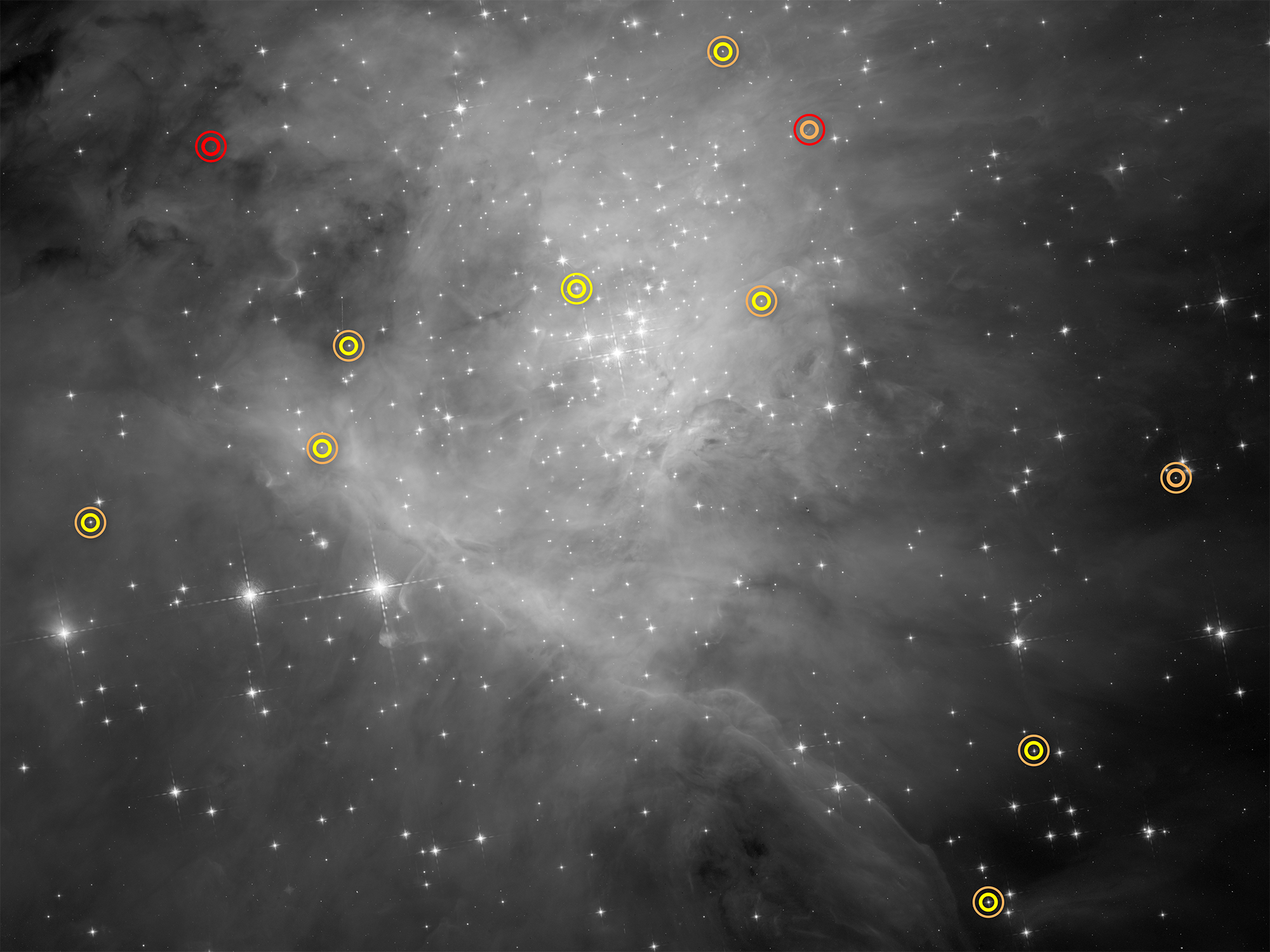 This image is part of a Hubble Space Telescope survey for low-mass stars, brown dwarfs, and planets in the Orion Nebula. Each symbol identifies a pair of objects, which can be seen in the symbol’s center as a single dot of light. Special image processing techniques were used to separate the starlight into a pair of objects. The thicker inner circle represents the primary body, and the thinner outer circle indicates the companion. The circles are color-coded: red for a planet; orange for a brown dwarf; and yellow for a star. Located in the upper left corner is a planet-planet pair in the absence of a parent star. In the middle of the right side is a pair of brown dwarfs. The portion of the Orion Nebula measures roughly four by three light-years. Credits: NASA , ESA, and G. Strampelli (STScI)

This survey could only be done with Hubble’s exceptional resolution and infrared sensitivity.

Because brown dwarfs are colder than stars, astronomers used Hubble to identify them by the presence of water in their atmospheres. “These are so cold that water vapor forms,” explained team lead Massimo Robberto of the Space Telescope Institute in Baltimore, Maryland. “Water is a signature of substellar objects.  It’s an amazing and very clear mark. As the masses get smaller, the stars become redder and fainter, and you need to view them in the infrared. And in infrared light, the most prominent feature is water.”

The Hubble team identified 1,200 candidate reddish stars.  They found that the stars split into two distinct populations: those with water, and those without. The bright ones with water were confirmed to be faint red dwarfs.  The multitude of fainter water-rich, free-floating brown dwarfs and planets within the Orion nebula are all new discoveries. Many stars without water were also detected, and these are background stars in the Milky Way. Their light was reddened by passing through interstellar dust, and therefore not relevant to the team’s study.

The team also looked for fainter, binary companions to these 1,200 reddish stars. Because they are so close to their primary stars, these companions are nearly impossible to discover using standard observing methods.  But by using a unique, high-contrast imaging technique developed by Laurent Pueyo at the Space Telescope Science Institute, astronomers were able to resolve faint images of a large number of candidate companions.

This first analysis did not allow Hubble astronomers to determine whether these objects orbit the brighter star or if their proximity in the Hubble image is a result of chance alignment. As a consequence, they are classified as candidates for now. However, the presence of water in their atmospheres indicates that most of them cannot be misaligned stars in the galactic background, and thus must be brown dwarfs or exoplanet companions.

“We experimented with a method, high-contrast imaging post processing, that astronomers have been relying on for years. We usually use it to look for very faint planets in the close vicinity of nearby stars, by painstakingly observing them one by one,” said Pueyo. “This time around, we decided to combine our algorithms with the ultra-stability of Hubble to inspect the vicinity of hundreds of very young stars in every single exposure obtained by the Orion survey. It turns out that even if we do not reach the deepest sensitivity for a single star, the sheer volume of our sample allowed us to obtain an unprecedented statistical snapshot of young exoplanets and brown dwarf companions in Orion.”

Artist’s concept of a brown dwarf with a planetary companion in the Orion Nebula. Image credit: Universe Sandbox ²/ Bob Trembley

Combining the two unique techniques, imaging in the water filters and high-contrast image processing, the survey provided an unbiased sample of newly formed low-mass sources, both dispersed in the field and companions of other low-mass objects. “We could reprocess the entire Hubble archive and try to find jewels there,” Robberto said.

Finding the signatures of low-mass stars and their companions will become much more efficient with the launch of NASA’s infrared-sensitive James Webb Space Telescope in 2019.

The Hubble Space Telescope is a project of international cooperation between NASA and ESA (European Space Agency). NASA’s Goddard Space Flight Center in Greenbelt, Maryland, manages the telescope. The Space Telescope Science Institute (STScI) in Baltimore, Maryland, conducts Hubble science operations. STScI is operated for NASA by the Association of Universities for Research in Astronomy, Inc., in Washington, D.C.

For images from this Orion Nebula study and more information about Hubble, visit: www.nasa.gov/hubble or http://hubblesite.org/news_release/news/2018-03